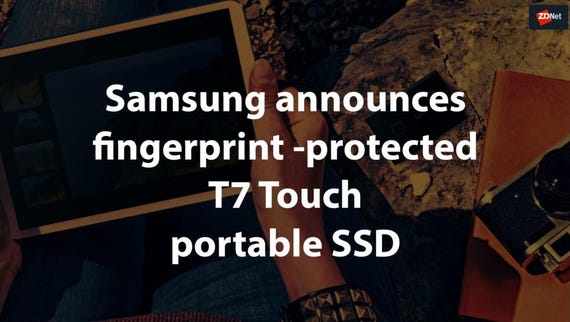 The T7 Touch features a fast SSD drive -- with read speeds of 1,050MB/s and write speeds of 1,000MB/s -- that makes use of the USB 3.2 Gen 2 standard and is encased in a sleek and durable aluminum that weighs only 58 grams and yet is capable of withstanding a two meter drop.

Must read: Upgrade your office with these tools and gadgets

But it's the fingerprint reader that really makes the T7 Touch stand out. Users can simply and quickly access data by pressing a finger on the reader, and LEDs indicate if the drive is locked or unlocked.

Up to four fingerprints can be inputted into the drive, allowing multiple users to gain access to the data. The data is also secured by a password, and encrypted using AES 256-bit hardware data encryption.

The innovation crammed into the Samsung T7 Touch has been recognized at the CES 2020 Innovation Awards.

"Consumers who are constantly on the go between work, play and passion projects want to be able to securely carry their content with them," said Dr. Mike Mang, vice president of Brand Product Biz Team, Memory Business at Samsung Electronics. "Now their data is secure thanks to the fingerprint recognition functionality incorporated into the product, which delivers industry-leading transfer speeds in a compact form factor."

As far as compatibility is concerned, the T7 Touch works with iOS, Windows, macOS, and Android devices.

The T7 Touch is available this month, and will be followed in Q2 by the T7, which is a similar drive but without the fingerprint reader.