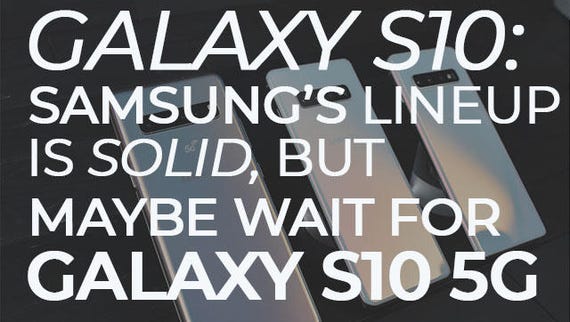 Samsung has unveiled a fresh slate of new smartphones. There's five different phones, but only three -- the Galaxy S10E, S10, and S10 Plus -- are available to pre-order now.

Those of you confused about how they differ should read ZDNet's helpful guide. If you've already figured out which model is best for you and now want to know how much it costs, how you can pre-order or buy it online, and whether there are any deals available for it, you've arrived at the right place. We've laid out everything you need to know below.

The S10E is the the so-called "budget" model this year. But we can't actually say it's cheap, as that's relative. It starts at $749.99 for 128GB of memory, for instance, and it goes up to $849.99 for 256GB of memory. That price gets you the same high-end CPU found in the other models, but also less RAM, a dual camera setup instead of a triple, a flat screen with no curved edge, and a standard fingerprint sensor on the power button.

You can now pre-order all three phones. Pre-orders opened Thursday, Feb. 21 at 12:01am ET. They will ship from Friday, March 8, which is also when the phone becomes available to purchase directly from retail stores and carriers.

The easiest way to pre-order is from Samsung. You can use Samsung.com or the Shop Samsung app on an Android device to order an unlocked model or carrier-specific model.  However, if you'd like to explore your options, we've provided some links below so you can easily purchase through whichever retailer or carrier you prefer.

We suggest you buy your phone unlocked, as you'll be able to use it with any carrier.

How to get free Galaxy Buds with your pre-order

If you pre-order the S10 or S10 Plus by March 7, Samsung will give you a free pair of its new wireless earbuds, the Galaxy Buds. That's a $130 value. To take advantage of this offer, download the Shop Samsung app, register your purchase, and Samsung will ship your Galaxy Buds. This promotion is valid no matter where you buy your new Galaxy device.

Here are the best deals each of the major US carriers and US retail stores are currently offering on the S10E, S10, and S10 Plus, along with some of their fine print.

Verizon is offering a free $750 Galaxy S10E when you order a S10 or S10 Plus. You need to open new line of service, and Verizon will pay for the phone over 24 months. Still, this is effectively a buy-one-get-one-free promo. As for your monthly payment for the model you bought, here's how that breaks down: The S10E starts at $32 per month, the S10 starts at $38 per month, and the S10 Plus starts $42 per month -- all over 24 months.

Xfinity will give new customers a $250 Visa gift card if they port their number before April 7.

Best Buy is offering up to $650 off an S10 with an eligible trade-in device.