Samsung's next pair of foldable phones share a lot of the same features, but there are some key differences.
Written by Jason Cipriani, Contributing Writer on Aug. 11, 2021 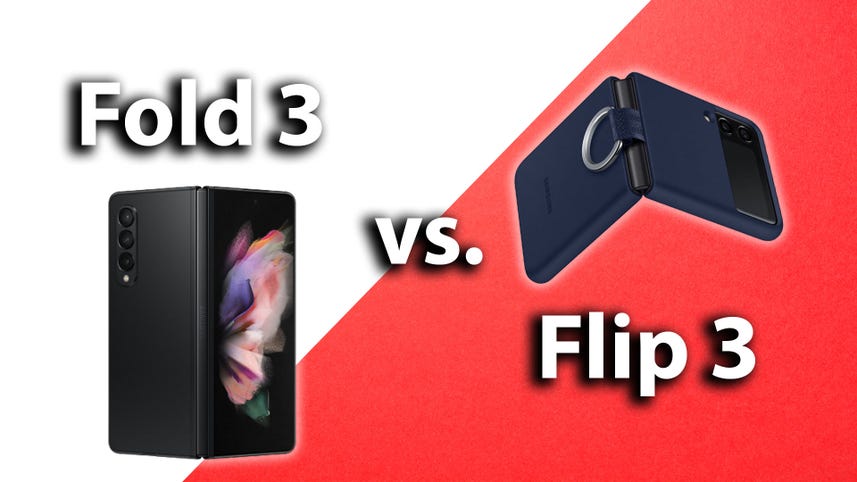 It feels like it was just a few months ago when Samsung debuted the original Galaxy Fold -- its first smartphone with a display that actually folds and bends. And now the company has seemingly killed off the Note line in favor of two smartphones, each of which with a unique approach to the foldable phone market.

At first glance, it's apparent the Galaxy Z Fold 3 and Galaxy Z Flip 3 are two totally different devices. Let's take a closer look at some of the more notable differences between the two phones.

Samsung Galaxy Z Fold 3 vs. Galaxy Z Flip 3: It's all about how it opens

Outside of the obvious overall design, one of the biggest differences between the Galaxy Z Fold 3 and Galaxy Z Flip 3 is how they both fold, or open. The Fold opens like a book, while the Flip opens like an old flip phone.

If you have a hard time remembering which device is which, the respective names of the phones make it easy to remember. The Fold folds open horizontally to reveal a tablet-like display, while the Flip opens vertically to reveal a standard smartphone-like display.

Both foldable phones have two screens. One on the front, and one on the inside. Samsung refers to the front display as a Cover screen on both models.

On the Galaxy Z Fold 3, the cover screen is 6.4-inches and acts as the display on a standard smartphone. You can tap and swipe around the interface just like you would on a Galaxy S21, any other Android phone or an iPhone.

On the Galaxy Z Flip 3, the cover screen is smaller, measuring 1.9-inches. Its primary purpose is to give you a glimpse at the information in an email alert, text message or even as a viewfinder to take a selfie.

When you open either phone while viewing an alert or app on the cover screen, you'll find that the app is open and ready for you on the main screen.

Samsung has stated a few different times it's committed to making foldable phones more affordable. With the Galaxy Z Fold 3 and Galaxy Z Flip 3, the company has made some progress. Although, in the case of the Galaxy Z Fold 3, the new pricing likely isn't low enough for wide consumer appeal.

Without a new Galaxy Note for Samsung S Pen stylus fans, Samsung had to pick a device that would work with the digital pen. That device is the Galaxy Z Fold 3.

You'll need to buy the S Pen separately, as Samsung isn't including one in the box. Also, the pen will only work with the main display of the Galaxy Z Fold 3, so you'll have to open the phone in order to jot down notes.

Samsung created an S Pen Fold Edition specifically for the Galaxy Z Fold 3. It'll work with Air Commands, but lacks any of the finer Bluetooth features found in the S Pen Pro like Air Actions for controlling your device from across the room.

For those who prefer a straight-up spec comparison, you can browse at your leisure below. You'll notice there are a lot of similarities between the two.

Smartphones
Samsung Galaxy Z Fold 4 vs Galaxy Z Flip 4: Key reasons to buy one over the other