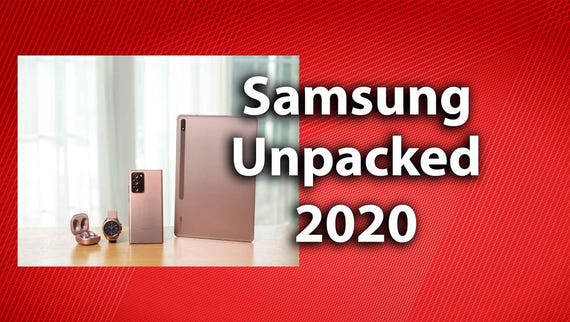 After months of leaks, rumors and speculation, Samsung just made the Note 20 and Note 20 Ultra official. The two smartphones were announced at the company's latest Unpacked event, where it also announced the Galaxy Buds Live , Galaxy Watch 3 and two new tablets in the Tab S7 and Tab S7 Plus .

If you've been following Note 20 news in the recent weeks and months, you probably weren't all that surprised with Samsung's announcement. For those who weren't following along, that's alright. We'll break down the two phones below and fill you in on all the details.

The best Samsung phones Samsung offers a range of smartphones -- with the A-series, S-series, Note line, and new foldables.

What will the new Galaxy Note be called?

Unlike the S20 line's three different models, the Note 20 and Note 20 Ultra are all you have to choose from.

The Note 20 and Note 20 Ultra look similar, save for size and the camera bump on the back. Otherwise, the Note 20 looks really similar to last year's Note 10 mixed with the S20 line.

The photos above appear to be the Note 20, not the Ultra. You can tell by the camera bump. Here's the Note 20 Ultra.

Qualcomm recently announced the Snapdragon 865 Plus mobile processor, and that's exactly what you'll find in the Note 20 and Note 20 Ultra. The slightly upgraded processor adds a 10% boost in CPU and GPU performance, breaking the 3GHz frequency threshold. Like the standard 865 processor, it includes 5G connectivity.

Here's a breakdown of the rest of the Note 20 and Note 20 Ultra's specifications.

You'll notice the standard Note 20 doesn't really offer all of the premium features we're accustomed to seeing in the Note line. It lacks a microSD card, improved display and faster refresh rate, and only comes in one build with 128GB of storage. Combine that with lack of external storage, and you're out of luck should you run out of space.

The Note 20 Ultra is the Note that most people will want and should buy, thanks to the faster display, bigger screen, larger battery, and improved memory and storage. Oh, and, yes, it has microSD support. Heck, even the S Pen experience on the Ultra will be better.

Not mentioned on the spec sheets are new features like an improved Samsung Notes app, more S Pen gestures to control the Note from across the room, and a multi-microphone support for recording up to 8K video on the Note.

How much will Galaxy Note 20 cost?

Are you looking forward to either device? If so, which one and why? Let us know in the comments.