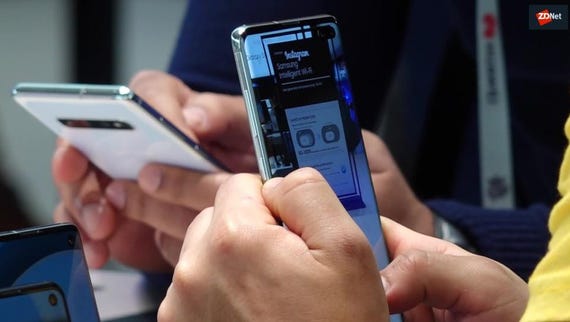 With Samsung's new DRAM, smartphones will have more memory than many laptops
Watch Now

The Notebook 7 is available with a choice of 13.3-inch and 15.6-inch displays, with the larger option possible to configure with either Intel UHD graphics or Nvidia GeForce MX250 discrete graphics.

The diamond-cut metal Notebook 7 laptops feature Full HD resolution displays with thin bezels, Intel 8th generation Core CPUs and can be configured with up to 16GB of LPDDR3 RAM and up to 512GB of SSD storage. The 15-inch model also offers the option of adding one more SSD thanks to a dual SSD slot.

While the notebooks bear some resemblance to the MacBook Pro, Samsung has kept more port options available, including one USB-C port, two USB 3.0 ports, HDMI, a microSD slot, and a 3.5mm headphone jack. And of course, these notebooks aren't encumbered by the MacBook Pro's problem-prone, butterfly-mechanism keyboard.

Samsung's new laptops could be a tempting option for those looking at a new MacBook Pro or Microsoft Surface device.

The Notebook 7 starts at $1,000 and will be available on July 26 in the US from Samsung's website and via Amazon, according to ZDNet sister site CNET. The laptops are available in black and silver.

Samsung is aiming the Notebook 7 Force at content creators and gamers. The laptop will start at $1,500.

It shares the same display and CPU specs as the Notebook 7 laptops but can be configured with up to 24GB of DDR4 RAM and comes with up to 512GB SSD store with the two extra slots for one 2.5-inch hard drive and one SSD.

More on Samsung and Windows 10 laptops