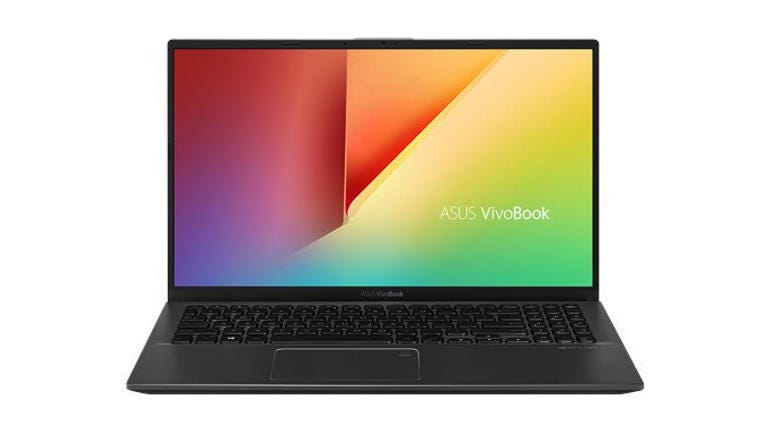 There are several sub-brands in the Asus VivoBook line: the top-end Pro series offers discrete graphics as a key feature; the S series has wide appeal and comes in a range of colours; and the VivoBook Flip series does the 360-degree trick. Meanwhile, the VivoBook 15 X512, reviewed here, offers up to an 8th generation Intel Core i7 processor and Nvidia discrete graphics, although the entry-level model, at a shade over £400, has a significantly lower spec. There are also 14-inch and 17-inch variants available.

The VivoBook 15 X512 was launched at CES earlier this year, and features a 'NanoEdge' bezel, plus Asus's rather nifty ErgoLift hinge.

There is an option for discrete graphics, and as already noted the VivoBook X512 can handle up to an 8th generation Intel Core i7 Whiskey Lake U processor. The only model I could find on sale in the UK at the moment is the £429.99 (inc. VAT) version, which lacks discrete graphics and is powered by an Intel Pentium Gold 4415 processor with 4GB of RAM, a 256GB SSD, a 1,920-by-1,080 display and no keyboard backlight.

The plastic chassis is reasonably robust, although I was able to flex the lid and you'll probably want to use a sleeve to protect the laptop in transit. It's quite heavy, at 1.7kg, and the footprint is reasonably large too so it's not going to fit in smaller backpacks or bags. For the record, the measurements are 357.2mm wide by 230.4mm deep 19.9mm thick.

If you're looking for a bit of variety in laptop design, you can opt for a blue or red chassis, with more sober magnesium grey and slate grey options also on offer.

The ErgoLift hinge is a really nice feature. As you lift the lid, the hinge drops the bottom of the screen down behind the keyboard base. When the laptop is fully opened, the base of the lid rests on the desk and raises the keyboard up at a slight angle. The lift is about 5mm -- not a massive amount, but enough to appeal to those who dislike a typing surface that's flat on the desk.

There is a lot of give in the keyboard, which may deter heavy-handed typists, while the keyboard action is very soft and squidgy, with no noticeable 'click'. It's not problematic to use, but in comparison to higher end keyboards it is disappointing. The touchpad is responsive and it's nice to see a Fn key option to toggle it on and off. But it's a shame there's no light to indicate that the touchpad is off.

A small number pad sits to the right of the keyboard. Its keys are about two-thirds standard width and full height, and fit neatly within the five rows of standard-height keys that form the rest of the keyboard. Whether this appeals to you will rather depend on how much you work with numbers. I found myself constantly hitting the '4' key instead of Enter, but doubtless I'd get used to the arrangement over time.

The screen sits in a 'NanoEdge' bezel measuring just 5.7mm on the short edges. The upper bezel, which houses the webcam, is slightly deeper at 8mm, while the lower edge, which has to accommodate that ErgoLift mechanism, is around 18mm. The overall effect is impressive.

The screen itself is disappointing. The Full HD (1,920 x 1,080) resolution is not the problem, and nor is the matte finish. The problem is that the anti-glare IPS screen's colours are washed out. I found reading websites and watching video underwhelming, and pushing the screen to full brightness did not help. Skin tones sometimes seemed greenish, and even the brightest colours seemed dull.

If you're after a laptop for a bit of relaxing and media viewing, or to do presentations, you might want to look elsewhere.

The speakers were also disappointing. Two grilles on the underside pump out enough sound, but the result is a tinny and lacking in bass tones. Overall, the VivoBook 15 X512 isn't a great choice of laptop for media fans.

Whenever the laptop did any kind of work the fan kicked in. It's not particularly noisy and didn't disrupt my work in an otherwise quiet office, but it's worrying that even opening a single video in YouTube gave the fan a reason to do some work. The underside was slightly warm unless the system was idling.

There's an interesting mix of connections. The right edge has a single USB 3.0 port, a USB-C port, a full-size HDMI connector, a 3.5mm headset jack and a MicroSD card slot. On the left edge there are two USB 2.0 ports.

Why are we are seeing USB 2.0 here? Surely USB 3.1 should be the lowest common denominator by now. Also, the USB-C port has no Thunderbolt support. MicroSD support is welcome though.

Battery life from the 2-cell, 37Wh battery is reasonable. I found that a general workload including writing into an online app, streaming some music, and a bit of web browsing, with the screen brightness set at around 75 percent, depleted around 25 percent of a full battery in two hours. On that basis, a full battery ought to last the best part of a working day.

Several things lift the Asus VivoBook 15 X512 out of the ordinary. Its separate narrow-format number pad will be a plus if you do a lot of spreadsheet work, and the clever ErgoLift system pushes the keyboard up at a comfortable typing angle. Battery life might get you through a day's work on a full charge, and the slim bezels are welcome.

There are disappointments elsewhere, though. My review unit's screen lacked vibrancy, the keyboard had a spongy feel, and the USB 2.0 ports should be replaced with USB 3.0.

Acer launches two new Chromebooks for the enterprise starting at $499