Microsoft's dual-screen Surface Duo began arriving in customers' hands last Thursday, the same day that the company lifted its embargo and allowed members of the tech press who had received advance shipments to post their reviews. That resulted in a flood of coverage worthy of a category-defining device that had been eagerly awaited since its announcement nearly a year earlier.

That blizzard of coverage was almost overwhelming, encompassing tens of thousands of words, hundreds of pictures, and enough video to fill a YouTube channel. 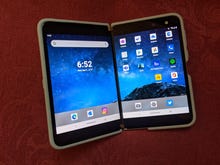 Why I'm still confused about Microsoft's dual-screen device I've been using Microsoft's Surface Duo for the last two weeks as a phone and mobile productivity tablet.

The reviews covered a lot of ground, but most reached similar conclusions. The hardware is gorgeous, the software still needs work, and performance is adequate but done in by components that need an upgrade.

The camera came in for the most criticism, and rightly so, especially given the $1400+ price tag on this unusual device, and most reviewers concluded that this is an exciting device that isn't quite ready for primetime. But they all agreed that a Google-Microsoft partnership is something worth paying close attention to.

This isn't just another phone, and the reviews offer a wide range of fascinating perspectives on why the Surface Duo is an interesting experiment and how it might improve over time. For those who want to know more, I've summarized some of the most interesting reviews here (with links), so that you can make up your own mind.

Our own Mary Jo Foley did her trademark "non-reviewer review" of the Surface Duo, emphasizing the daily experience of someone who mostly uses computing devices for writing. She was pleasantly surprised by the "premium and drool-worthy" Duo hardware and the battery life, which "actually lives up to Microsoft's 'all day' promises."

Unlike most fellow reviewers, she found the Surface Duo's camera "OK ... not amazing, but ... picture quality was passable and better than I had feared."

The real negative of this device is the "perplexing" navigation. Bottom line: "Does the Duo make me more productive than a regular mobile phone because it has two separate screens side-by-side, as Microsoft contends? My answer after two weeks is no. The non-intuitive gestures and constant guessing how apps will open and work slowed me down."

Over at The Verge, Dieter Bohn says the Surface Duo incorporates "all the right ideas," but is "spoiled by buggy software and a bad camera." Actually, not just bad: "The Surface Duo's camera is trash. … I would berate this camera on a $300 device. The Surface Duo costs $1,400. Microsoft should have just called this a webcam. It would have set expectations appropriately. Plus, it's a great webcam!"

Ultimately, Bohn says he can't recommend the Surface Duo in its current incarnation, at its current price. "But," he adds, "there are more than a few glimmers of vision and potential in the Surface Duo. Microsoft has the clearest, strongest vision for a new direction in mobile computing that I've seen this year, but picking a direction and getting to the destination are still two different things."

Joanna Stern, who is one of the most incisive reviewers in the business, notes the potential of the Surface Duo: "when it was working, the Duo felt like the first real innovation in smartphone design I've seen in years. Microsoft's re-entry to mobile cellular devices actually reminded me a lot of the original Surface: a new flexible design that can unlock more productivity."

After a clever recitation of the many issues with the pre-release device, her conclusion does not mince words: "Microsoft's new $1,400 book-like phone-tablet thingy is not ready for me and not ready for you. ... I'm hungry for the real power and productivity promised by this future-feeling gadget. It just has to actually work."

Don't miss the accompanying video, in which Pop-Tarts play a starring role.

Surface Duo review: A dual-screen phone of tomorrow ... that's not quite ready today

As usual, Daniel Rubino has done a thorough, well-organized review (with video) aimed squarely at readers (and viewers) who are already familiar with (and comfortable in) the Windows landscape.

Rubino dings the Duo for performance: "[N]o one will accuse Surface Duo of being fast. Instead, it is acceptable, and some would accuse me of being too generous there." He speculates that the "so-so" 6 GB of Ram is at least partially to blame, and an odd design decision when competing devices like Samsung's Note 20 Ultra are shipping with 12 GB.

"Those who know Android, love Microsoft 365 and Office, and continuously consume information would benefit most from Surface Duo," he concludes. But even then, "Maybe wait a few months to see how the software improves."

Microsoft's Surface Duo Is a Perfect Blend of Phone and Tablet

Owen Williams is the outlier in this batch of reviews, with an unabashedly enthusiastic review that starts with the premise that the Duo is "more a foldable tablet than a smartphone [for] a very specific slice of people who like Surface devices (like me) and care about getting more work done on the go with a single device."

The experience of using two screens, he argues, is "transformative... When I first started using the Surface Duo, I was skeptical about how much value the dual screen would add: I hadn't ever wished that my phone had more screens. But not only has the Duo convinced me that the extra space is worth it, it's totally changed the way I think about how I use my phone."

It's not all positive, of course. The camera is "good for video calling" but "mediocre ... compared to a Pixel or iPhone." Overall, though, this is the one that the Duo's designers will turn to when they need cheering up.

Android Central's headline says it all. It's a well-thought-out review from Daniel Bader, who made a good-faith effort to embrace the hardware and Microsoft-centric software despite being all in on Google services.

Conclusion: "The Surface Duo should not be available to purchase right now. Its software is still far too buggy to ask people to spend $1,400 for the privilege of owning Microsoft's smallest Surface yet."

Microsoft Surface Duo review: Is this the new normal?

Like so many of the reviews I looked at, this one from Mashable's Joseph Volpe underwent a title transformation after its initial publication. The original title was "Is this the future of smartphones?"

And like all headlines in the form of a question, both titles eventually succumb to Betteridge's Law of Headlines: "Any headline that ends in a question mark can be answered by the word no."

The in-depth review covers much of the same ground as the rest of the examples listed here, but the conclusion is considerably more optimistic: "I like the Duo. Yes, despite all those bugs and that glaring lack of a front-facing notification panel, it's got the makings of something great. ... It's just that $1,400 is a lot to ask for that convenience, especially when it isn't full service."

Harry McCracken, who's been in this business long enough to have seen plenty of overhyped devices, takes an appropriately skeptical look at the Surface Duo. He found it "quirky in the extreme, overcome by a combination of outright bugs and usability issues that Microsoft hasn't quite resolved."

After a detailed recitation of some of those issues, McCracken delivers a wait-and-see verdict: "The company stresses that the Duo's software is a work in progress, and says that it plans to push out monthly software updates. The chances seem decent that it will work much better after an update or two. But even if I were smitten with the idea that this device represents, I would wait and see rather than plunking down my money right now."

(And a historical footnote: One of my favorite McCracken articles of all time is this 2012, well-after-the-fact look at another device that was ahead of its time: "Newton, Reconsidered.")

Engadget's Cherlynn Low gives the Surface Duo what Ivy Leaguers might call a "gentleman's C," a rating of 71 on its 0-100 scale, and a note that the early results of Google and Microsoft's collaboration is promising:

"The Surface Duo is decent as a phone, quite bad as a tablet, and somewhat functional as everything in between. That is, when the software works as promised. But bugs and app incompatibility plague this $1,399 device, which will need monthly updates from Microsoft to fix its numerous issues."

CNET's Scott Stein opened his review by noting that this device "seemed promising ... like the perfect little device for this new work-from-home world." And then things fell apart, in four stages: "Stage 1: What a pretty design. Stage 2: Whoa, why is nothing working smoothly? Stage 3: How do you use this, exactly? Stage 4: I miss my old comfy phone."

Like so many of his peers, Stein concluded that the Surface Duo needs time: "I love the idea of experimentation, but I don't like using experiments that don't feel good. And right now, I don't see who the Duo is for. But in a year, it might well be a better solution."

Sam Rutherford led his review with a note about the Duo being "one of the most divisive phones in recent memory" and a pointed rebuke at the "vitriol, incredulity, and straight-up hate" the device has drawn. Which gives you an idea of where this one will end up. "[A]t some points the $1,400 Surface Duo feels very experimental. But that's kind of to be expected when a device is trying to start a revolution."

It's not surprising, then, that the conclusion is positive: "[E]ven with its flaws, the Surface Duo is already an incredibly powerful business phone. ... This is Microsoft trying to replicate what it did when it created a new category of devices with the original Surface. It's not perfect, but the revolution is here."