Written by Forrester Research and 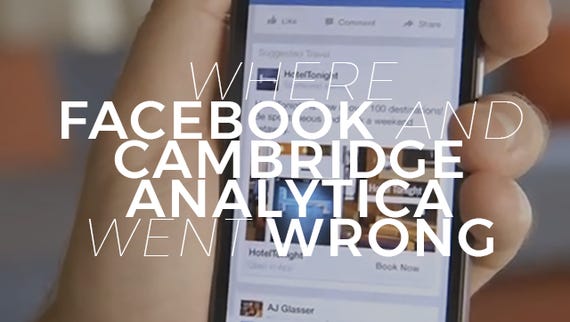 Video: A violation of trust: Where Facebook and Cambridge Analytica went wrong

When salacious tales of Cambridge Analytica's activities emerged in 2018, we thought the company was finished. The many on-air discussions of illegal activities, law enforcement warrants, legal action threats from partners, and questionable ethics had appeared to doom them. We then saw multiple suspensions and resignations, and on May 2, 2018 Cambridge Analytica announced it would file for bankruptcy. For a brief moment, it seemed like the world was a better place: The "good team" had won, the evil doers were vanquished, and the world was moving on.

Of course, this wasn't actually the case. Instead...

The victory celebration was short-lived. On the heels of the bankruptcy news, we learned that Emerdata -- a company founded in 2017 -- was using the same address as Cambridge Analytica's parent company SCL. So, in continuing proof that we might be living in the darkest timeline possible, Emerdata is listing the chairman of Frontier Services Group as one of its directors, and his lineage dates back to Blackwater. Is this a nod to the rebranding efforts of the infamous private security firm? Does Emerdata want you to forget about its evil past? Most definitely yes. Not only is Cambridge Analytica rising from the dead (like a zombie), it's rising with enhanced predator capabilities (like a vampire). A vampire with legal paperwork and tax documentation prepared and filed, that is.

WE'RE WITNESSING THE DANGER OF THE SCARY DATA LIFECYCLE

When you collect data, and then build platforms and business models that monetize that data, you risk losing control of the data. Companies might use that information for good, perhaps making medical advances, and other companies might use it for evil. To make this as clear as possible -- no matter how much evil Cambridge Analytica did with the data it obtained from Facebook, Facebook is in way more trouble. We outline the dangers of the scary data lifecycle in our Future of Cybersecurity and Privacy research.

Read also: The CIAM implications of the Facebook/Cambridge Analytica scandal

If you're actively monetizing information, you could be the next Facebook. Your digital supply chain is now loaded with ethical and moral dilemmas you will need to confront sooner rather than later. Cambridge Analytica is simply rebranding and emerging as something "different." In fact, the asymmetry between the firms is striking. Facebook can't simply rebrand or change in a few days. Yet the company that helped to make them public enemy No. 1 in 2018 has pulled a disappearing act while eyes were focused in the other direction. Is it worth becoming the next data distributor only to be crushed by your third-party's ethics?

WEAPONIZING DATA COMBINED WITH PARAMILITARY EXPERTISE SHOULD CONCERN... EVERYONE

Cambridge Analytica -- Emerdata, SCL Group -- has already proven its willingness to engage in destabilizing behavior aimed at governments. It turns out that weaponizing data is an effective way to influence elections on a global basis. (Are you scared yet?) Now in a government-esque move, Emerdata has coupled its background of destabilizing data analytics with para-military expertise. Regardless of political affiliation or viewpoint, this should concern governments and enterprises as one of the more terrifying geopolitical threats.

WEAPONIZED DATA WILL TARGET YOUR BRAND

While the group of clients Cambridge Analytica represents featured politicians and political movements, enterprises should worry about what will happen when influence campaigns take aim at their brand and reputation. It will be more than a PR and advertising battle. Disinformation, misinformation, and feedback loops designed to elicit the most emotional responses possible will seek to degrade -- or distort -= the customer experiences and customer engagements that your business has created.

Read also: How to tell if Cambridge Analytica accessed your Facebook data

For more on that topic, attend my session titled: "Defending Your Brand In The Post Truth Era" at Digital Transformation 2018 on May 8, 2018 in Chicago.

Join Discussion for: Tales of the scary data lifecycle: Cambridge...