Full Bio
Posted in Between the Lines on June 11, 2021 | Topic: Quantum Computing 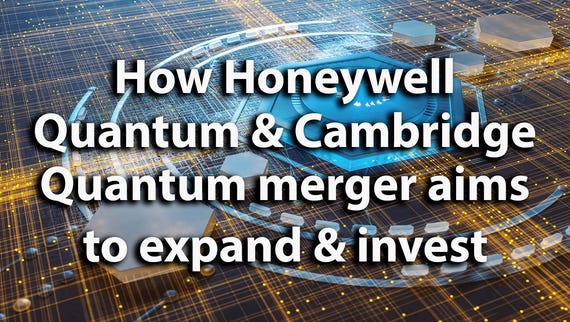 Honeywell Quantum Solutions and Cambridge Quantum made a big splash in quantum computing with plans to merge and form an independent company that combines Honeywell's trapped Ion hardware with Cambridge Quantum's software platforms.

The yet-to-named company will get up to $300 million in investment from Honeywell and be able to court outside investors. When the deal is complete there will be a few quantum companies for investors given IonQ will soon be public via a special purpose acquisition corporation (SPAC) deal. Honeywell has made a big push into quantum computing over the last few years as it looks to expand industrial usage of the technology.

Value of the pure play. Uttley said Honeywell was receiving inbound requests about investing in the quantum business, but outside investment is challenging inside of an industrial conglomerate. By creating an independent company via the merger of Honeywell Quantum Solutions and Cambridge Quantum, there's now an avenue for more investment. "This new company provides and investment vehicle for those organizations thinking about quantum," said Uttley, who added the new company can mark an inflection point within quantum computing. Investors may include venture capitalists, private equity as well as strategic partners.

"It is the idea of saying, 'if I had the ability to design the hardware and the operating system and the applications, all together could I make that experience be an absolutely seamless pristine one for our customers?' We believe the answer is yes," said Uttley. Honeywell will be among the largest customers for the new company.

Competition. While there are many players entering quantum computing Uttley said the goal of the new company revolves more around collaboration with the ecosystem. More collaboration will be needed to grow the quantum market via solving real business challenges. "We're really early in this technology," said Uttley.

Talent. Another rationale behind the Honeywell and Cambridge Quantum combination is talent. The combined company will have about 350 employees when the deal closes but will need to expand quickly. "The scarcest resource in quantum is the human resource. This is an amazing opportunity to bring this incredible talent pool together," said Uttley. Cloud computing will also enable more developers to get involved. Expansion in the early days of the company will revolve around people and infrastructure.

The long game. Uttley said quantum computing is still in its infancy and the Honeywell Quantum and Cambridge Quantum combination will provide the resources to help develop the market. "This is a company, and this is a technology that's going to play out over decades. It's not about next quarter and it's not about next year, but about creating a space that to a large extent doesn't even exist. We have to go and put in the resources to go do that," he said.