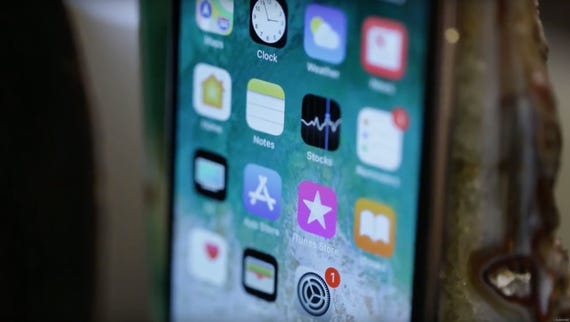 Congratulations Apple, you've distracted press and pundits alike from wondering why you don't have a successor to the iPhone.

iPhone X review: Camera tricks, swiping up -- and that OLED

Apple is an oddity. It's a company that's doing remarkably well, but over the past ten years it hasn't had a product that comes close to replacing the iPhone as its cash cow, which means that it has to find ever more inventive ways to make a smartphone feel new, different, or at least a little exciting.

Apple has convinced us that a better screen, a better camera, and a different way to unlock the device packaged into a different form factor is new.

And don't get me wrong, the iPhone X is both bold and clever, but that boldness and cleverness is mostly down to marketing. I mean come on, Apple is pretty unique in being able to push gimmicky features such as Animojis or a new ringtone and not look like it's scraping the bottom of the barrel for ideas.

And the pent-up demand for the iPhone X proves my point. I've heard from people who haven't upgraded for years who are interested in the iPhone X for the simple reason that it's a little different and a little more exciting.

And they're willing to pay $1,000+ for something that's a little different and a little better. And let's be honest, that $1,000+ price tag is the most revolutionary thing about the iPhone (and you Android fans can stop sniggering, because that'll be the price tag slapped onto premium Android handsets by mid-2018).

The Apple products you shouldn't buy (and... SEE FULL GALLERY

But the deed is now done. Apple has done what it did with the iPad line and added a new tier to the lineup. And while I'm sure that Apple will sell millions of iPhone X handsets -- although the silence from Apple over pre-order boasts feels odd if sales were strong -- it still doesn't take away from the problems facing Apple.

Now, it's likely that the iPhone X and iPhone 8 will explode hardware growth, but this is far from a long-term solution, because:

The fact that Apple hasn't launched a groundbreaking new product since the company has been under the leadership of current CEO Tim Cook hasn't escaped me. While Cook has been a good caretaker at Apple, and done an admirable job of maximizing revenue from existing products (especially the iPhone, but also the iPad and Mac), it's still not clear whether he has what it takes to break new ground. The Apple Watch remains little more than an accessory (although a rather nice one), and beyond that Apple it reported to have tinkered with, before abandoning, the idea of getting into transportation.

I still hold hope that Apple has some exciting new class of products in the pipeline somewhere, stuff that we didn't know we needed until the moment we saw it in Tim Cook's hands, but that hope is fading fast.

It sure feels like Apple has become a company pretty much focused on making hay while the iPhone sales shine.

Join Discussion for: The iPhone X doesn't save Apple from desperately...