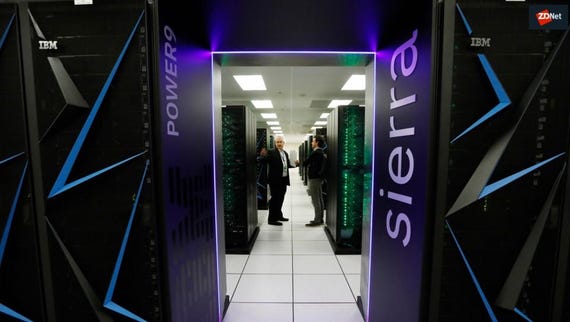 Yes, there's a lot of talk now about how quantum computers can do jobs in 200 seconds that would take the world's fastest supercomputers 10,000 years. That's nice. But the simple truth is, for almost all jobs, supercomputers are faster than anything else on the planet. And, in the latest Top 500 supercomputer ratings, the average speed of these Linux-powered racers is now an astonishing 1.14 petaflops.

The fastest of the fast machines haven't changed since the June 2019 Top 500 supercomputer list. Leading the way is Oak Ridge National Laboratory's Summit system, which holds top honors with an HPL result of 148.6 petaflops. This is an IBM-built supercomputer using Power9 CPUs and NVIDIA Tesla V100 GPUs.

In a rather distant second place is another IBM machine: Lawrence Livermore National Laboratory's Sierra system. It uses the same chips, but it "only" hit a speed of 94.6 petaflops.

Close behind at No. 3 is the Sunway TaihuLight supercomputer, with an HPL mark of 93.0 petaflops. TaihuLight was developed by China's National Research Center of Parallel Computer Engineering and Technology (NRCPC) and is installed at the National Supercomputing Center in Wuxi. It is powered exclusively by Sunway's SW26010 processors.

Sunway's followed by the Tianhe-2A (Milky Way-2A). This is a system developed by China's National University of Defense Technology (NUDT). It's deployed at the National Supercomputer Center in China. Powered by Intel Xeon CPUs and Matrix-2000 accelerators, it has a top speed of 61.4 petaflops.

Coming at No. 5, the Dell-built, Frontera, a Dell C6420 system is powered by Intel Xeon Platinum processors. It speeds along at  23.5 petaflops. It lives at the Texas Advanced Computing Center of the University of Texas.

The most powerful new supercomputer on the list is Rensselaer Polytechnic Institute Center for Computational Innovations (CCI)'s AiMOS. It made the list in the 25th position with 8.0 petaflops. The IBM-built system, like Summit and Sierra, is powered by Power9 CPUs and NVIDIA V100 GPUs.

China continues to develop more and faster machines. It now has almost half (227) of the world's fastest supercomputers. At the same time, the US-based system remains near its all-time low at 118. That said, American systems are, on average, significantly larger and faster. So, in terms of aggregate performance, US supercomputers still have a 37.8% share of the list. China is close behind with a 31.9% performance share. China is gaining. The June 2019 list had the US with 38.4% of the list's aggregate performance and China with 29.9%

While at the top, the fastest of the fast competition has remained the same; it's a different story with the Green500 list. This is a list of the most energy-efficiency supercomputers that have transformed. The new No. 1 is the A64FX prototype supercomputer, which delivered 16.9 gigaflops/watt. Just slightly less green at No. 2 is NA-1, a Zettascaler machine that uses PEZY Computing's PEZY-SC2 processors and delivers 16.3 gigaflops/watt.

The third-ranked Green500 system is the aforementioned AiMOS system. Prove that you can be fast and green. It's followed by two more Power9/NVIDIA V100 IBM systems.

While fast chips are vital for the fastest computers, it's not all about the processors. For the CPUs to deliver high performance, they need data as fast they can get it. While Ethernet is used in 52% (258) of the Top 500 systems, lately, that data is being delivered more and more often by Mellanox Technologies' HDR InfiniBand. One-hundred and forty-one of the Top 500 supercomputers now use HDR InfiniBand including two of the top five.

From a performance perspective, it's clear why this is so. Despite the difference in the number of deployed systems, InfiniBand-based machines represent 40% of the Top 500's aggregate performance, and Ethernet-based machines have 29%.

Regardless of the hardware, all 500 of the world's fastest supercomputers have one thing in common: They all run Linux.