The airline insists that the cameras have not been in active use.
Written by Charlie Osborne, Contributor on April 29, 2019 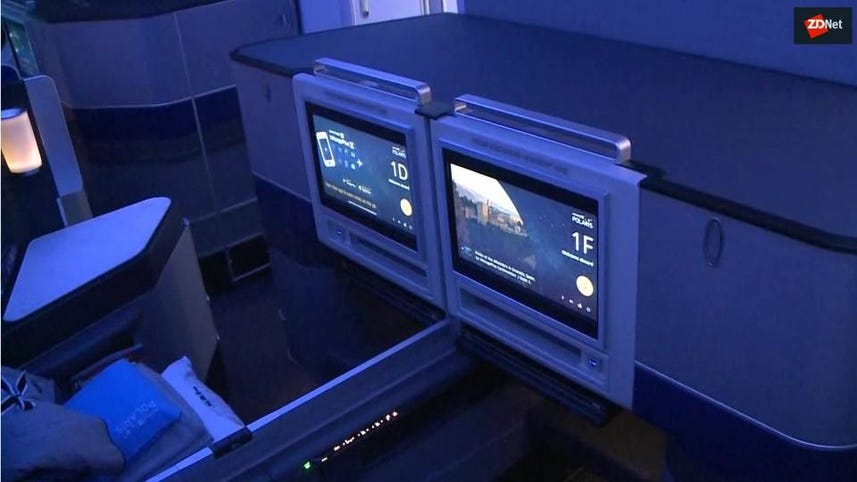 United Airlines has covered every camera embedded in entertainment systems embedded within the back of plane seats in response to passenger privacy concerns.

The cameras were included in off-the-shelf screen and entertainment products the airline purchased.

United Airlines was quick to respond to requests concerning the cameras, unsurprising given the airline's recent PR disasters relating to the violent removal of a passenger by security and the death of a puppy that staff insisted be stowed in an overhead bin.

Speaking to Buzzfeed News, the carrier said that all cameras -- found in the back of premium seats -- will now be covered, but their purpose was never to monitor passengers. Rather, the cameras were included for possible future applications such as video conferencing.

See also: Hackers can exploit this bug in surveillance cameras to tamper with footage

"As with many other airlines, some of our premium seats have in-flight entertainment systems that came with cameras installed by the manufacturer," a United Airlines spokesperson said. "None of these cameras were ever activated and we had no plans to use them in the future, however, we took the additional step to cover the cameras."

Stickers have been spotted which now cover these cameras and the airline says that all new premium seats will also receive the same treatment.

Singapore Airlines, too, has recently faced criticism for camera usage. In February, passenger Vitaly Kamluk posted an image on Twitter which revealed a small camera under the screen of a Singapore Airlines seat pointing to fliers.

"These cameras on our newer IFE systems were provided by the original equipment manufacturers," the airline said, responding directly to the tweet. "We have no plans to enable or develop any features using the cameras."

At a time when facial recognition technology, AI bias, cameras, and surveillance continue to intrude on our privacy, it is also airports which are coming under fire for adopting such technology without making the situation clear to the public.

Earlier this month, a passenger with JetBlue took to Twitter after finding that facial recognition technology appeared to have replaced boarding passes with the airline. A public Twitter discussion revealed that the technology tapped into biometric information from the Customs and Border Protection database.