New proposals submitted to the World Conference on International Telecommunications (WCIT-12) aim to redefine the Internet as a system of government-controlled, state-supervised networks, according to a leaked document.

According to ITU's Twitter feed, TechWeek Europe and The National, the proposal has now been withdrawn. Additionally, the Egyptian delegation has communicated to WCITleaks via Twitter that, despite its name on the document, Egypt claims it "never supported the document."

Both Russia and China have been criticized in the past for various actions over their legislative approaches to their citizens' Internet access. Russia recently enacted a 'blacklist' law that sparked parliamentary scrutiny over the country's plans to censor the Russian Web, while China has for years impeded citizens' access to a free and open Web thanks to the state-run so-called 'Great Firewall'. 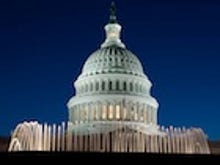 The U.S. House of Representatives has unanimously approved a resolution to oppose U.N. intent to govern and regulate the Internet at its WCIT-12 conference in Dubai, currently underway. [UPDATED]

The leaked proposal specifically defines the Internet as an: "international conglomeration of interconnected telecommunication networks," and that "Internet governance shall be effected through the development and application by governments," with member states having "the sovereign right to establish and implement public policy, including international policy, on matters of Internet governance."

The document also reflects one country's relentless push to redefine the Internet -- most recently seen in Russia's original proposals for WCIT-12 [PDF].

In June 2011, Vladimir Putin met with ITU's Secretary-General, Dr. Hamadoun Toure, where the then-Russian Prime Minister reminded the Toure that Russia co-founded the ITU. Putin then made headlines after stating that Russia intends to actively participate in, "establishing international control over the Internet using the monitoring and supervisory capabilities of the International Telecommunication Union (ITU)."

With the secretive nature of WCIT-12's proposal system, there is a growing sense that certain countries are prepared to move quickly in hopes that drastic proposals will slip through unnoticed.

In late November, the Arab States made a last-minute play to have the ITU become a national registry in the standards-setting summit the ITU facilitated just before WCIT-12 began only a week ago.

According to Dot Next, attendees at the World Telecommunication Standardization Assembly (WTSA) were "surprised" with an aggressive last-minute proposal by the Arab States that the ITU become a provider of IP addresses, citing "historical imbalances" relating to the allocation of traditional IPv4 addresses.

The proposal was halted when the U.S. threatened that it would refuse to accept the decision if it were passed. In a softening move, the ITU then decided it would, "conduct a feasibility study on the necessary action that would enable ITU-T to become a registry of IPv6 addresses" for the ITU Council to consider in 2013.

It's outrageous to think that any country would propose "state surveillance," or "the sovereign right to force Internet companies to hand over private information." But, this seems to be just what this document is proposing:

It cannot be understated the damage such a proposal could do to the free and open Internet, online privacy and anonymity, with access to the Internet at risk from an array of oppressive governments.