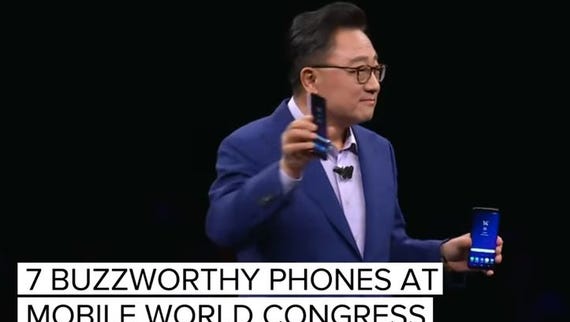 Mobile World Congress 2019 is in full swing, and the star of the show has undoubtedly been the early "transformer" folding devices that have been previewed by Samsung and Huawei to the resounding oohs and aahs of attending technology press.

Oohs and aahs that changed to gasps of astonishment when told just how expensive they will be, in the range of $2000 or more when the devices finally ship next year.

The very first examples are going to run the Android 9.x (Pie) operating system. I have no doubt these products will eventually ship, but at best they are going to be curiosities, and rare status symbols for those folks who want to broadcast their ostentatious displays of wealth when they use them in public.

The "One Device" has always been elusive -- that mythical and seemingly impossible to achieve digital convergence form factor that would allow the end-user to carry a single piece of equipment that would serve virtually all of their computing needs. An all-in-one handheld, tablet and mobile PC that would do everything.

It sounds like science fiction, even fantasy. And yet, the raw technology to create these types of devices is soon to be within our grasp. Advancements in display tech, mobile SoCs/processors and wireless such as Wi-Fi 6 and 5G will soon enable not just "transformer" types of devices like this, but also more sophisticated smartwatches/wrist computers and augmented reality (AR) wearable systems like the new ARM-based Microsoft Hololens 2, which was also recently announced.

And while these products are initially going to be very expensive, economies of scale over the next several years will eventually allow the prices to drop to more palatable consumer levels, just like every other emerging technology we have seen previously.

Also: Best of MWC 2019: Cool tech you can buy or pre-order this year

The hardware, at a price point that consumers and businesses are willing to pay for, however, is not the only aspect of what comprises a successful computing device platform. It's also the operating system and the applications that run on it.

While the first transformer devices like the Samsung Galaxy Fold and the Huawei Mate X will run Google's Android, the reality is that the mass-adopted products that we will see in the next several years will almost certainly not.

Android is not a good operating system for a number of reasons to run on a mass-market convergence device.

For starters, we already know that Google is actively working to replace it with Fuchsia, its next generation mobile operating system that will almost certainly displace Android and also eventually Chrome OS. Google could use Chrome OS as a stopgap measure, because it has a better browser platform with full desktop Chrome running on Linux, and also has an Android executable run-time environment, so it can run the entire suite of Google Play applications.

If the convergence device is going to fold out to be a small or medium-sized tablet, and will have a dockable capability to be used as a desktop replacement with a monitor, mouse and keyboard, Chrome OS is a much better choice than Android is because it already has a proven use case being deployed as a desktop OS replacement.

Also: How to enable Night Light in Chrome OS TechRepublic

But the reality is that even when running under Chrome OS's Android runtime, Google Play apps have never been completely optimized for tablets or even desktop use. The balance of Android applications are really written for smartphones. And while Google has created software development frameworks for making Android applications more suitable for tablets and desktops, the balance of Android developers have not been actively porting their apps to be more tablet and desktop-worthy.

So for this mythical future convergence device, Android is probably a non-starter. We don't know really what Google plans to do with Fuchsia going forward, so I don't want to speculate too much on what it can do or what sort of apps will be able to run on it.

I have no idea if Apple is developing a similar foldable convergence device, but iOS seems to be already tailor-made to run on such a thing.

For starters, Apple already has plenty of apps that run on iPhone and also iPad, and has the software development frameworks to allow for "universal" app binaries that run on both platforms.

While not anywhere near as plagued as Android is, since iPad has plenty of native apps, not every iOS app in the app store uses that universal binary methodology and not every iPhone app has a separate iPad equivalent. This is painfully evident with popular iPhone apps like Instagram, which has to run in iPhone display emulation on the iPad and not at full resolution.

Apple would absolutely need to make some changes to iOS to allow for modality switching between a phone mode and a tablet mode, and changes to its SDK so that all apps in the App Store would eventually be "universal" in nature.

Still, there are early indications that Apple may be looking to merge development of not just iPhone and iPad apps, but also Mac apps with the release of an updated SDK at the next WWDC.

Presumably, this would mean not just a universal app development environment, but potentially the future replacement for iOS and Mac OS X with a convergence operating system as well, which would allow for iPad/Mac touchscreen hybrids similar to Microsoft's Surface Pro 6 and the Surface Book 2.

And what of Microsoft? Well, the company is cutting its chops with the AR version of Windows 10 in the Hololens, and has already optimized Windows 10 for the ARM processor on their Surface laptop/tablet hybrid. And while Windows Mobile for smartphones is dead as a doornail, this does not preclude the possibility that aspects of its technology could be revived in the future particularly if Redmond were to partner with Samsung, Huawei or another large scale manufacturer on a foldable convergence device.

Also: Today's technology trends that will still matter a decade from now

It's going to be an exciting couple of years for introducing new form factors with the advent of flexible display tech and other enabling mobile technologies. But it is not safe to assume that Android or any of Google's platforms is going to be the dominant player in this space as it is today.

Who and what sort of systems do you think will dominate the mobile platforms of the future? Talk Back and Let Me Know.

Join Discussion for: Why the One Device will never be a folding...