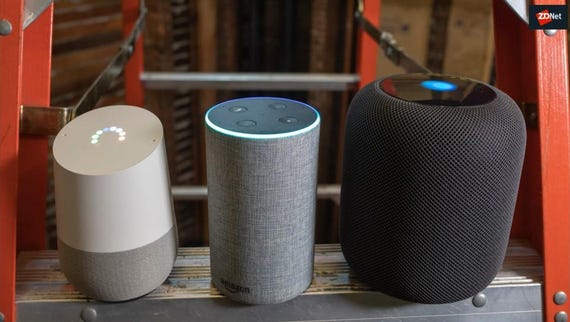 Hundreds of smart devices clamour for our attention these days, including voice-controlled speakers, lights and other labour-saving devices. Yet the smart home remains more of a dream than a reality.

That's partly because these smart devices are rarely compatible with each other, leaving both manufacturers and consumers struggling with a confusing mish-mash of competing technologies.

For example, my to-do list for this week includes writing reviews of some smart lights designed for use with Apple's Siri and HomeKit, a security camera that works with Amazon's Alexa, and a robot vacuum cleaner that just does its own thing. Each device requires a different set of apps and mobile devices for me to control them, which simply isn't practical for home users who tend to prefer a particular platform -- be it Alexa, Siri, or Google Assistant, which is the third major voice technology competing for our attention. It's also difficult and expensive for manufacturers to support multiple competing technologies when developing their smart devices.

That could change, though, if a new industry initiative takes off. Called Project Connected Home over IP, or CHIP, the aim is to "develop and promote the adoption of a new, royalty-free connectivity standard to increase compatibility among smart home products".

In effect, this means that manufacturers will be able to build smart devices that work with all three of the main voice assistants from Amazon, Apple and Google. The CHIP website confirms this aim, stating that "customers can be confident that their device…will work in their home and they will be able to set-up and control it with their preferred system".

This, of course, means that Project CHIP has achieved the unlikely feat of bringing together Amazon, Apple and Google in a rare collaboration. That, perhaps, is partly due to the influence of the fourth key member of this group -- the Zigbee Alliance. Zigbee may be less well known than Alexa, Siri and Google, but the 2.4GHz wireless technology arose from a previous attempt to create compatibility standards for the Internet of Things (IoT). Zigbee has attracted support from several manufacturers of smart devices, including Samsung with its range of SmartThings devices, Signify (owner of the popular Philips Hue smart lights), and even the flat-pack specialists at Ikea.

The CHIP project, therefore, is an attempt to bring the three main players on-board in order to create a consumer-friendly compatibility standard that has the support of all the big tech giants.

"The idea behind Project CHIP is something we've been working on for a long time," Tobin Richardson, CEO of Zigbee Alliance, told ZDNet. "As the IoT has unfolded it's been clear for a while now that we need stronger unity between brands and ecosystems to take this tech evolution to the next level."

The smart home market is currently a three-way battle between Amazon, Apple and Google, with Amazon enjoying an advantage thanks to the success of its Echo range of smart speakers and their Alexa voice assistant. Amazon has done a good job of encouraging manufacturers of smart devices to support the technology and Alexa can now be used to control an impressive range of smart devices in your home.

Google has been attempting to emulate the success of the Amazon Echo with its own range of Google Home speakers, which includes the Google Assistant voice technology. And, bringing up the rear is Apple, with Siri and its HomeKit software. Ironically, Siri and HomeKit have been around longer than their rivals from Amazon and Google, but Apple's delay in releasing its HomePod smart speaker -- and the typically high price of the HomePod -- has meant that Apple has failed to exploit what could have been a game-changing first-mover advantage.

Alexa vs Siri vs Google

That competition between Alexa, Siri and Google Assistant means that any manufacturer currently attempting to develop smart devices for the home has to struggle with three competing technologies -- or simply opt for one of them in the hope that it will win out over its rivals.

Industry analysts at market research provider Euromonitor International agree that lack of compatibility is a barrier to the development of smart devices and the Internet Of Things.

"Currently, the key barrier towards mass adoption of smart home products is the lack of interoperability between different devices and brands," says Euromonitor's home and tech consultant Hiromi Yamaguchi. "If the working group succeeds in bringing all the different companies together, then customers can be confident that their devices will work seamlessly in their home."

That's very much the aim of Project CHIP, confirms Zigbee Alliance's Richardson: "participating companies are working alongside each other to unite existing technologies". This doesn't mean that the familiar voices of Alexa, Siri and the Google Assistant will disappear and be replaced by a new voice assistant that rules over all your smart home devices. Instead, the new CHIP standard will allow future smart devices to work with all of the main voice assistants. That will make it easier and less expensive for manufacturers to develop new devices, and also allow consumers to buy new smart devices for their home without having to worry whether that device will work with the voice assistant they are already using -- Siri, Alexa or Google Assistant.

Consumers will welcome greater compatibility between their smart devices, but many people are also becoming increasingly concerned about the privacy issues raised by the presence of smart speakers that can listen to everything they say in their home. Project CHIP aims to address these concerns as well, stating that the new compatibility standard will also feature "security as a fundamental design tenet". That, however, is as far as the public statement goes: no specific details are available on the security features that CHIP will provide in the future.

New industry standards can often take years to reach the market place, but Project CHIP hopes to see results by the end of 2020. Richardson claims that bringing together Amazon, Apple and Google, and using their existing technologies -- rather than starting from scratch -- "will help bring forward the standard swiftly". And while there may be "aggressive conversations" between the rival tech titans, he believes that "the industry will be better because of them. This is a turning point -- so stay tuned".

Join Discussion for: With Amazon, Apple and Google onboard, this...