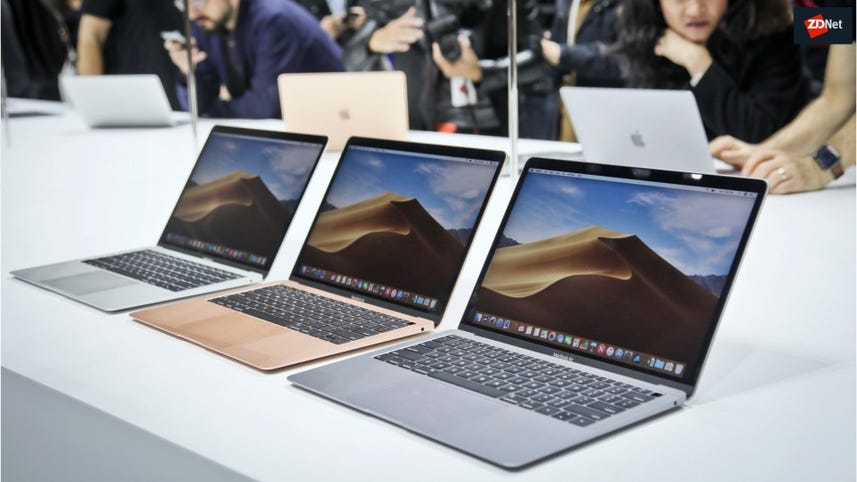 Apple's renewed focus on the Mac side of its business continues this month with a long-awaited make-over for what the company claims is "the most beloved notebook ever".

There's some truth to that claim, as the slimline MacBook Air has continued to sell well in recent years despite the fact that -- aside from the occasional modest speed-bump -- its basic design has remained unchanged since its debut in 2008. But a decade of neglect has seen this former flagship laptop relegated to Apple's 'entry-level' offering for students and home users.

That leaves the 2018 edition of the MacBook Air with a lot of lost ground to make up. But, as with the similarly revitalized Mac Mini, it does seem as though Apple is listening to this product's many admirers once again.

The design of the original MacBook Air was both innovative and highly influential, prompting gasps from the audience when the late Steve Jobs slipped the 17mm thick laptop out of a manila envelope for the very first time. In fact, it could be argued that the MacBook Air defined the 'ultrabook' category of ultra-portable laptops even before Intel's marketing department got around to coining that term. So Apple has made a conscious decision with this 2018 update to retain key elements of that design, including the distinctive -- and often copied -- 'teardrop' profile that gently tapers from back to front.

But while a casual first look focuses on the familiarity of the design, it doesn't take long to spot the newer 2018 design details. Inevitably, the new MacBook Air is available in three different colours; gold, silver, and the 'space grey' that in Apple's current design language says "this is for serious-minded pro users".

The new display certainly looks bolder, brighter and sharper than my own MacBook Air from 2015, and its support for the sRGB colour space will be perfectly adequate for routine web browsing, running Microsoft Office, or basic photo- and video-editing for presentations work. Apple does point out that -- unlike the more expensive MacBook Pro range -- the display doesn't support the DCI-P3 colour standard used in the professional video and broadcast industries, but that's not really a requirement for Apple's intended audience of business users and (presumably well-heeled) students.

Another important change is the removal of the chunky metal border that used to run around the screen, and which did make the MacBook Air look increasingly dated in recent years. The new edge-to-edge glass panel looks a lot smarter, and has also allowed Apple to reduce the size of the laptop quite dramatically. The previous version of the MacBook Air -- which remains on sale at £790.83 (ex. VAT; £949 inc. VAT, or $999) -- measured 17mm thick by 325mm wide by 227mm deep, while the new MacBook Air with Retina Display shrinks to 15.6mm thick, 304mm wide and 212.4mm deep. According to Apple that represents a 17 percent reduction in the laptop's total volume, while the weight also drops from 1.35kg to 1.25kg.

Of course, there are some significant changes on the inside of the new laptop too. The 2018 MacBook Air doesn't have the context-sensitive Touch Bar found on the MacBook Pro, but it does have a Touch ID fingerprint sensor located on the top-right corner of the keyboard, along with Apple's custom T2 security chip. This controls the Touch ID sensor for locking and unlocking the laptop, using the Apple Pay payment system, and listening out for 'Hey Siri' voice commands. It also scans all software loaded during the boot process, as well as providing Apple's 'secure enclave' with AES-256 encryption for data stored on the internal solid-state drive.

The slimmer design means that the new MacBook Air abandons the traditional 'scissor' keyboard of previous models -- which I have always found satisfyingly firm and responsive when typing on my own MacBook Air -- and adopts Apple's newer 'butterfly' mechanism instead. However, Apple points out that this is now the third-generation version of the butterfly keyboard, and while the limited travel of the keys still feels a little lifeless and unresponsive, I'll admit that the keyboard panel does feel firmer than on other Apple laptops that I've tested in recent months.

The twin USB-A ports of the previous generation have been replaced with a pair of Thunderbolt 3/USB-C ports, and the only other interface available is a 3.5mm jack for headphones or speakers. Apple has also redesigned the speakers, with a 'wide stereo' option that works surprisingly well given the laptop's compact dimensions.

Needless to say, the new MacBook Air also includes a significant update to its processor and storage systems. As mentioned, there is one older model from 2017 that remains on sale: it still uses a 5th-generation Core i5 processor and has a low-res display, which does little for the competitiveness of its £949 price tag.

However, there are no processor upgrades available at all, so Apple is clearly limiting the performance of the MacBook Air in order to steer customers who need more power towards the MacBook Pro range. And, like the 13-inch version of the MacBook Pro, the MacBook Air relies on integrated graphics, with Apple now promoting third-party external GPU devices as the upgrade option for more demanding graphics and video applications.

Those Geekbench tests don't tell the whole story, either, as the integrated UHD Graphics 617 GPU manages a respectable 35.6fps when running the Cinebench R15 OpenGL test, while the T2 chip also handles video encoding when using Apple's preferred HEVC format. It's certainly not a speed-demon, but we did find that the 2018 MacBook Air felt smooth and responsive for most tasks, and it should be more than adequate for running Microsoft Office and other productivity apps on the road. It'll last all day long too, the 50.3Wh battery giving us just a couple of minutes over 10 hours when streaming full-screen video from the BBC iPlayer. My own 2015 model lasts for 11 hours, but its 1,440 by 900 display requires far less power, so 10 hours for this new model is still good going.

It may be long overdue, but the 2018 edition of the MacBook Air pulls off a good balancing act. Rather than a ground-up revamp, this new model concentrates on refining the elegant, lightweight design that made the MacBook Air so popular in the first place, while also bringing it up to date with features such as the Retina Display and T2 security chip. And while the MacBook Air certainly isn't cheap it's not far out of step with the pricing of rival Windows ultraportables. It's made out of 100 percent recycled aluminium too, so you can feel good about the environment when you show it off in your local coffee shop.

Apple MacBook Air (2018) review: The MacBook Air plays catch-up(CNET)
The MacBook Air's long overdue makeover adds welcome additions like a high-res screen and Touch ID, but it includes some unwelcome trade-offs -- including a much higher price.