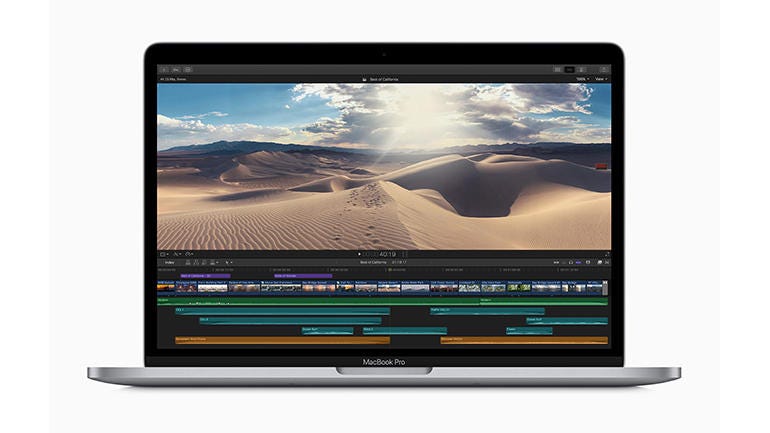 The details of this update bear close examination, as the 13-inch MacBook Pro now offers four standard configurations based on either 8th-generation or newer 10th-generation Intel Core i5 processors. There are other differences between the various models too, so it's important to compare the different configurations so that you can decide which one best meets your needs.

When Apple updates the 13-inch MacBook Pro every year, it generally keeps one configuration from the previous year available in order to provide a more affordable entry-level option (even if the term 'affordable' is something of a moveable feast where Apple is concerned). The starting price for the 2020 edition remains the same as last year, at £1,082.50 (ex. VAT; £1,299 inc. VAT) or $1,299, and that model does continue to use the same processor as its predecessor -- an 8th generation, quad-core Core i5 running at 1.4GHz, along with 8GB of RAM.

That entry-level model does get a little extra attention, though, increasing last year's meagre 128GB SSD to 256GB. And, thankfully, all the 2020 models now include Apple's new Magic Keyboard, with its improved 'scissor' mechanism that aims to provide a more comfortable and responsive feel than the widely criticised 'butterfly' keyboards of recent years (although this does bump the weight up fractionally, from 1.37kg to 1.4kg).

The new keyboard is certainly an improvement, and feels firmer and more responsive than the lifeless keyboard of earlier models. The Retina Display remains the same, with all the 2020 models sharing the same bright and colourful screen, with 2,560 by 1,600 resolution (227dpi).

This new configuration now includes a 10th generation, quad-core Core i5-1038NG7 processor running at 2.0GHz (up to 3.8GHz with TurboBoost), with integrated Iris Plus graphics, along with 16GB of RAM (running at a faster 3,733MHz) and a 512GB SSD. This model also includes four Thunderbolt 3 ports, rather than the meagre pair of ports offered by the entry-level 1.4GHz model. We didn't have the luxury of opening up our review unit, but it's been reported online that this 2.0GHz model has a new motherboard design that incorporates a second cooling fan and a more powerful set of speakers (we did ask Apple if that's correct, but have yet to receive confirmation).

Apple's announcement of the new 13-inch MacBook Pro claimed that it offers 'up to 2.8 times faster performance' -- but that's in comparison to a dual-core model from two generations ago. The performance improvement over last year's model is more modest. The 10th generation Core i5 processor in our 2020 review unit achieves single- and multi-core processor scores of 5,500 and 17,950 when running Geekbench 4, compared to last year's scores of 4,870 and 17,300.

Running the newer Geekbench 5 produced scores 1,250 and 4,480 for single- and multi-core performance, which are similar to the scores of 1,308 and 4,900 recorded by the slightly more expensive Microsoft Surface Laptop 3. However, the MacBook Pro edged ahead on graphics performance, hitting 14.8fps with the Unigine Valley test, compared to 11fps for the Surface Laptop 3, or 11.5fps for last year's MacBook Pro model. That might seem like a relatively small difference, but the Valley test suite is quite demanding, so an increase of even a few frames per second still represents a worthwhile improvement. Apple also points out that the MacBook Pro's Iris Plus graphics can support external displays of up to 6K resolution -- including, of course, Apple's own expensive Pro Display XDR.

The only minor disappointment with the 2020 13-inch MacBook Pro is that battery life drops slightly. Apple quotes 'up to 10 hours' for both the 8th generation and 10th generation processors, and last year's model with the 8th generation 1.4GHz processor did manage an impressive 9 hours 45 minutes when streaming video on the BBC iPlayer. However, this year's more powerful 10th generation model couldn't quite match that, delivering 8 hours 45 minutes of streaming video via the BBC iPlayer. Even so, that's enough to give you a full day's work with no problems, and also beats the Surface Laptop 3 by a good two hours.

The 2020 13-inch MacBook Pro is more of a 'speedbump' than a radical revamp, but Apple is clearly hoping to offer a tempting quad-core upgrade to owners of older dual-core models, as well as competing with newer rivals such as Microsoft's Surface range. Its lightweight design and battery life are still hard to beat, and it's good to see Apple finally putting its keyboard problems to rest. So while this year's update may not be an essential upgrade for owners of more recent models, it does ensure that the 13-inch MacBook Pro continues to offer an attractive, portable design and strong performance for business users.

Apple 13-inch MacBook Pro (2019): A welcome update for the most affordable MacBook Pro

Which laptop is best for you? 10 essential specs and options to consider before you go shopping