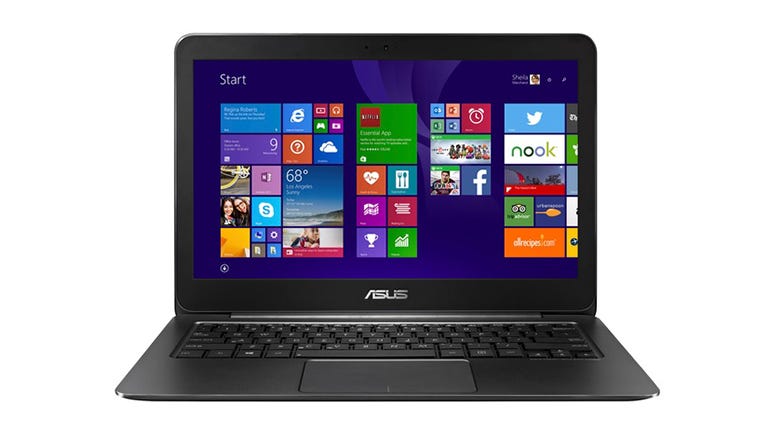 The 13.3-inch ZenBook UX305 is the first Core M ultrabook from Asus, and it has been widely compared with the MacBook Air -- an almost inevitable rite of passage for any slim, light ultraportable notebook these days. In fact, measuring just 12.3mm thick and weighing 1.2kg, it's slimmer and lighter than the 13-inch MacBook Air (17mm and 1.35kg).

The metal chassis provides decent protection from knocks and scrapes, and we're pleased to note that there's very little flex in the lid. The deep bronze colouring and circular etching around the Asus brand on the lid are both distinctive touches. Be warned, though, that this bronze coating scratches quite easily.

The interior carries on the metal theme: both keyboard and trackpad have a single sheet-metal surround, as does the screen, making for very clean lines.

The lid doesn't open much past 90 degrees, which is fine if you're a traditional document creator/editor and don't need the multiple usage modes offered by the likes of Lenovo's ThinkPad Helix 2-in-1 or Asus's own Transformer Book T300 Chi, for example.

The 13.3-inch 1,920-by-1,080-pixel IPS screen is superbly clear and sharp, and its matte finish is ideally suited to office workers. Viewing angles are good, although some may wish the brightness went a bit higher. There's no touchscreen option. If you need more than this screen's 166 pixels per inch (ppi), you'll find a high-resolution 3,200-by-1,800-pixel model on Asus's global website that delivers a very impressive 276ppi. Unfortunately this variant does not appear to be on sale in the UK.

The keyboard is not backlit and doesn't have the lightest of touches, but it's comfortable enough under the fingers. The cursor keys, which double up to provide PgUp, PgDn, Home and End functions, are very small and we found them cramped to use. We also missed a keyboard shortcut for the Windows 8.1 search function. Search is easily found on the Start screen, of course, but a Fn key would have been handy. Overall, though, we had no issues with the large, well-spaced keys.

The trackpad is both tall and wide. You need less than a single sweep to move the cursor fully across the screen both vertically and horizontally. The integrated buttons are responsive and multitouch gestures translate smoothly to the screen.

The ZenBook UX305 is powered by Intel's dual-core Core M-5Y10c processor, which runs at 0.8GHz, and up to 2GHz in Turbo Boost mode. Graphics are handled by the integrated Intel HD Graphics 5300. This is not the most powerful of CPU/GPU combos, but if your usage pattern revolves around mainstream tasks (word processing, spreadsheets, web browsing, email and some video viewing) you should be fine. There is 8GB of 1,600MHz DDR3 RAM on-board.

A key part of the Core M's design is low power consumption (TDP 4.5W, SDP 3.5W). This means the system does not require a fan, and consequently runs completely silently (a real advantage in our usually quiet office). In use, we noticed a very slight warming towards the back of the chassis, but nothing that concerned us. Asus has done what it can to help out here by designing the lid section to be slightly longer than the base at the back edge. This means it raises the back of the ZenBook UX305F a little when opened.

Connectivity includes 802.11ac wi-fi and Bluetooth 4.0. The thinness of the chassis means there's no room for a wired (RJ-45) Ethernet connector, but Asus does provide a dongle for use with one of the system's three USB 3.0 ports. One of these sits on the right edge, the other two on the left. There is also a Micro-HDMI connector on the right edge, alongside a headset jack and a pair of status lights: one flashes white when the lid is closed and the system is sleeping; the other illuminates when you're charging the battery. In addition to the two USB 3.0 ports, the left edge carries an SD card reader. Above the screen is a 720p webcam.

The major drawback with the ZenBook UX305F is its puny 128GB SSD. This is fast in operation (see below), but simply doesn't offer enough storage -- right out of the box only 93.9GB was available on our review sample. We can't be alone in wanting to store relatively large amounts of data on a laptop, and the lack of capacity is a deal-breaker for us. Asus does list 256GB and 512GB SSD options on its global website, but once again we can't find these for sale in the UK.

Asus talks up the quality of sound produced by the speakers, but in fact they're not particularly good. The maximum volume is reasonably high, but go there and the sound lacks bass punch and is a little distorted. Actually it lacks bass even at lower volumes. If you need to give frequent multimedia presentations, make sure there's a set of external speakers available.

The Core M processor is not made to break performance records, and the ZenBook UX305F's Windows Experience Index (WEI) scores (out of 9.9 under Windows 8.1) reflect this:

The Intel HD Graphics 5300 GPU is clearly a particular weak link, so don't expect this system to handle graphically demanding applications with any alacrity.

Asus says you'll get up to ten hours of life from the notebook's 45Wh battery, or eight if you watch continuous video. We certainly found battery life to be above average, regularly getting through an average working day without the need for a recharge. We don't say that very often!

The Asus ZenBook UX305F is a beautifully thin and light ultrabook that's solid and well made. We have a few reservations, including the absence of a keyboard backlight and distinctly average graphics performance. Our main complaint, however, is the meagre 128GB of SSD storage. If you need more than this, look elsewhere. If you don't, then the ZenBook UX305F represents excellent value for money.