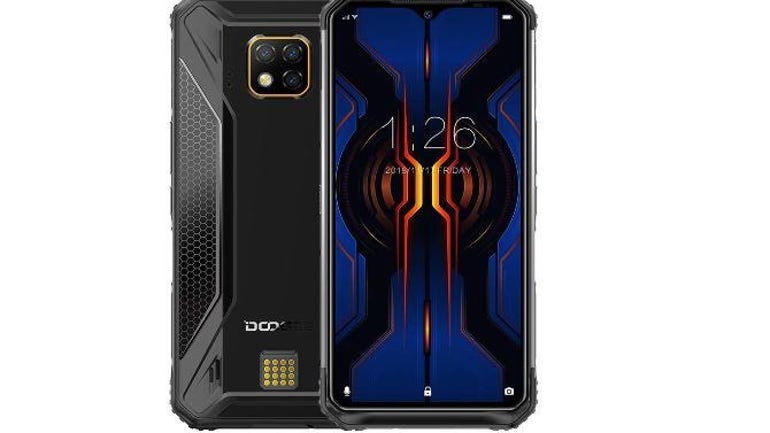 I quite like the Doogee rugged range of phones. Feature-rich, the company continues to innovate with new form factors and style options. The Doogee S95 Pro rugged phone shows that there is always room for yet another value add in its range.

The S95 Pro is rated at IP68 / IP69K. This means that it is shockproof and waterproof in water up to 10 feet deep for up to four hours of immersion. It meets the military standard for dustproofing, waterproofing, and humidity and has been specifically designed to withstand harsh conditions and extremes.

This is not really a chunky phone. Some of Doogee's range, like the S90, S80, and S60, is a little too large for my smaller hands. However, this is one of the more comfortable phones for me to hold. It is slimmer than other models but still manages to squeeze a 6.3-inch 2160 x 1080px FHD screen into its form factor.

Its dimensions are 6.6 x 3.1 x 0.5 inches, and it weighs 10.1 ounces. It is less rugged-looking than others in the Doogee range, yet comes with a slim, sturdy rubber casing for decent impact protection.

Inside the phone, there is an Helio P90 octa-core A75 processor running at up to 2.2GHz. It comes with 8GB RAM and 128GB ROM. You can also extend the storage with a Micro SD card up to 256GB. Its graphics card is an IMG 9XM-HP8 running at 970Hz

I was impressed with the look of the camera grid on the back of the phone. There are four lenses and an LED flash. The Sony triple rear camera is 48MP, 8MP, and 8MP to sense the surrounding area and adjust the lens accordingly.

The front camera is 16MP f/2.0 with an 80-degree wide-angle lens. Images and video quality are good, and there is a standard set of image manipulation tools on the phone.

The camera software does have two additional features: Beauty and Face Cute. The Beauty feature guesses your gender and age. With my hair in a ponytail band, the camera suggested that I was a male. Taking the ponytail band out, the phone correctly guessed my gender.

The Beauty feature also guessed that my friends taking selfies were 10 to 30 years younger than their true age. Perhaps this is a feature designed to make everyone feel better when taking selfies.

The Face Cute and Beauty settings let you whiten, smooth wrinkles, slim the face, enlarge the eyes, brighten the image, and slim my nose. You can also record videos using the Face Cute settings to make your selfie videos as perfect as possible.

The S95 Pro has a large 5150mAh battery, which is why the phone is heavy. But this battery will keep you going for over two days of fairly heavy usage.

The S95 also supports 10W wireless charging. It has NFC too -- rapidly becoming a must for manufacturers that want to appeal to consumers and business users alike.

Like almost all rugged Doogee devices, this is aimed at the practical worker. There is a suite of Toolbox tools to help with practical tasks such as measuring gradients, levels, heights, and angles.

This is a great feature set in the original OEM build, meaning that you do not need to download several apps to get the tools you need to do your job properly.

The operating system is Android 9.0, with minimal OEM bloatware extras to slow the phone down. The device has face and fingerprint unlocking with a fingerprint sensor on the lower right-hand side of the phone.

Holding the phone in my right hand, it made sense to register my thumbprint, as the thumb lies naturally in the vicinity. Unfortunately, I registered many 'partial' print messages in the UI while trying to register a new print of my thumb.

I had to squeeze the sensor quite hard to get a good print registration. Registering other fingerprints were easier, but that would require two hands, or holding the phone oddly to unlock the phone. I found that the rear fingerprint sensors on previous models seemed to be more accessible.

The face unlock was quite accurate and fast and recognized a variety of facial expressions, wearing glasses, taking my glasses off, etc. It also worked quite well in lower light conditions, but not outside in the dark.

One of the nice things about the S95 Pro is that this phone, like the S90, is modular, and includes a magnetic 3500mAh battery and 6W speaker module in the box.

On the back of the phone, there are 16 contacts for the module connection. I like the flexibility and simplicity of this approach. If you prefer, you can buy the base version of the phone on Amazon without the modules.

The phone's speaker is good enough, but adding the optional speaker module is something else. Twin speakers deliver a really rich rounded sound across almost all of the ranges and have great bass tones.

This module eliminates the need to carry an external Bluetooth speaker with you when you want external sounds. The phone is not too cumbersome, even with the speaker or battery module attached.

All in all, Doogee has overcome the clunkiness of the modules that let the S90 down, has listened to user feedback.

It has slimmed down the dimensions to make the phone far more portable if you have small hands, incorporated its most useful modules into the box, as standard, and has kept the OS free from OEM bloatware to keep it nimble.

For under $500, the Doogee S95 Pro is a very useful rugged phone with superb add-on modules that will take rough handling in its stride. It is certainly worth a closer look.