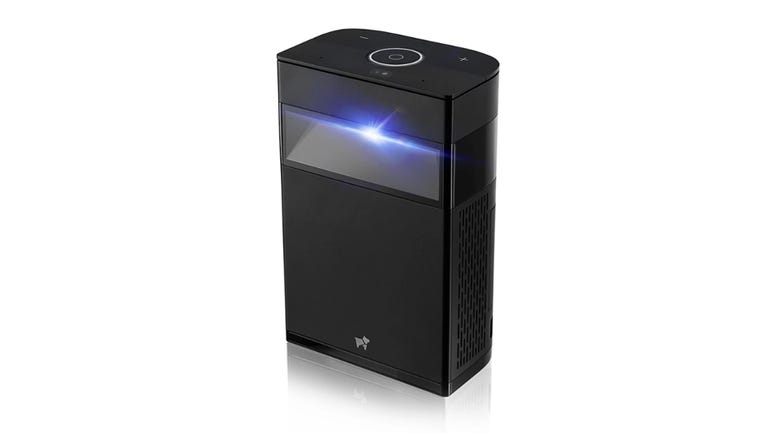 The Hachi Infinite projector is redefining how we will interact with our screens in the near future -- whether in the office or home.

This projector turns any surface into a touch screen, enabling you to interact with your computer or home entertainment theatre in ways you had not previously thought of.

It is a handy-sized portable projector that does not need to be continuously connected to a power supply. It is not too large either at 3.15 x 8.46 x 5.43 inches, and it weighs 2.86 pounds.

This is a nice looking device with a stylish remote control and it looks unobtrusive wherever it is situated in a room.

The only visible port is the USB-C port. Other ports (HDMI, USB-C, and 3.5mm headphone jack) are hidden behind a flip door at the rear of the device. On its top, there is a camera and microphone, volume buttons, and a power button.

The Hachi Infinite also has a sleek-looking remote control that is rechargeable. Thank goodness someone has finally thought to innovate remote controls that do not need batteries.

I am really delighted with this simple feature. The only downside is that the remote control is charged using a micro USB cable (provided in the box), not a USB-. This might be changed to the USB standard in future releases.

Inside the Hachi Infinite, an 8-core Qualcomm Snapdragon SDA670 processor is running up to 2GHz. Its OS is Android 9.0. The device uses a 10-point multi-touch technology called AnyTouch, which works on all surfaces to make them behave like a capacitive display.

It has a custom UI with dual 5W speakers, an 8-megapixel camera, and a bi-directional microphone. You can browse the internet and access any app, game, or entertainment from anywhere.

Its 0.39.1-projection ratio will project an ultra-short throw DLP and an HD display screen sized from 23 inches to 100 inches at a distance of 50cm. Its recommended screen size is 23 inches to 40 inches with a resolution of 1080p/2K/4K.

It has auto-focus and auto-keystone, so you do not have to spend time fiddling around with manual controls. It can be placed in a horizontal or vertical aspect depending -- whether you want to project the image onto a table or wall.

Turn the Hachi on, and touch the surface you are projecting onto. The touch control interface supports 10-point touch control and can distinguish between taps, long presses, two-finger zoom, and other gestures. Share the screen using either AirPlay or Miracast for iOS or Android, and connect using Bluetooth 5.0, or by the HDMI port

It does take a couple of minutes to get used to the interface and learn how to navigate through the screens, but it quickly becomes intuitive. I tried the device on a number of surfaces in the office, and at home, and I was impressed with the image quality and touch response.

The OS includes an AI learning app to enable AI-based health, fitness, and education integration. It support AI text recognition and provides feedback to provide learning guidance for children -- for example, learning how to spell. Hachi gave me a set of wooden letters and spelling templates so could test this out.

Unfortunately, I was not successful at all with the Hachi AI app, I could not get the Infinite to recognize any of the words in the app, so I could not work through the app's spelling exercises. Perhaps the surface I used threw recognition errors.

The online version is a set of web pages -- not the scan of the user guide document in pdf form. This means that you can use standard zoom controls to increase the magnification of each web page.

Often, user guides are printed in a tiny font and colored grey, which is hard to read without a magnifying glass. This online version is far better in my opinion. All you need is the URL to the guide.

There are a couple of mistakes in the UI. The English spelling in some screens needs to be tidied up a little, but these issues will be sorted out in the released version of the product.

The Hachi Infinite is available now to pre-order for $999 ahead of its expected launch date in late July. It was named a CES 2020 Innovation Awards Honoree for the device -- well-deserved in my opinion.

All in all, this is an innovative device that has a multitude of uses. From home theatre to games, you can use it in a variety of ways.

You can even connect it to your PC and display PowerPoint presentations if you can not think of a better way to use it. But that would be a waste of its interactive capabilities. Your horizontal or vertical surface can become as interactive as you like, limited only by your imagination.