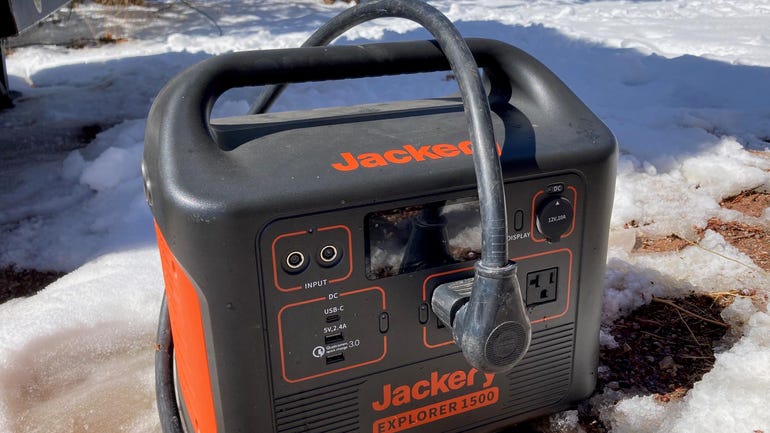 The arms race in portable power is entering the gnarly phase, with competitors cranking out mobile power stations capable of taking individuals or even groups seriously off grid for long stretches with ample power.

Forget phone chargers and even computer top-ups. The new norm in portable power is go-anywhere AC and DC power with sufficient storage to keep a whole camp running. Throw in solar panels and a built-in MPPT charger and you've got a refreshingly usable system to keep you charged up and off-grid for as long as your adventure, mission, or project demands.

Jackery has emerged as one of the go-to names in the space. After I reviewed the Explorer 1000 the company reached out to see if I'd like to put a new product through its paces. Timed with an annual event boastfully (and optimistically?) called Jackery Day, two new Explorer models recently hit the market, the Explorer 1500 and 2000. The new units are also available as a line of solar generators, which pairs them with four of Jackery's SolarSaga 100W foldable solar panels.

My Jackery Explorer 1000 solar generator has been an indispensable piece of kit for my family's sailing adventures, so I was keen to give the 1500 a try -- particularly because my family and I had just picked up a small travel trailer and were on the cusp of a four-state roadtrip through the southwest, a mix of off-grid boondocking on BLM and state park land with the occasional RV park thrown in (you know, for laundry, a stable internet connection, and a hot shower!). To accommodate the test, the Explorer 1500 quickly became a feature of our plans.

These are my first impressions.

The Explorer 1500 plays big brother to my older 1000 model. It's bigger and beefier, weighing in at just over 33 pounds compared to the 1000's 22 pounds and change. When the company reached out they gave me the option of testing their 2000 model, and I'm glad I thought better of it. The biggest Jackery model weighs a whopping 43.2 pounds, which would be a back breaker schlepping from the truck to the campground. The 1500, meanwhile, while big, wasn't overly burdensome for our uses, although it took up an entire backseat floor in our 4Runner and definitely became a packing consideration.

The color scheme and build are almost identical to the 1000, which is a good thing. A sturdy handle makes the cling and jerk of carrying it to camp straightforward and the interface is completely intuitive, stylish, more than up to the elements, as my two-month test bears out.

A small LCD screen, which can be woken via a physical "display" button, gives state of charge and time to full discharge. (Lithium ion batteries have a huge advantage over lead-acid in that you can repeatedly discharge them to zero, adding as much as 50% more usable power to similar capacity wet cells.) Output wattage is also displayed if the draw is greater than 15W, as well as input wattage and time to full charge.

Like its little brother, the Explorer 1500 has three three-prong AC outlets that fit a plug snugly. It should be noted that none of the Explorer line's AC outlets are grounded -- the third hole is merely a receptacle for a plug's ground pin. You switch on AC power via a physical button. When you do, an internal fan whirs to life. If there's even a relatively minor draw the fan will stay on, which could be annoying in some use cases, such as if the unit were being used inside a camper van at night. We always kept the Explorer 1500 outside our trailer, however, and the noise was never an issue.

DC outlet options include a USB-C, two USB (one 2.4A and one Qualcomm quick charge 3.0) and a cigarette lighter style carport. The carport offers 10A, which predictably was not enough juice to keep my motorcycle-style air compressor chugging along when we had a flat.

The unit isn't ruggedized and it isn't water-proofed, but I didn't have any compunction leaving it out during March flurries and scorching April desert days, and the case and finish have held up without any notable weathering. I definitely wouldn't drop the unit more than inch, but it isn't fragile and neither did I feel like I had to baby it.

The Solar Generator 1500 and 2000 kits come with four foldable 100W solar panels. They're the same panels that come with the 1000 (though that kit comes with two) and they're excellent all around. They have integrated handles and a textured plastic protective layer over the solar cells that feel durable and survived multiple instances of my two-year-old daughter trotting over them. They got dusty and damp (not recommended) and work as well now as when I received them.

Two panels plug into pigtails on an adapter, so you need two adapters total for the four panels. The adapters plug into the two input ports. On sunny days I was regularly getting around 340W input according to the Jackery display, and even cloudy days gave me a respectable 150-200W, well above my normal usage. It was incredibly satisfying to watch the battery percentage rise and the time to full indicator drop while I was also chilling popsicles for the kids in our AC fridge/freezer and charging several devices.

Instead of an acute test to evaluate performance, such as the one I did for the Jackery 1000, our upcoming trip offered excellent conditions for a dynamic in-the-field test.

Our trip revolved around a remodeled 1995 Dutchmen Duck travel trailer. The trailer has a 12V system and I put in a new AGM battery before leaving, but we would be boondocking for most of our journey. For convenience the previous owner had removed the 12V fridge and put in a decent-sized AC fridge/freezer. The trailer came with a microwave, which I promptly discarded for taste reasons, and I had a new converter installed to keep the 12V system up and running while on AC power. There's also a rooftop AC unit, though we wouldn't be using it much as it was a chilly spring.

If you're not familiar with RVs, travel trailers, or boats with shore power hookups, the AC system (and the DC system via a converter) gets power via an extension cord you plug into a 110V outlet (typically 30A or 50A) at a campsite or dock. But again, we were boondocking. The plan, then, was to use an adapter for our 30A male plug so we could plug right into the Jackery three-prong 12V.

Our power usage would vary significantly throughout the day. During our trip we were mostly staying on BLM and state park land that had decent LTE. My wife and I would both be working from the road and our older kiddo (5) would be doing school via Zoom for a few hours each morning. That meant keeping laptops, Mifi devices, phones, and tablets charged throughout the day. The fridge would be constantly running, albeit on a low setting, throughout the day when at camp. During hotter stays, such as the scorcher down in White Sands, New Mexico, we might run an oscillating fan. The 12V battery would stay charged via the Jackery when not hooked up to our truck, when it got juice from the alternator. An on-demand electric water pump kept our fresh water pressurized, and vent fans over the stove and on the ceiling in the bathroom kept air circulating.

All told, at any given time we might draw an average of 140-190W, giving us 8-10 hours of power with the Jackery's 1500Wh. Of course that doesn't account for the input wattage those four impressively efficient 100W solar panels offered. During sunny hours we were typically net positive. It was very common for late afternoon to roll around after a heavy draw day with the Explorer 1500 completely charged.

Yup, I think it is. This is a pricey unit, and as I said in my review of the Explorer 1000 it's a shame the solar generator model doesn't offer more of a discount for buying the solar panels. Those solar panels are pricey compared to other units on the market, although again, the build quality is excellent and I found they performed amazingly across a variety of conditions.

If you're looking for a solar generator and need some serious power, I'd definitely give Jackery a look. But I'd also take a close look at your power needs. Could my Explorer 1000 have served my needs during the trip? Probably 90% of the time it could have, the major limitation being the two panels in that solar generator kit compared with four in the 1500. Did I regret not asking to try out the Expedition 2000? Not once; that thing is seriously big and heavy and I just don't need that much power.