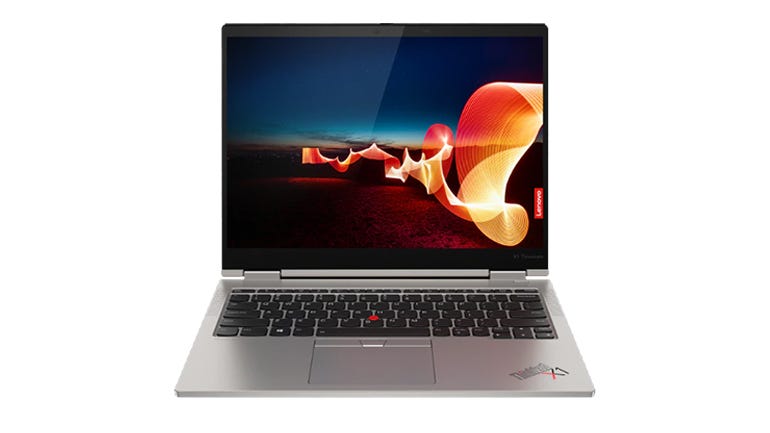 Lenovo's premium, business-focused ThinkPad X1 range continues to expand. Designed to marry high-spec functionality with great design, X1 laptops can be expensive -- the last ThinkPad X1 I reviewed, the ThinkPad X1 Nano, has a starting price of £1,739.99 (inc. VAT), or $1,487.40 in the US. This is closely matched by the convertible ThinkPad X1 Titanium Yoga, reviewed here, which starts at £1,669.99 in the UK, or $1,474.50 in the US.

At just 11.5mm thick, this Intel Evo-branded device is Lenovo's thinnest-ever ThinkPad. It may not be the lightest ThinkPad, but at 1.15kg it's hardly burdensome to carry. The titanium, carbon fibre and magnesium alloy materials used in the chassis make this a tough device: I couldn't flex the lid in my hands enough to cause any concern, and the base feels solid too. But even though it has passed MIL-STD 810H testing, I'd still be tempted to use a protective sleeve to store and transport the ThinkPad X1 Titanium Yoga. Apart from anything else, the slightly textured finish on the lid is lovely, and I'd hate to scratch it.

The silver chassis is eye-catching, and the ThinkPad marque on the lid, with its illuminated dot over the 'i', is raised from the base metal as if it has been stamped; on the wrist rest inside the chassis it's indented, and fashioned from a more noticeable, brighter silver than its surround. If you want your expensive kit to look the part, this branding will tick that box.

The ThinkPad X1 Titanium Yoga occupies 297.5mm by 232.2mm on the desktop, which is rather narrower and deeper than you might expect due to the 13.5-inch screen's 3:2 aspect ratio. And what a fantastic screen it is. The QHD (2,256 x 1,504, 201ppi) IPS panel can deliver up to 450 nits of brightness, which is more than enough for indoor settings and adequate for use outside too. It's also touch responsive -- a necessity for working in tablet mode -- and supports 100% of the sRGB colour space and 72% of NTSC.

Given all this goodness, it's a pity that the screen bezels are rather wider than they should be for a premium laptop. The short bezels I measured at close to 4mm, while the top and bottom bezels are around 10mm and 18mm respectively. For the record, the screen to body ratio is 78.4%.

There's room above the screen for a 720p IR webcam with Lenovo's sliding privacy cover. As well as supporting Windows Hello face recognition, the camera can be used to provide an alert if someone is standing behind the user and able to read the screen -- so called 'shoulder surfing'. However, there's no screen-obscuring option to prevent anyone sitting to the left or right from reading content and viewing angles on both horizontal and vertical planes are excellent.

When working in laptop mode, a pair of speakers sitting left and right of the keyboard direct sound upwards. They worked well for video calls and for spoken-word audio, but if you want to take advantage of the high-quality screen for post-work entertainment, you may rue the lack of bass. I didn't notice any muffling when using the speakers in tablet mode.

The backlit keyboard has Lenovo's distinctive pot-bellied main keys, space has been made for a wide double-height Enter key, and the cursor keys are relatively large. Travel is a little shallow, and while the keys spring back nicely the action feels less smooth than I've come to expect from Lenovo. These issues didn't stop me achieving my usual touch-typing speed, and I could definitely live with this keyboard, but Lenovo hasn't quite lived up to its usual exemplary standard here.

The signature TrackPoint sitting between the G, H and B keys is responsive, and the three buttons above the trackpad work well with it. The touchpad also worked fine.

The Fn row keys are relatively small and lack the pot-belly design of the main keys. They include a pair of call management keys alongside keys for brightness, volume, microphone management, second screen management, and toggling Wi-Fi on and off. There's a narrow lozenge-shaped fingerprint sensor above the keyboard.

Physical connections are limited to just two USB-C Thunderbolt 4 ports and a 3.5mm headset jack. The thinness of the base may mitigate against fitting in USB-A or HDMI ports, but the fact remains that with just USB-C on-board, a docking hub or adapter(s) will be required. It's also worth noting that when the ThinkPad X1 Titanium Yoga is being charged, there is just one available port (unless you invest in a docking station).

On its UK website, Lenovo says the ThinkPad X1 Titanium Yoga's 44.5Wh battery should last for up to 8.9 hours, while the datasheet quotes a more optimistic 11.5h. Under my normal workload of writing into web apps, browsing and streaming media, the fully charged battery fell to 50% after three hours. This suggests a much more modest mainstream productivity uptime of around six hours. Bottom line: knowledge workers shouldn't expect to get all-day battery life from this laptop.

Lenovo doesn't mention fast charging. In one test session with the battery at 34%, I applied a 30-minute charge via the 64W adapter, whereupon the battery rose to 52%. Charging at this rate might be enough to provide enough extra working time in extremis.

As the thinnest ever ThinkPad, the X1 Titanium Yoga is a standout laptop. It has some top-notch specifications, and the QHD IPS screen is superb. But it's not without drawbacks, and arguably, its premium price suggests there should be fewer of them.

The speakers are frustratingly short of bass, the keyboard isn't quite up to Lenovo's usual high standards, battery life is disappointing, and the screen bezels could be narrower. Anyone working with legacy connectors will have the added expense of acquiring a USB-C hub or adapters.

Overall, although this is an impressive convertible laptop, you can get better value elsewhere, both from Lenovo and other manufacturers. We're looking forward to Gen 2 though.