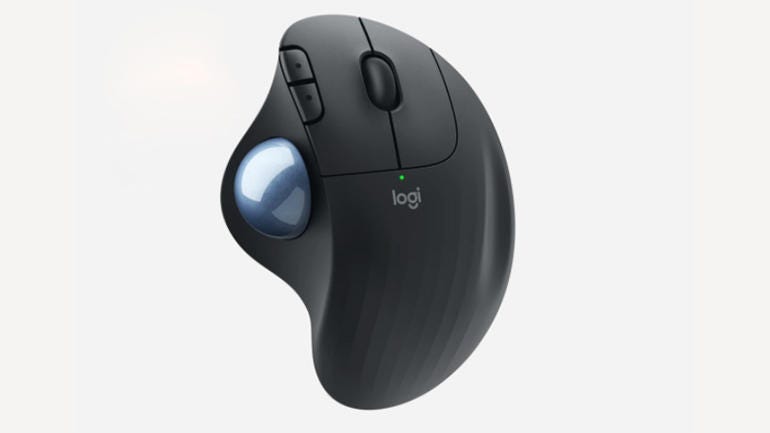 Trackballs are an acquired taste. Some look on them as oddities, but here's a confession: I've been using a trackball for well over a decade and find the arrangement comfortable and easy to work with. I also use an ergonomic keyboard, and I've never had a hint of RSI. Are the two factors related? Maybe, but I can't know for certain. But I do know the trackball as a format gets the thumbs-up from me, as it were.

Logitech's latest trackball, the Ergo M575, costs £44.99 (inc. VAT) or $49.99, and comes in either off-white or graphite, both with a mid-blue coloured ball located on its left side where it'll fall under your thumb (if you're right-handed; there isn't a version for lefties). The overall design resembles earlier trackballs from Logitech, such as the M570 and my own everyday trackball, the MX Ergo. It's a good design, it works well, and Logitech hasn't messed with it.

The idea is that your palm sits comfortably on the main body and your thumb moves the ball, which moves the cursor, while first and second fingers address the wheel and buttons. The wheel sits between two large buttons, with a pair of smaller buttons towards the left, sitting proud so they're easy to find with the forefinger. The Ergo M575's main palm rest area has a slightly ridged pattern, which Logitech says is an aid to grip. I don't know about that: my MX Ergo is ridge-free, and I grip it just fine. Still, even if the ridges don't offer any usability advantage, they do look nice.

One thing the Ergo M575 lacks that's present on the MX Ergo is the ability to change the on-desk angle via a metal footplate. I tend to use the more upright position, so working flat on the desk with the Ergo M575 took a little getting used to, but anyone new to the trackball format won't be concerned about that.

Computer connectivity is via either Bluetooth LE or proprietary 2.4GHz wireless -- a USB dongle catering for the latter sits under a cover that also protects the trackball's AA battery. It's easy to switch between connectivity methods using a button on the base, while a switch next to the button turns the mouse off so it doesn't drain the battery when it's not in use. It's interesting that Logitech has reverted to standard battery power -- the MX Ergo has a rechargeable battery. Logitech says the Ergo M575's AA battery will last up to two years with the USB receiver, or 20 months when using Bluetooth.

The laser sits in a recess in the cavity that houses the ball, which over time will accrue dust and other detritus, reducing the ball's freedom of movement and causing jerky or unreliable movement. I have the same issue with the MX Ergo, but the ball pops out easily so the cavity can be cleaned. Logitech has put a hole on the underside of the Ergo M575 through which a smallish finger can squeeze to push the ball out of its cavity. It's an easy job to do.

I found using the Ergo M575 to be a smooth and trouble-free experience. The two large buttons deliver a satisfying 'click', while the small buttons respond with a quiet 'thunk'. You can refine accuracy up to 2000dpi, although the 400dpi default will be enough for most users. To change the tracking resolution and customise the Ergo M575's buttons -- including making bespoke settings for particular applications -- Logitech offers its free Options software. This app offers more complexities than many of us are likely to need, while remaining easy to use. Logitech does well on the sustainability front too, using recycled plastic in the product where it can, and entirely cardboard packaging -- even printing the quick-start guide on the internal packaging rather than on a separate sheet, which is a nice touch.

Remote work: 10 ways to upgrade your working from home setup