Microsoft Surface Duo review: Buy it for dual screen use, not for its old specs 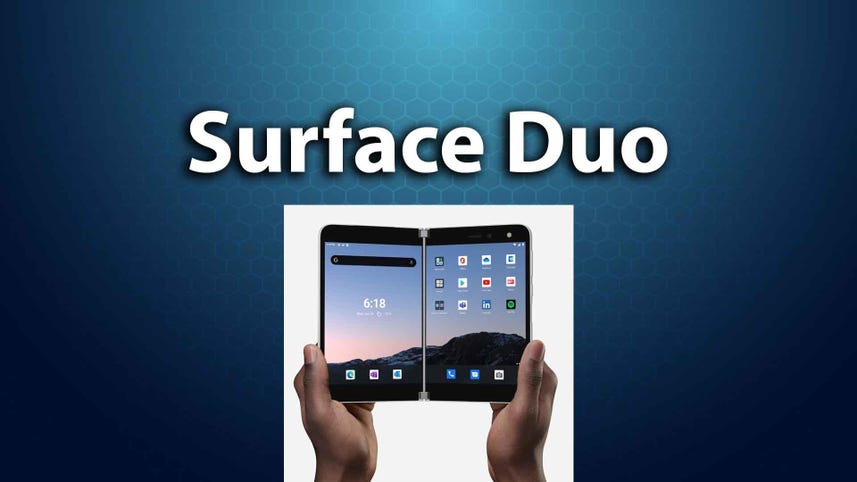 Every employee in my engineering firm, whether an engineer, accountant, or manager, has at least two screens connected to their computer for optimal productivity. The Surface Duo offers a similar layout that you can hold in your hand and take with you. If you get more done with two screens on the go, then this may be the device for you, but two screens on a phone may also be too distracting.

The Microsoft Surface Duo has been my primary smartphone for the past three weeks and even after a day it was clear to me it is a device built for productivity. People tend to either love or hate, with little room for middle ground, due in large part to the $1,400 starting price.

I've been a Microsoft mobile device user since 2000 and even now one of the reasons I kept thinking I need to keep the Surface Duo is because I love the Microsoft logo emblazoned on the front of the Duo and the idea of what Microsoft is bringing to the table with the Duo. Looking deeper than the front of the device, I have been quite satisfied with the experience. It's only when I put it next to the Z Fold 2 that I realize the Z Fold 2 is the device for my needs.

ZDNet's Mary Jo Foley stated the following in her review: "Two weeks later, I have to say that I'm not sure that the Duo scratches any itch for me. It's an interesting concept, but it definitely feels like a Generation 1 solution that's in search of a problem more than a solution to a problem I have with mobile devices."

One would think the Surface Duo would be perfect for a person like me who spends many hours a day on a phone. Prior to the coronavirus lockdown, I was commuting two hours a day on a train, traveling for business monthly, using Microsoft products for work (Outlook, Teams, OneDrive, and OneNote), and using my phone as my secondary computer. Things have changed a bit with remote work, but even then there were a few of my standard practices over the past three weeks that are compromised on the Surface Duo, and for more than $1,400 I'm not ready to make those compromises.

Looking at the specs above and throwing out the two displays, the Surface Duo appears to be a mid-range Android phone. The story of the Surface Duo is much more than a specifications sheet, but for $1,400 one does have to consider the technology inside the device.

Also: The Surface Duo isn't for everyone. But here's who will love it

The hinge and outside of the two displays is attractive and compelling, especially as a Surface fan. After three weeks, the hinge has the same tension and smoothness as it did when I first opened up the box.

The Surface Duo is very thin and it fits just fine in my pants and shorts pockets. I love opening and closing it, as well as flipping it into various modes.

The two 5.6-inch AMOLED screens look great and provide a great visual experience. The bezels are a bit large for my tastes, but there is a need for some amount of bezel in order to hold and use the device.

There is a single 11-megapixel camera positioned at the top of the right screen. It does fine in well-lit environments, but is pretty terrible in low light conditions and has very few options for taking creative shots. I primarily intended to use it to capture documents, but even then it did not perform consistently. Flipping the displays around to use the camera was also not a reliable, consistent experience.

The speaker is acceptable but doesn't come close to competing with modern smartphones with stereo speakers. The power button serves as the fingerprint scanner and this was a flawless experience that I would prefer to see instead of under display fingerprint scanners.

Battery life has been solid for the past three weeks, getting me through full, long days every single day. I never worried about the Surface Duo dying during the day, which is a great sign even when using two displays.

The Surface Duo retail package includes a silicone bumper that attaches with two-sided tape. I put it on after a couple of days and it does a great job of protecting the edges and keeping the device from sliding off of a table.

Also: Surface Duo is a productivity revelation, not a form factor revolution

The Surface Duo runs Android 10 with the September 5, 2020 Android security update. The Microsoft Launcher serves as the foundational UI for the device and is a fairly stock Android experience.

Out of the box, the Surface Duo uses the latest Android gestures for navigation and after trying out the old Android three-button controls I quickly went back to gesture navigation. I found that gesture navigation lets you quickly and easily swipe apps around on the display and is what the Duo was optimized for.

The key special element added by Microsoft is App Groups. Pair up two apps into a single shortcut on your home screen and with a single tap two apps launch at once, one app on each display. After three weeks, I have about 10 of these App Groups setup for optimal productivity.

You can swipe up from the bottom and then drag an app to the other display or drag and hold it over the center to have it open across both screens. Some apps, mostly Microsoft apps, are optimized for this cross-gap full screen experience. For example, in Outlook your inbox appears on the left display and then the contents of the selected email appear on the right display. While this setup is the primary configuration I like to use, there is no way to have Outlook launch like this so every time you want a cross-gap experience you have to drag an app up and across the center.

Phone calls are best made with a headset or in speaker mode. The device is a bit wide and awkward to hold up against your ear for phone calls.

If you want to use apps primarily in single display mode, there is no special development needed as the apps function just like any standard smartphone. Spanned apps need some tweaks for an optimal experience, but if the developer hasn't done anything to the app it should still work in a stretched out manner. A couple apps did not work in spanned mode, but at the end of the day I only used optimized apps across the gap.

Tent mode is useful for watching video content in a hands-free manner. When I watched videos, I tended to use the Surface Duo in "laptop" mode with the top display playing video and the bottom screen used for checking email, browsing the web, and other secondary functions.

I thoroughly enjoyed the experience where one app prompts me for a password and I have my password manager on the other display. Drag and drop also works in select apps, but I honestly didn't use this much in my day-to-day work.

The closest dual-screen experience in the smartphone world is the LG Velvet or LG V60 with the Dual Screen cover. LG gets a lot right with extremely capable phones and a similar two display with center hinge design. If LG would spend more time tweaking the software to support the dual-screen experience then there would be little reason to purchase the Surface Duo.

Why am I returning the Surface Duo?

There is a lot to like about the Surface Duo and it is a solid start for Microsoft. That said, here are several reasons it just isn't the device for me:

Erica Griffin put together one of the best videos comparing the Surface Duo to the Z Fold 2 with a focus on productivity. She clearly shows many examples of why the Surface Duo is an excellent option for many people and her 12-minute video may convince you to give one a try.

I love the Microsoft Surface Duo hardware, except for the bezels, but there are too many compromises with the specifications and beta software. Microsoft provides a glimpse of what is to come in the future and I look forward to the next generation device that is sure to apply many lessons learned with this first attempt.

For those who want to use two apps at the same time in a full screen smartphone format to get work done then the Surface Duo may be perfect. Then again, if you don't need to swipe apps across the displays then you may want to consider a LG Dual Screen device as these offer more modern smartphones and much better stylus support. If the Surface Duo was available for $900, then I would consider keeping it, even in this first generation configuration.

Microsoft's Surface Duo is a polarizing device and even in my three weeks with it, I experienced love and hate for it. Maybe I'll miss it after some time away, but after swapping my SIM back into a Note 10 Plus I highly doubt I'll think of it again until the second generation is revealed.