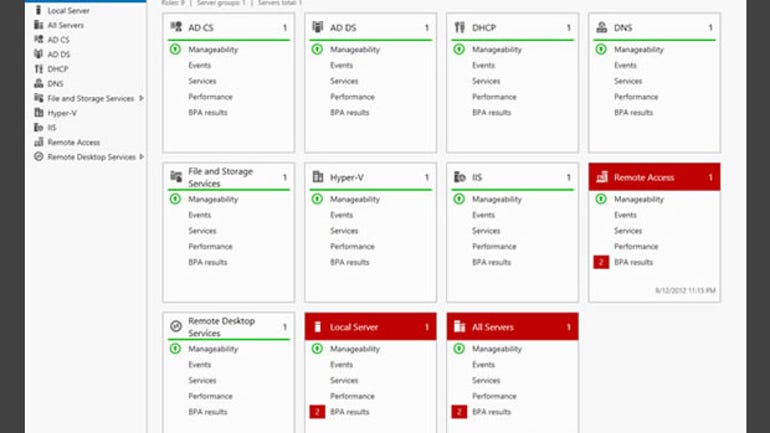 The heart of the Windows enterprise ecosystem isn't the desktop, or the tablet, or even the smartphone. It's Windows Server — the old reliable that sits in the datacentre and just keeps ticking along, managing your files, handing your email and running your business. You might think that meant you'd never need to upgrade — but businesses and the technologies they use change, which means that Windows Server (which was released to manufacturing on 1 August and became available on 4 September) needs to change too.

On the desktop, with Windows 8 , that change is obvious, with a new touch-oriented user interface and a new programming model. In the datacentre, with Windows Server 2012, there's also plenty of change: Microsoft is looking ahead to a future of private and public clouds, where information is everything, and users can access it in any way they want. It's a brave new world of work — but is Microsoft's latest server up to the job?

Start me up
Turn on Windows Server 2012 for the first time, and you're presented with a server version of the Windows 8 Start screen, complete with Store. You'll need to login with a fresh administrator account to access the store (it won't work with the default administrator user). Click on any of the tiles, and you're taken straight to the familiar desktop, and a new modern-style UI for the multi-server Server Manager. This is where you'll spend most your time, as it's where you'll add and manage features, launch tools and watch for alerts. Much of what Server Manager does is encapsulated in PowerShell cmdlets, and it's well worth getting to grips with PowerShell 3.0 as it's how you'll manage UI-less Server Core installs — as well as using it to remotely manage all the servers in a network (in conjunction with the tools in System Center 2012 ).

If you prefer to use a desktop PC to manage Windows Server 2012, Microsoft has released a preview of its Remote Server Administration Tools, which bring Server Manager and other server tools to Windows 8. With RSAT on desktop PCs it's a lot easier — and a lot more secure — to deploy servers using Server Core, as your management tooling can run independently of your servers.

Going virtual to the private cloud
The heart of Microsoft's private cloud strategy is Hyper-V. With the latest version of the hypervisor, there's not just feature parity with VMware, but plenty of new features that take advantage of the latest hardware. This allows Microsoft to support massive clusters of compute and memory, and to work with storage hardware to speed up VM migration. The cloud isn't just about virtualisation, and much of Microsoft's work in the new Hyper-V is about using it to deliver a compute fabric to sit alongside the Windows' new storage fabric. While Windows Server 2012 gives you a lot of virtualisation features out the box, you will need to implement System Center 2012 to get the most out of any private clouds you build — especially if you're planning on using template-driven service definitions to manage and deploy servers and applications.

Microsoft is introducing a new format for its VHD virtual disks with Windows Server 2012, with VHDX. It's more efficient, and able to support much larger disk sizes. You can convert existing disks to VHDX format, using Hyper-V's disk edit tool, but you'll need to merge any snapshots before making the conversion.

Hyper-V also contains the seeds of a major change for Microsoft's virtualisation platform. It's now possible to swap out the basic virtual switch for more complex third-party tooling such as Cisco's Nexus soft switch. By opening up the Hyper-V virtual network to tools like this, Microsoft is giving the hypervisor the tools it needs to become part of a software-defined network (SDN) — allowing rapid reconfiguration of networking features to handle policy-based service deployment. It's hard to overstate just how big a feature this is, as SDN is an important component of both public and private clouds. Support for SDN switches inside Hyper-V goes a long way to making Hyper-V the basis of a dynamically-managed private cloud rather than just another infrastructure component.

Managing, storing and accessing information
Storage is the other part of Microsoft's private cloud platform, and Windows Server 2012 introduces a new way of working with disks — as well as a new file system, ReFS. Using the File and Storage Services tools in Server Manager you can quickly build a thinly provisioned virtual storage pool, with support for mirroring on mismatched consumer drives. It's an approach that means you can quickly add new drives to a pool, and manage directly attached and network storage, as well as storage array networks, from the same console. When tied in with the service management tooling in System Center 2012, it's a quick way of rapidly deploying services as well as handling live migrations of existing virtual servers.

With ever more mobile users, managing information access and security is increasingly important. Although VPNs remain an effective tool for controlling access to servers, Microsoft introduced Direct Access in Windows Server 2008 R2 . Using IPv6 tunnelling to securely extend an intranet to mobile devices, Direct Access was complex to set up and hard to use in conjunction with many SME networks, as it had difficulties traversing NAT firewalls. That's all changed in Windows Server 2012, with a revamped Direct Access that addresses many of its predecessor's shortcomings. The new version will work with single-homed servers, and with NAT devices, defaulting to using IP-HTTPS to traverse most common firewalls.

Direct Access is also a lot easier to configure and deploy, with a simple wizard (you can configure both Direct Access and a VPN in four or five clicks) and a graphical management console. Policies are automatically pushed out to domain-joined devices, and you can configure details of support contacts as well as naming the connection.

BYOD deployments need better file management tools, and Windows Server 2012's Dynamic Access Control replaces complex ACLs with rule-based file and directory policies. Using Dynamic Access Control you can build rules that control access to files based on user claims — whether they're part of a group or a role, and whether their device supports Information Rights Management encryption tools. Dynamic Access Control is managed using Active Directory, but works with non-domain joined devices, as it uses user properties rather than devices.

Ready for the datacentre, today
Windows Server 2012 is a powerful tool, and an easy upgrade from Windows Server 2008 R2. We were able to upgrade a server in less than an hour, including upgrading Active Directory schema for an entire small-business network. All existing applications carried on running, including websites and applications, although we did choose to upgrade the virtual hard disks of a small private cloud once we were up and running. A simplified set of SKUs makes it easier to choose and licence your servers, and the latest Hyper-V release turns even the smallest office server into a full-fledged private cloud — complete with software-defined networking and storage pools.

Microsoft has done an excellent job on Windows Server 2012. It has managed to add new features and new tools, while still working as a drop-in replacement for earlier Windows Server releases. That's going to make it a lot easier to get up and running with a new server OS, while giving you an ideal migration path to tomorrow's world of private and public clouds. It's not often that we describe a server operating system as a must-have upgrade, but if ever there was one, this is it.