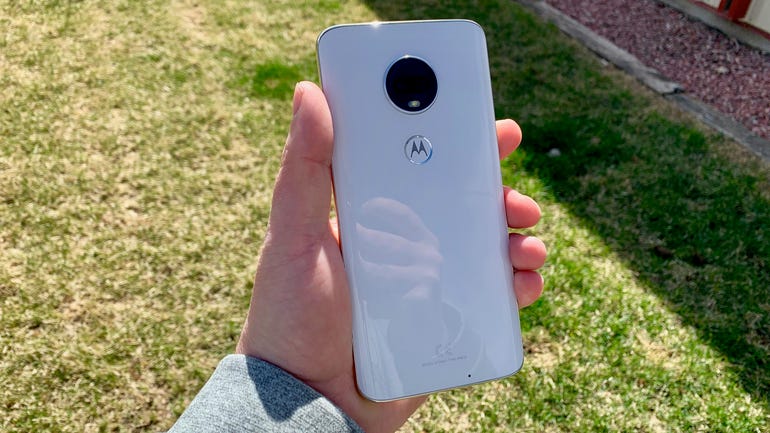 Motorola's latest lineup of budget-conscious smartphones includes four new devices: The Moto G7, Moto G7 Play, Moto G7 Plus, and the Moto G7 Power. The lineup of devices ranges from $199 to $299/€299 and are every bit what we've come to expect from a Motorola phone over the past few years. That is a high-end experience for a fraction of the price.

ZDNet's Sandra Vogel reviewed the Moto G7 Plus after its European launch in February and labeled it a "top-quality budget smartphone" thanks to its design, battery life, camera, and added Motorola features such as Moto Actions.

I've spent the last few weeks testing the Moto G7, with plans to test the G7 Power next. The G7 is an excellent budget smartphone. Let's take a closer look.

When unboxing the Moto G7, the first thing I noticed was its all-glass back. The premium look and feel of the phone is something that's normally reserved for Samsung's or Apple's flagship lineup, with the phone costing three times that of the Moto G7. The back is curved at the edges, meaning it's easy to get a comfortable grip on a device that boasts a 6.2-inch display.

On the back of the phone is the familiar Motorola logo, which doubles as the fingerprint sensor. Just above that is a 12MP and 5MP dual-camera system, encompassed in a circle bump.

On top of the phone is where you'll find the SIM card and microSD card tray. You can top up the 64GB of storage with another 512GB if you need more space. On the left edge is the volume up and down rocker, as well as the sleep/wake button. On the bottom of the phone is a headphone jack (!!) and a USB-C port that's compatible with Motorola's TurboPower fast charging tech. Motorola earned a few bonus points for including a headphone jack and a USB-C port -- something that's becoming increasingly rare in more expensive phones.

The Moto G7 is the first phone I've used that has a teardrop notch at the top of the screen. The teardrop only takes up enough space to make room for the front-facing camera, and nothing else. I appreciate the subtle approach, particularly because it leaves room for notification and system icons along the top.

Motorola still hasn't included any sort of IP-level water or dust resistance with the G7. Instead, the G7 uses a water repellent P2i nano coating. According to Motorola, that means the phone should withstand a splash or spill, but not a drop in the pool. Overall, some sort of water protection is better than none, but I would love to see a more robust level of protection.

The G7 lacks NFC capabilities, meaning you won't be able to use Google Pay for mobile payments. It's not a deal breaker by any means, but we're at a point that NFC should be a standard feature on all phones. If a company can put two rear cameras in a phone, it should have NFC. The number of locations that accept mobile payments has grown tremendously, especially in the US, over the last few years.

Almost every time I use a budget smartphone, I'm surprised by its performance. For all of the attention companies and reviewers give to the latest Apple A-series processor or the high-end Qualcomm Snapdragon processor -- and rightfully so -- the lower end processors from Qualcomm deserve their own praise.

The Moto G7 was no exception. Whether I was trying my hand at my family's latest mobile game obsession, Amaze!, or doing my daily routine of bouncing between email, Slack, Messenger, Twitter, and Reddit, I never felt like I was using an underpowered phone.

The 3,000 milliamp-hour battery had enough power to get through a normal day for me, starting around six in the morning and winding down around 10 at night. Included in the box with the G7 is a 15W TurboPower wall adapter that Motorola promises will provide nine hours of battery with just 15 minutes of charge time. I'm not sold on those numbers but can confirm that TurboPower does a good job at quickly charging the G7's battery.

The camera on the G7 is at times impressive, and other times just alright. I found that when using something like portrait mode if the lighting wasn't just right, the camera struggled. When using the regular camera mode, I found the G7 to slightly overexpose most shots. This is typical of most lower-end phones, however, so I wasn't terribly surprised.

I like the placement of the fingerprint sensor on the back of the G7. It's in a spot that's easy to find with my finger, and the phone unlocks without any delay once it registers my fingerprint. I did have some issues with the sensor not recognizing a registered finger, but after deleting and re-registering my fingerprint I have yet to experience any hiccups.

A budget phone that punches above its weight

The Moto G7 is a $300 budget phone that looks, feels, and performs like a high-end phone.

I can't think of another low-end smartphone line that's continued to push the boundaries of what a budget smartphone is and should be able to do. Motorola continues to blur the lines of budget and high end, without raising the end cost. You can buy three, maybe four, Moto G7's for the same cost as one iPhone XS Max or Galaxy S10 Plus. Unreal.

If you need a new phone but don't want to spend a ton of money, you can't really go wrong with the Moto G7.