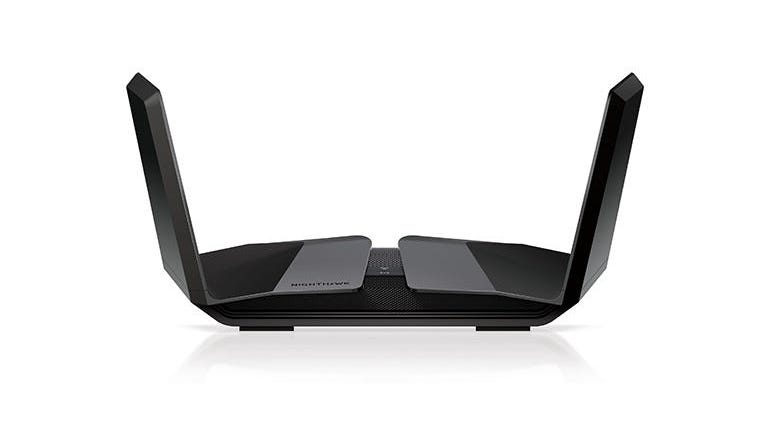 While most of us are deciding whether or not to upgrade to a new router that supports the latest Wi-Fi 6 standard (a.k.a. 802.11ax), it turns out there's another new flavour of Wi-Fi already on its way. Called Wi-Fi 6E (E for 'Extended'), this new standard adds the 6GHz frequency band to the 2.4GHz and 5GHz bands currently supported by Wi-Fi 6 and its predecessor, Wi-Fi 5 (formerly known as 802.11ac).

With the 2.4GHz and 5GHz bands becoming increasingly crowded, the new 6GHz band adds additional capacity that, according to the Wi-Fi Alliance, provides strong performance "even in very dense and congested environments", such as sports arenas and business complexes.

Several networking companies have announced new routers that support Wi-Fi 6E, but Netgear is first off the starting block with its new . Priced at $599.99 (UK pricing TBA), the RAXE500 is very much a top-of-the-range option, boasting a top combined speed of 10.8Gbps, and eight internal antennae designed to stream data to as many as 60 devices simultaneously.

Netgear states that the new 6GHz band also allows the use of high-bandwidth 160MHz 'channels' -- rather like sub-bands within the main 6GHz band -- that are ideal for high-capacity applications such as streaming 4K or 8K video for entertainment or video conferencing.

The router is powered by a 1.8GHz quad-core processor and supports the latest WPA3 security standard. As well as providing high-performance Wi-Fi, the RAXE500 also includes multiple high-performance wired connections for an office network. There's a dedicated 2.5Gbps 'multi-gig' Ethernet interface for high-speed internet connections, as well as five additional Gigabit Ethernet ports for wired devices, which also provide the ability to combine -- or 'aggregate' -- two ports for higher speed. The router also includes two USB 3.0 ports for connecting USB storage devices that can be shared with other network users.

Netgear's Nighthawk range tends to be primarily aimed at home users, but with so many people still working from home, Netgear is describing the RAXE500 as an 'all-purpose' router that's suitable for video conferencing and e-learning as well.

The company hasn't yet brought Wi-Fi 6E to its business-oriented Orbi Pro mesh systems, but it has just introduced a new Orbi Pro model that aims to provide a more affordable entry-point for Wi-Fi 6 technology.

Previous models have been expensive tri-band mesh systems aimed at larger businesses, but the new  is a more affordable dual-band option for home office use and small businesses. There are two options available, both providing Wi-Fi 6 speeds of 1.8Gbps and supporting up to 40 devices. Prices start at $299.99 for a two-piece system suitable for covering areas of up to 2,000 sq.ft, while a three-piece system that can cover 4,000 sq.ft comes in at $399.99. Like other Orbi Pro systems, the Mini allows you to create four separate networks (SSIDs) that can be assigned to different tasks or different groups of users, such as guests, employees, IT staff or admin.

How much internet speed do you really need?