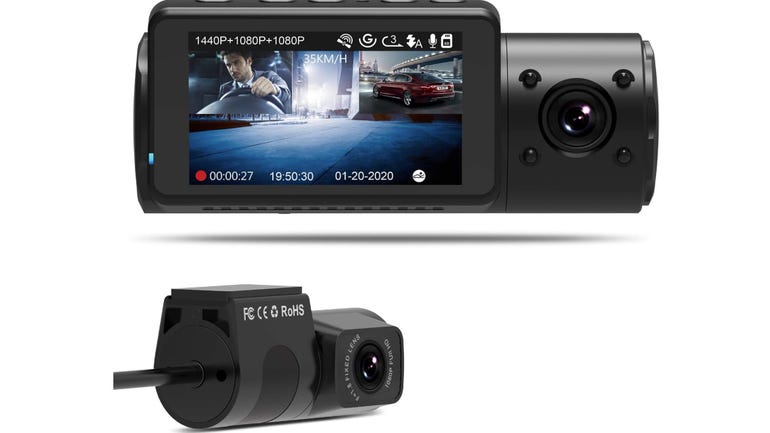 The OnDash N4 dash cam from Vantrue is a nice-looking, unobtrusive camera that records in-car and in-front views in the same compact unit with a rear camera too in the box.

Inside the box, there is the dash cam, suction cup mount, car charging cable, and a USB-Type C cable. There is also a rear camera and a sticky pad to fix the camera to the window. There is a quick start guide as well.  The user manual is comprehensive and well written, with a detailed explanation of all the buttons, ports, and lights on the camera.

The camera does not have a memory card, and Vantrue recommends using memory cards from 32GB to 256GB and formatting it once per month to keep it in good condition and extend its life.

The OnDash N4 is marketed as a three-channel camera that can record front, interior, and rear at the same time using 1440px (front), 1080 px (interior), and 1080px (rear) resolution at 30fps video.

You can also configure the interior and behind the car cameras, or use the front camera on its own. Although, if you have paid almost $260 for the unit, you might as well take advantage of all three cameras supplied.

I also like the fact you can set the camera to record time-lapse images instead of video to create a video montage.

The rear screen is 2.45-inch IPS LCD with easy to use buttons. Once set -- you can forget about the camera -- unless you have driven down bumpy roads. All bumps will be recorded as collisions, locking the video loop. It will not be overwritten if the SD card gets full.

If the camera is hardwired and connects to the car battery, the OnDash N4 will also monitor your car continually until the car battery runs down. It will detect movement in front of the vehicle, and if it detects a collision, it will turn on the camera to record events.

You can configure the loop recording for one, three, or five minutes or switch loop recording off. Other buttons allow you to test the sensitivity, add audio, change collision detection, and motion detection options, and change the resolution for each camera.

You can also toggle GPS settings on or off if you have bought an optional GPS receiver. If you have this, you can track the route, location, and speed.

I love the fact that I can use the camera as a reversing camera for the car -- to see what is behind the car if you have a poor view out of the back window.

The OnDash N4's vision at night is really impressive. The video is clear and number plates are easy to read. During the day, the front and rear views are excellent and there is minimal lensing of the image.

Vantrue says that the camera uses a capacitor instead of lithium batteries, which the company claims will give the camera a longer life span than lithium-ion batteries in other dash cams.. I did not have the opportunity to prove if this was true or not.

I did not have the opportunity to drive too much with this camera, as I tested it during lockdown. But during the limited time I tested this, I was impressed with its features.

For $260, you can get a three-channel camera to watch what is happening both outside -- and inside your car.