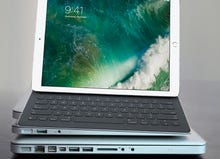 We don't need better Macs. We need more powerful iPads. Cupertino is allowing vertical markets to slip away to their competition in favor of appeasing its dwindling Mac fanbase.

You might not believe Apple's claim that the iPad Pro can replace a PC, but the newest models are bumping up against Apple's own top-specced MacBook Pro in performance benchmark tests.

See also: Mac Pro panic: Why Apple is running scared in the workstation market | Want a fully-loaded iMac Pro? Better sit down | iOS 11 has a big problem, and we're to blame for it

To give a fuller picture of the iPad Pro's generational improvements relative to the MacBook Pro, it also tested the 2015 and 2016 iPad Pro models, and the 2016 MacBook Pro retina 13-inch.

Specs for each device in the tests included:

In the GPU tests the new iPad Pro leads the pack. Both 2017 iPad Pro models come out just ahead of the 2016 and 2017 MacBook Pros in the metal GPU compute test, with scores nearly double 2015 and 2016 iPad Pro models.

None of these results will convince anyone that a locked-down iPad without mouse support can replace a PC. But it is interesting, as Bare Feats notes, that you can get an iPad Pro with some laptop capabilities and comparable performance at a third of the cost of the best MacBook Pro.