Dell's new XPS 13 packs an Intel Core i5 or i7 processor, Intel UHD Graphics, and an UltraSharp 4K Ultra HD InfinityEdge touch display with fingerprint recognition, and is backed up by 19 hours of battery life.
Written by Corinne Reichert, Senior Reporter on Jan. 4, 2018 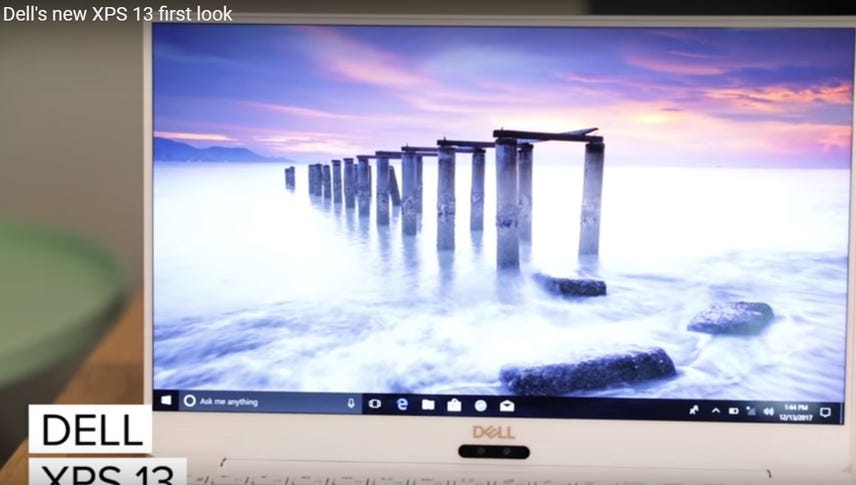 Frank Azor, VP and GM of XPS, Alienware, and Dell Gaming, said the XPS 13 has been improved "in every measure".

"It'll be smaller than the current XPS 13, it'll be thinner than the current XPS 13, it'll be lighter in weight, and unlike a lot of our competitors, who have compromised performance in order to deliver smaller, thinner, lighter products, we're actually going to increase the performance profile of the XPS 13 by as much as 80 percent," Azor told media.

"We didn't compromise on battery life, either ... with the new XPS 13, we will deliver over 19 hours of battery life, even with all that incredible performance in it."

It also comes kitted out with a 52Wh battery; edge-to-edge Corning Gorilla Glass 4; two Thunderbolt 3 ports, one USB-C 3.1 port, and a microSD card reader; an optional Windows Hello-compliant fingerprint reader in the power button; 802.11ac wireless with optional vPro functionality, and Bluetooth 4.1, as well as Miracast capability; an option of LPDDR3 4GB-8GB dual-channel SDRAM at 1866MHz or 16GB dual-channel SDRAM at 2133MHz on-board; and GORE Thermal Insulation to improve performance by moving heat out of the device to keep temperatures down.

Dell also helped invent a new material to produce the laptop in, Azor explained, to meet the market demand for a white finish. According to Azor, Dell wanted to bring the properties of carbon fibre to a white device.

"Because carbon fibre is a black natural material, it is virtually impossible to show you carbon fibre in any other colour than black," Azor said.

"So what we did is we worked with our partners in creating a brand new material called white woven crystalline glass fibre."

2017 was the year that AMD made processors exciting again.

Samsung updates last year's well-received Notebook 9 laptops and adds a 2-in-1 with a bundled S Pen.

Chromebooks and Office 365 together will challenge Windows laptops

With Microsoft porting Office 365 to Chromebooks, a big reason to stick with Windows has gone out the door.

Alienware's Chris Sutphen explains the future of augmented and virtual reality for business, and why the company worked with Microsoft to design the new Dell Visor.

Every department, regardless of size, needs to employ and account for depreciation -- particularly if that department manages assets such as laptops, servers, and production machinery.

A security blogger uncovered what appears to be a keylogger on certain HP laptops. Here are the affected models, and what you can do to fix it.