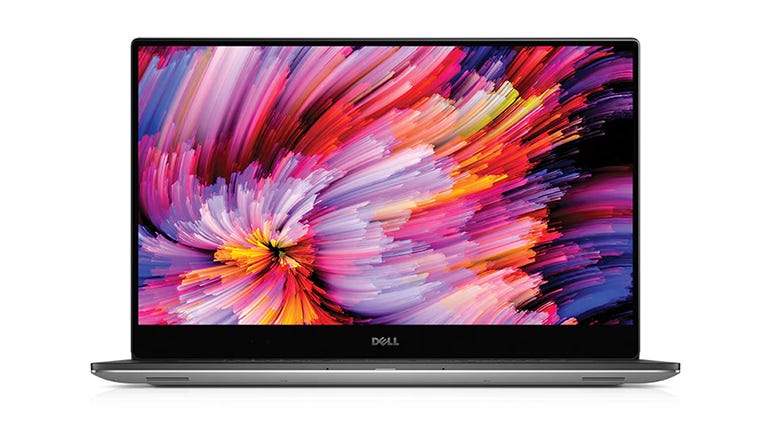 The latest incarnation of the Dell XPS 15 updates the model we reviewed early in 2016. It's the bigger sibling of the XPS 13 that we rated very highly. There are some common elements such as the high-quality build and near edge-to-edge display that allows the 15.6-inch screen to be packed into a relatively compact chassis. In fact, Dell says this is the smallest 15.6-inch laptop around. The availability of UHD (3,840 x 2,160 pixels) screen resolution in some models may entice some buyers, and this was the model I was sent to review.

Anyone looking for a tough, solidly built laptop with a 15-inch screen should put the aluminium-bodied Dell XPS 15 into the mix. The lid is a little thicker than on some other laptops, but I was only able to bend it very slightly in my hands.

There is a little bit of give in the outside centre of the lid, but pressing quite hard did not have any effect on the display itself. This laptop would probably survive in a bag without a protective case. That said, there's every likelihood that the silver aluminium lid and base could get scratched by other bag contents, so aesthetics may demand a case.

There's no give in the carbon-fibre palm rest. The hatched finish to this -- and indeed the entire keyboard surround -- looks attractive and is "cool to the touch" according to Dell. Some heat does dissipate through the keyboard though: this isn't really noticeable in everyday use, but running the flat of my palm across the keyboard I did find the central area slightly warm. It's not a big problem.

All of this attention to solid design does mean the XPS 15 9560 is on the heavy side. It comes in at 2kg with its 97Wh battery, SSD and touch display, or 1.8kg in its 56Wh battery, SSD and non-touch configuration. Whichever option is selected, this is a significant weight to carry around -- especially as you'll also need to find bag space for the sizeable AC adapter.

This is an old-fashioned non-rotating laptop. The screen pushes to an angle of about 120 degrees, and there it stops.

Dell bigs up its InfinityEdge screen, and rightly so. The minimal top and side bezels are just 5.7mm wide, allowing a 15.6-inch screen to be squeezed into a relatively compact chassis. But minimising the upper bezel has a knock-on effect on the camera, which has been relocated to the larger 25mm bottom bezel where it sits off-centre towards the left edge. As I commented in my review of the XPS-13, which has the same arrangement, this is rather awkward to use.

Notably, video calling tends to result in an unflattering 'up-nose' view, that can only be fixed by finding a way to prop the laptop up on something that raises the camera to where it would be were it on the upper bezel. This is likely to be impractical most of the time.

In Dell's defence, it's not the only culprit: Lenovo also uses a narrow upper bezel and locates the camera beneath the screen in its Yoga 910. At least in this case the camera is centrally located. Having used both Dells and the Lenovo for video calling I feel Lenovo's solution makes the best of a bad job, while Dell's off-centre positioning adds insult to injury.

My review sample was a UHD model and the IGZO IPS screen is superb -- bright (350 nits), vibrant and eminently viewable. Dell provides an app, Dell PremierColor, which allows you to select different colour settings. Unfortunately this didn't want to run on my review unit so I couldn't test it, but the idea is sound.

However, going for UHD pushes the price considerably, with the two models straddling the £2,000 mark (see comparison below). These two high-resolution models also come with a 97WHr battery rather than the standard 56WHr unit; this helps with battery life but pushes up system weight.

The keyboard has no flex in it. The keys are well sized, and there's plenty of travel, yet the typing experience is a little lacklustre. There's a lack of spring as the keys bounce back, and somehow the responsiveness is just a shade off. If you don't use different keyboards regularly you probably won't notice, but if you do, or are fussy about keyboards, you might want to give this one a trial run. There are two levels of brightness to the backlight, controlled by a Fn key. The trackpad is large and responsive, and worked without any problems.

There are six pre-configured models on Dell's UK website, mixing and matching core components. All have 7th-generation quad-core Intel processors and discrete Nvidia graphics -- a combination that's rare in mainstream laptops and which gives this system considerable punch.

As usual with Dell laptops you can personalise these configurations, and businesses looking for Windows 10 Pro will need to do this as Home comes as standard. Off-the-page options are: is

Across all models the connectivity options are the same: a full-size HDMI connector; a pair of USB 3.0 ports (one on each side); a USB-C port with Thunderbolt; a 3.5mm headset jack and an SD card reader.

Mains power is provided via a small proprietary round-pin connector. A battery charge indicator shows how much power is left by lighting up to five white LEDs when a button is pressed.

Battery life on my review sample, was reasonable but not outstanding. For example during one period of relatively low-level use -- writing, web browsing and a little streaming -- the battery dropped from 100 percent to 47 percent in five hours.

Screen brightness was left at the preset 40 percent during testing, and this was fine for working indoors. A full day's work should be achievable, although this will depend on how processor-intensive your workloads are and the length of your working day. Opting for the FHD version of this laptop should provide a longer battery life -- especially if you also opt for the higher-capacity battery.

The Dell XPS 15 9560 is a solidly built laptop equipped with a quad-core Core i7 processor and discrete Nvidia graphics. The large, minimal-bezel screen is a pleasure to use and there's a good range of configuration options.

But beware rising costs as you customise components. All of the off-the-page models run Windows 10 Home rather than Pro, for example, and the higher-capacity battery is probably a 'must have' for power users.

If you like Dell's approach but are concerned about this laptop's size and weight you might want to look at the XPS 13, and if you want a fully rotating screen, consider the XPS 13 2-in-1. Whichever model you look at, pay particular attention to the awkward camera position. It might be a deal breaker.