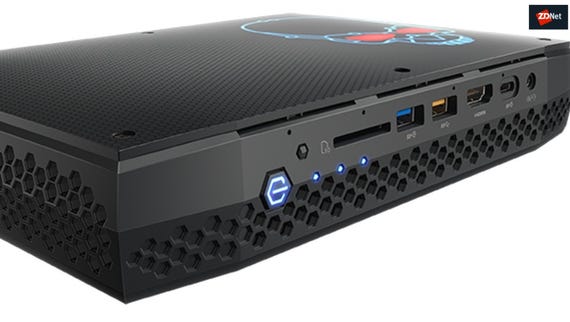 Packing Intel's new 8th-gen core i7 processor with Radeon RX Vega Graphics, the system comes in two versions, the NUC8i7HVK and the NUC8i7HNK.

The NUC8i7HVK comes with Radeon RX Vega M GH graphics and can operate from 1,063MHz to 1,190MHz, which Intel said gives "overclockers the ability to take the system to higher levels". It has an 8th-gen quad-core 100W Intel Core i7-8809G 3.1GHz with 4.2GHz turbo mode, and is "unlocked and VR-capable".

Both NUCs also have dual gigabit Ethernet ports, as well as HDMI ports on the front and back for VR headset plug and play. They can power six monitors concurrently with up to 7.1-multichannel digital audio and quad beam-forming mic array.

"Great for VR enthusiasts and workload-heavy content creators, it will be Intel's smallest premium VR-capable system in the market," Intel said.

Measuring 221x142x39mm, the NUCs will be sold as "bare-bones kits", available around the northern hemisphere's spring.

Intel has combined 4GB of high-bandwidth memory gen 2 with AMD's Radeon RX Vega M Graphics on its 8th-generation core processor, available in core i5 and i7 configurations.

The big consumer electronics show kicks off on January 7 in Las Vegas. Here's a rundown of trends to watch for at CES 2018.