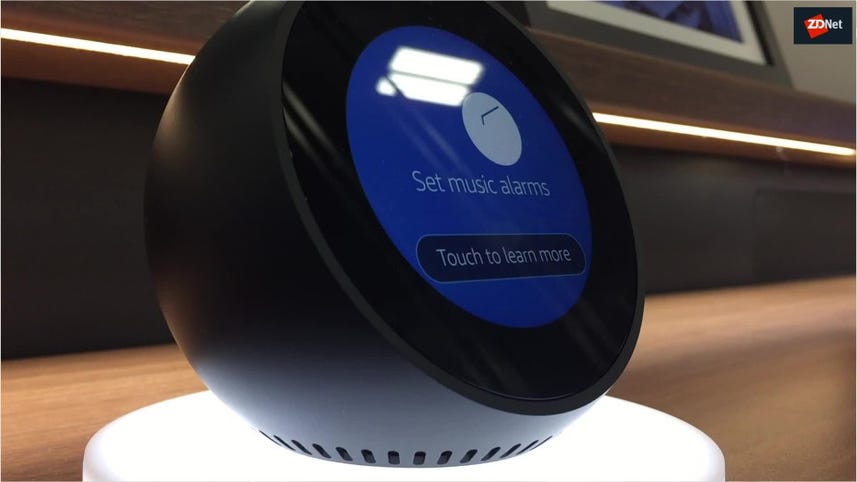 Amazon on Thursday unveiled a slew of new devices that will further incorporate its voice-activated assistant Alexa into people's homes, including a subwoofer, a smart plug and even a microwave. The tech giant is also updating its family of Echo smart speakers, the devices that have helped the e-commerce giant establish an early lead among voice-based interfaces.

At an event at Amazon headquarters in Seattle, David Limp, Amazon's SVP of devices & services, asked reporters to "imagine a future that has thousands of devices in your home." In addition to rolling out several new and updated products, Amazon plans to accomplish that by facilitating more integrations with other product makers and providing new home services.

Amazon's device strategy essentially boils down to Alexa everywhere. Last year, Amazon outlined a bevy of new Echo form factors to expand Alexa's reach. At CES 2017, Alexa was a headliner and embedded into a range of devices.

ZDNet's sister site CNET has a liveblog following all of the details of Amazon's announcements.

Here's a look at what's new:

The Echo Sub pairs with the Echo or Echo Plus to add bass when listening to music. It delivers down-firing, 100W deep bass sound through a 6-inch woofer. When paired with two of the same Echo devices, the Echo Sub enables left/right stereo sound. To set it up, users plug it in, open the Alexa App and wirelessly connect to the Echo devices that control music.

To complement the new Echo Sub, Amazon also announced two more audio products. Called the Echo Link Amp and Echo Link, these are stereo amplifiers with multiple audio in and audio out options. The Link will connect to a receiver or an amplifier, and the Link Amp enables your Echo to play music on your stereo system. It has a built-in 60 watt dual-channel amplifier. The Link devices will be available early next year and support Ethernet and coaxial cables.

They're designed to work with other Echo devices and do not have built-in Alexa themselves.

Users can do things like schedule lights, a coffee machine or appliances to turn on and off automatically. They can also control them remotely. There's no smart home hub required. Users simply plug in the device and use the Alexa App or an Alexa-enabled device to control it. Users can save money by purchasing the Smart Plug in a bundle with select Echo devices.

Next up is the Echo Input, which you can plug it into any existing speaker to turn it into an Echo. It's like an Echo Dot, sans the speaker. It comes with far-field microphones, however. It's designed to plug into or pair with another speaker, adding Alexa to your hone audio equipment.

The device will sell for $35. It is launching later this year and will be bundled with some third-party speakers, including units from Bose. The Echo Input is basically like Google's Chromecast Audio, which plugs into external speakers too, but Amazon's has mics and Alexa.

The Echo Dot is Amazon's most popular voice-controlled speaker -- and the best-selling speaker ever, Limp said: "75,000 five-star reviews back that up." Even so, he said, "The team went back to the drawing board for this one." It now offers improved sound and a new design.

It's 70 percent louder and offers clearer sound. It comes with four far-field microphones, enabling Alexa to hear a user from across the room. While users can connect it to compatible Echo devices in different rooms, they can also connect to other speakers over Bluetooth or with a 3.5 mm audio cable. It's still $49.99 and will ship next month to every nation where Alexa is already available.

The Updated Echo Plus

The new Echo Plus features a premium speaker for 360-degree sound, as well as a built-in Zigbee smart home hub and temperature sensor. It can hear a user from any direction, with seven microphones, beamforming technology and noise cancellation.

Amazon's voice assistant already has a significant presence in consumers' homes, thanks to the robust ecosystem of developers and manufacturers who are incorporating Alexa into their devices. Meanwhile, as voice control and conversational computing takes hold, Alexa is establishing a presence in offices, cars and other spaces.

While Alexa may already seem fairly ubiquitous, her presence is growing quickly: At the IFA tech showcase in Berlin earlier this month, Amazon's smart home VP Daniel Rausch said there are now over 50,000 Alexa skills and 20,000 Alexa-enabled devices. There were only 4,000 such devices at the beginning of the year.

This is a new Echo accessory designed to display timers you've set with Alexa. It has a ring of LEDs around the face for showing your active timers. So, if you start a timer, you'll see one LED to present how long the the timer is set, and if you add a second timer, and you'll see a second LED. It will auto-change the time for Daylight Savings Time, as well.

Amazon didn't mention if it has microphones, so we think it just works with other Alexa-enabled devices. It will cost $29.99 when it launches later this year.

Yes, Amazon made a microwave. It has built-in Alexa and an integrated Dash replenishment service. So, if you need more food to cook, you can order a replenishment with the "built-in Ask Alexa button". You can also control the microwave by voice. In a demo, Amazon said you could say, "Alexa, one potato," and it'll turn on with a time. You can then ask Alexa to add more time to the timer or stop microwaving altogether. If any of this interests you, the device, which will release sometime later this year, costs $59.99.

Amazon built its own microwave because, Limp said, "we dog-food our own APIs."

Amazon is rolling out the Alexa Connect Kit as a simple way for devices to get connected to the Internet and become smart. It starts with a module that has Bluethooth and wi-fi. It's connected to cloud services developers need, such as security, authentication, and configuration. Amazon has offered an early preview to manufacturers including Proctor and Gamble, Media and Hamilton Beach.

Amazon acquired smart security camera company Ring, and as a result, it's announcing a new Ring Stick Up Cam. It is available for pre-order now at Ring.com, Amazon.com, BestBuy.com, and HomeDepot.com for $179.99. To be clear, Ring already has a Stick Up Cam, so this is an update of that product.

We know there are two new versions: Wired and battery-powered. The wired version has an Ethernet port and will be available in black and white. It also works either indoors or outside. Other than that, Amazon was slim on specs and features.

FireTV Recast device can stream shows from an antenna to your home and it is a DVR.

You can watch over-the-air television with it. You just place the box in your home, and you can start streaming on your Echo Show, Echo Spot, Amazon Fire TV, or on mobile. You can watch local news and channels like ABC, The CW, and NBC, and it sends recorded live TV to your Echo Show. It'll handle up four shows at a time, for you to stream on multiple devices. And with Alexa, you can delete or schedule recordings by voice.

FireTV Recast features two tuners and a 500GB DVR. It costs $229.99. Amazon said you can pre-order it now and it will launch later this year. A new feature in the Alexa app will help you decide where to place your antenna for a good signal.

Last, but not least, is an in-car accessory that mounts to your dashboard and lets you integrate Alexa into your car. It comes with the same eight-mic array as the Echo Show, and it can connect to your car through either Bluetooth, Bluetooth LE, or a 3.5mm aux jack. In terms of software, it runs on a new Real Time OS from Amazon, and in terms of connectivity, it uses your phone. Your phone will also display in-car navigation through Google Maps.

The Echo Auto will cost $49.99, after an initial discounted invite price of $24.99. It's expected to start shipping for select invited users sometime later this year.

Expanding its own line of voice assistant-enabled devices will help Amazon accelerate this momentum. It's Amazon's device business, primarily through its family of Amazon Echo smart speakers, that helped it establish dominance in voice-based interactions.

The smart speaker business is still growing quickly -- according to the firm Strategy Analytics, Q2 global shipments of smart speakers reached 11.7 million units, up from just 3.9 million in Q2 2017. Yet the fast-growing market has seen a whole slew of new players grabbing for a piece of the pie, causing Amazon's market share to slip to 41 percent in Q2 2018, down from 76 percent a year prior. Google's Home Mini sold more units in Q2 than any other speaker.

As the smart speaker market grows more competitive, Amazon can look to its other devices to capture a greater share of the overall smart home market -- and to capture consumer attention outside of the home. According to IDC, the worldwide smart home market is expected to be worth $297.5 billion by 2022. Meanwhile, the automotive market is accelerating its efforts to offer connected services in vehicles.

Voices carry, but is business ready for where Alexa will carry us?

The rise of conversational interfaces in our homes has been meteoric. Now Alexa and company are moving rapidly into the business world, and being integrated -- with mixed results -- with AI and other systems to carry out business tasks. How's that going?

Getting started with Alexa and smart home tech for under $100

It's hard to believe how much the price of smart home tech has come down. We show a bunch of ways to save money, including a configuration that will let you control five devices with an Amazon Alexa, all for under a hundred bucks total (including the Echo).

Tablets
The 6 best smart blinds and shades of 2022