The U.S. bookseller Barnes & Noble revealed this morning that its core businesses—from brick-and-mortar stores to its Nook e-reader business—are collapsing.

The last massive entity in a rapidly consolidating industry, the company is engaged in a downward tumble. The question is whether it will slow to a stop or simply roll off a cliff.

The company posted quarterly revenues of $1.3 billion, down 8.5 percent from the same period a year ago. It posted a loss of $87 million, almost twice as much as investors expected.

Its Nook e-reader business, which includes hardware and digital content, logged revenues of just $153 million, down more than 20 percent from the same period a year ago. Hardware sales were down 23 percent and content sales were down almost 16 percent.

Its retail group, which includes brick-and-mortar stores and the company's namesake website, totaled $1 billion in revenue for the quarter, down 9.9 percent from the same time last year.

The bad news comes on the heels of an already tough quarter. Six weeks ago,  its chief executive suddenly resigned . Eight weeks ago, the company decided to abandon its tablet computer business after a consistently weak showing against traditional computing giants such as Apple and Samsung. And two fourth quarter holiday seasons in a row, the company's Nook sales fell far short of its own expectations. 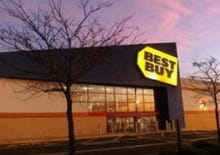 Best Buy: Can stores be asset vs. Amazon?

The conditions for a resurgence are far from hospitable. Despite just 22 percent of the U.S. book market—a certain Jeff Bezos-led company dominates—the company appears to have switched from an all-encompassing strategy of growth to a strategy of damage control.

"We are laser-focused on becoming more efficient and financially sound by managing both our operating expenses and inventory commitment levels," Barnes & Noble president and NOOK media CEO Michael Huseby said during the investors call explaining the company's fiscal results.

That's not to say growth is off the table; rather, that's a signal that B&N is locked in a race to the bottom for a device that has—expectedly—been largely commoditized thanks to Amazon's ruthless price undercutting.

Still, "If we want to be in the content business we need to be in the device business, no matter how they are produced," the company's executives said.

The only silver lining is the content business, for which the company has had some adoption issues.

"We believe that by offering high quality reading devices at lower cost we will be able to drive higher volumes of devices and therefore higher content adoption and revenues," Huseby said.

He added: "We have sold approximately 10,000,000 Nooks and our content activation levels need to better leverage that accomplishment. Therefore, we are implement programs to better serve our existing customer base and also aggressively exploring other target consumer markets with the potential to generate new revenue."

But time is running out; B&N's four-year-old Nook business has burned an estimated $1 billion or more since its inception, threatening to take down a 140-year-old company.

"We have already taken significant steps during the fourth quarter of 2013 to the first quarter of this year to reduce our cost structure in the NOOK segment we will continue our cost management efforts," Huseby acknowleged. "We believe that by implementing these plan actions, which are already underway, we will stabilize our business, drive growth and create value."

Can Barnes & Noble stand up and fight back? It may need to find the bottom first—and hope that its retail revenues hold out.