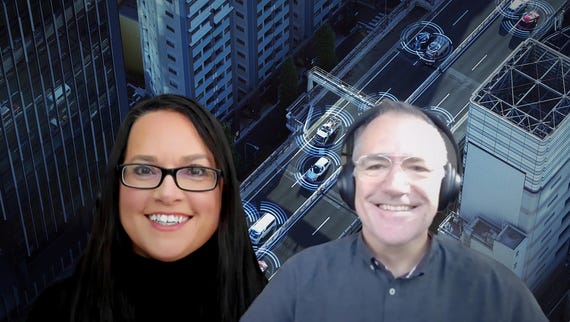 Ford has announced that it is purchasing a new two-legged, two-armed robot produced by Agility Robotics, which the car-maker hopes will soon be walking around neighborhoods carrying parcels from the delivery vehicle right up to your door.

Going by the name of Digit, the five-feet tall humanoid can navigate its way across urban settings ranging from sidewalks to flowerbeds in a surprisingly human-like manner, due to the mobile limbs attached to its upper torso. The uncanny valley effect is fortunately avoided thanks to the robot's lack of a head.

Digit has only just gone on sale, and the reason that Agility can boast Ford as the very first buyer is that the robot provides a solution to the so-called "last 50 feet problem". In the home delivery industry 2.0, those 50 feet are the final steps between the autonomous vehicle carrying a customer's order, and that customer's doorstep.

Ford's interest in making driverless delivery vans and pick-ups is not new. The car-maker has committed to providing autonomous vehicles "for commercial operation" by 2021, and has already teamed up with pizza maker Domino's in Miami to deploy self-driving Fusion Sedans, vans and SUVs to deliver meals.

Digit is designed to fold itself up in the back of the vehicle, pop out of the car trunk when needed, grab packages up to 40 lbs, and work its way to the correct door. But contrary to most delivery robots out there, such as those already deployed by Amazon or FedEx, Agility's humanoid walks on legs, and not wheels.

Ken Washington, the vice president of Ford Research, said: "Gaining access to a customer's door often requires walking through obstacles, including going up stairs and dealing with other challenges, which can be hard for robots with wheels to do."

"Digit has been designed to walk upright without wasting energy, so it has no issue traversing the same types of environment most people do every day."

Teaching a robot to walk like a human is no easy task, even for an Oregon State University spin-out like Agility. In fact, the robotics company has been working on tailoring Digit to Ford's delivery project for several months, in what was announced last May as a "research project" in partnership with the car-maker.

As part of the project, the two companies looked at ways to integrate their technologies, and it emerged that cars and robots did, in fact, have much to learn from each other.

Ford's vehicles, indeed, can provide both data and power. Not only can Digit recharge in the back of the car; the robot can also benefit from the vehicle's knowledge of maps, of the surrounding environment – and therefore, of the best pathway to the customer's front door.

"While Digit needs to function on its own," said Washington, "the desire to keep it lightweight and capable of dynamic movement led to an innovative idea: letting it tap the resources of another robot – one that's equipped with advanced sensors and heavy computing hardware."

And so, should Digit encounter an unexpected obstacle, the robot can send an image via its cameras and LiDAR sensors, back to the vehicle, and let the car configure a solution.

Washington added that the vehicle could even send that information into the cloud and request help from other systems to provide multiple levels of assistance to the robot.

Thinking forward, Ford said that the car could even send Digit-specific information such as where a customer prefers the package to be left or other delivery needs. The two technologies, therefore, would effectively be "talking" to each other.

So far, however, the project is still in its very early days, with Ford having purchased only two of Agility's Digit. The carmaker has not even started commercializing autonomous delivery vehicles yet. So it doesn't look like humanoid delivery men will be walking the streets anytime soon.