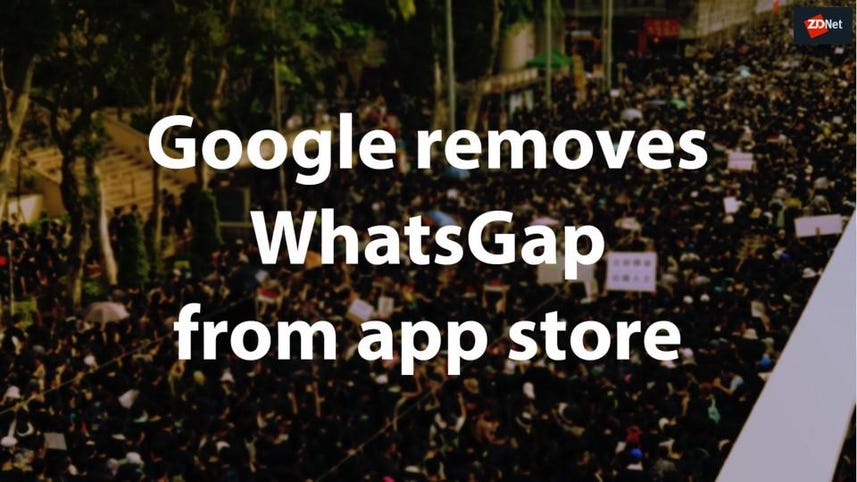 WhatsGap is an app used to identify retailers that are in support of Hong Kong's democracy.

Google told ZDNet the removal of WhatsGap was sparked by "sensitive content" that was being published on the app.

"We have a long-standing policy prohibiting apps that lack reasonable sensitivity towards or capitalise on serious ongoing conflicts or tragedies," a Google spokesperson told ZDNet.

"After careful review, we found this app to be violating that particular policy and suspended it, as we have done with similar attempts to profit from other high-profile events such as earthquakes, crises, suicides and conflicts."

But unlike Apple, which pulled HKmap.live from its app store last October, WhatsGap can be reinstalled on Android.

Google now joins Apple, Blizzard, and the National Basketball Association (NBA) -- all of which have bowed down to growing pressure from China.

Blizzard, which is part-owned by Chinese giant Tencent, took back its prize money and suspended Heartstone player Chung "Blitzchung" Ng Wai after he expressed support for Hong Kong.

The NBA meanwhile, previously found itself in hot water with China after the general manager of the Houston Rockets, Daryl Morey, tweeted his support for the Hong Kong protests.

In retaliation, the league's preseason games were not shown in the Middle Kingdom.

Must read: 'Don't be evil': Has Google forgotten its original motto? (TechRepublic)

Google's decision to remove WhatsGap from its app store is a backflip on the company's 2010 decision to stand up to the Chinese government, which included not censoring search results in China.

In November, nearly 300 Google employees called for the company to abandon its efforts to create a censored Chinese search engine dubbed Dragonfly.

In the open letter, the group said creating Dragonfly would set a dangerous precedent that would make it harder for Google to not build similar functionality in other countries.

In the event of Google returning to China, Baidu founder Robin Li said in August that he was confident his company would beat Google if it ever reentered the market.

"If Google decides to return to China, we will take the chance to have a real fight, and we will win it again," Li said.

Mobility
How to become a mobile app developer