Full Bio
Posted in Between the Lines on January 11, 2021 | Topic: Quantum Computing 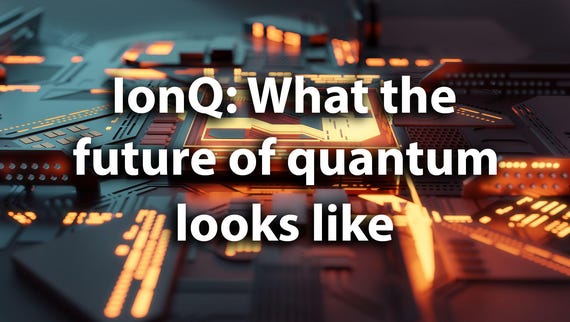 IonQ has a plan to commercialize quantum computing and Peter Chapman is CEO expected to make it happen.

Chapman, son of a NASA astronaut, started working in the MIT AI Lab when he was 16, invented the first sound card for the IBM PC, wrote software for the FAA and led a Ray Kurzweil company to build tools for the blind.

Simply put, Chapman has been ahead of the technology curve. Chapman joined IonQ in the summer of 2018 because he is betting that quantum computing can achieve Artificial General Intelligence (AGI).

IonQ recently made news for its roadmap and proposing a new performance metric called Algorithmic Qubit.

The company counted NEA as an initial venture investor after the firm's principals read a scientific paper by co-founders Chris Monroe and Jungsang Kim, professors at University of Maryland and Duke, respectively. "Usually someone has an idea and you go chase them for money. This was just the opposite," explained Chapman. "The paper was the blueprint on basically all the building blocks necessary to build a quantum computer and so they said, 'Okay, let's go do this.' And that's how it got started."

Here are a few highlights from my conversation with Chapman on the future of quantum computing.

Cloud really did two things for us. One is it made it if you have $10 on a credit card, you can sign up for either an AWS account or an Azure account, and you can actually get onto one of IonQ's computers and you can start running quantum programs. And kind of like the computer business, in the future as people create applications, it could be large corporations that do it, or it could be some kid in a garage who comes up with kind of the quantum version of the spreadsheet. So we wanted to enable a wide developer audience.

Chapman added that the cloud also forced IonQ to focus on uptime. IonQ took about 14 months to put its systems online and service jobs with high uptime.

When I first joined IonQ which is less than two years ago, people were saying quantum computers would never work. Here we are 18 months later and they're now available out on the cloud and anyone can use them. I think bringing them to the cloud has really changed the narrative for a lot of doubters, and now we're getting to a point where people are starting to realize it's actually here. It actually works.

Indeed, the cloud is enabling a bevy of quantum computing efforts from around the tech sector. There are a bevy of players including Google, IBM and its System Q, Microsoft, Intel, AWS and others chasing commercialization in some form.

Algorithmic volume as a quantum computing benchmark. IonQ recently proposed algorithm  qubits as a replacement for the quantum volume benchmark created by IBM. The argument is that quantum volume is going to get so large that it will become useless as a metric. Chapman said:

It's intending to get a benchmark which actually is meaningful to application developers. If I tell you a quantum volume of 4.2 million, which is the quantum volume for our latest 32 Qubit system, that doesn't tell you much, but at the same time that actually, if you took the log base two of it, it's actually 22 usable Qubits, and that's kind of more interesting. It's like, okay, now I know kind of how many Qubits I can use for your average application. Now there's probably applications where it would need 22 would not work. And there's probably applications where more than 22. It means 22 out of the 32 Qubits, there's enough fidelity for you to create a quantum program and expect it to work.

Applications are coming. Chapman said he has been surprised to see useful applications running on IonQ systems. He said:

It's actually surprised me in this past year to see actual useful applications running on even our 11 Qubit machine. People are doing really interesting work where they're starting to challenge classical computers for handwriting generation, on classification, and of early machine learning models on early chemistry simulations. But those are all still early examples of it. We think that in the... you need probably 40 Qubits or so to get to a point where you start to do things that you would rather do it on a quantum computer than on the cloud or on a supercomputer. At about 72 Qubits, and we're talking about algorithmic Qubits, these useful Qubits, then you get to a place where you probably start to take on supercomputers for certain tasks. And then you need to get into thousands of Qubits to get to a point where you can start to really do really interesting things. Things like drug discovery and those kinds of things.

Developer skills. Chapman said there will be a lot of libraries and abstractions for quantum computing that will court today's developer. There will also be developers that know the hardware as well as software. So you think you want to study quantum computing? | Quantum computing now is a bit like SQL was in the late 80s: Wild and wooly and full of promise

I think in some cases you will see probably even in this year coming where somebody stands up in endpoint that maybe does for instance, handwriting recognition or natural language processing, and they use a library that does the quantum part for you and you as an end developer.

It would available in standard Java and C# and standard programming languages. I think many people will get to from that point of view, but then there's the people that want to create those endpoints. And that definitely you're going to need some quantum programming skills. And luckily there's lots of books and university classes. There's a lot of push into education right now.

We want to get down to the assembly language of the processor. The question is that a skill set that you want to add to your toolkit, or are you just going to wait for a higher level abstraction layer to appear? There'll people that'll dive deep at that, but many people just like today who will wait for a library to come about that allows them to use quantum computer.

For seven years I worked for Ray Kurzweil, and that was all about predicting the future and when the technology would come into play, and when was the right time to take advantage of it. And that gave me good training for thinking about quantum.

People don't realize how quickly quantum is coming, and quantum is likely to change the world. As much as the microprocessor did, quantum is likely to have that kind of impact on mankind. Just like the early days of the computer business, those who saw that vision did very well. And so I think we're in that same kind of stage today for quantum.