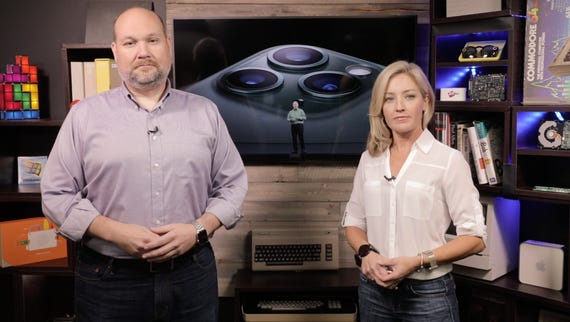 Do you know what got my spidey-sense tingling? Apple didn't discuss storage and pricing tiers for its new iPhone Pro models.

Or, it could be that Apple wants to change the narrative away from Pro pricing to the pricing of the new $699 entry-level iPhone 11. Frankly, that would be the smart move. I'll talk about base-model vs. pro in a minute, but first, let's cover what the Apple website says about the new model prices.

Here's a pricing chart that shows all the new models and their capacity vs. price:

I often think about how I would describe a new tech gadget to a neighbor. If I can say something that could elicit a wow, then we've got something generally exciting. If eyes glaze over, not so much.

Let's look at how I could have described the original 2007 iPhone. "It combines a phone and an iPod." For the time, that was undoubtedly a "Wow."

Or, let's look at 2008's iPhone 3G. "You can now download apps, mini-programs to make your phone do anything. Many are free or really inexpensive, and you don't even have to know how to install software." The App Store revolutionized pretty much everything, so that's an uber-Wow. Uber was an app that became a billion-dollar business, just because of the app ecosystem.

We could explain 2010's iPhone 4 as, "It adds a Retina display, which makes everything look better. Plus, there's a front-facing camera that will launch the world of selfies. Oh, you don't know what a selfie is? Just wait..."

The 2011 iPhone 4S added Siri, which was revolutionary for the time. The 2012 iPhone 5 added LTE, which allowed surfing at near broadband speeds and increased the size of the iPhone screen. The 2013 iPhone 5S and 5C added Touch ID, so you no longer needed to enter passcodes. Plus the iPhone 5C was cheaper, with some wacky colors. Everyone loves wacky colors.

The last big, easily explained iPhone innovation came in 2014 with the iPhone 6 and 6 Plus. Here, Apple unveiled two iPhones, including one with a much larger, phablet-sized display.

Also: My four-year-old iPhone 6s Plus is too good to upgrade, and that should worry Apple

Can you see how each new generation made a big step forward? Each of these phones added features that could be explained to a neighbor easily, without a "yada yada yada" attached.

Explaining the 2016 iPhone 7 and 7 Plus wasn't very exciting. Yes, there were two cameras, allowing for Portrait mode. But otherwise, the big notable was that Apple began its process of taking away features. No longer would iPhone users be allowed to have a headphone jack.

2017 was confusing at best. Apple introduced both the iPhone 8 and iPhone X. The iPhone 8 was the iPhone 7 with a bit faster processor and a slightly better camera. Oh, and it finally caught up with Android by adding wireless charging. The iPhone X was definitely a significant change with a full-screen display, but it took away the Home button, which also meant Touch ID was gone. And it was ungodly expensive.

I have not once been able to explain last year's 2018 models without watching eyes glaze over. The XS is a bit faster with a better camera. We've heard that each year for years. The only exciting factor was XR, which allowed for more wacky colors and a somewhat lower price. But, compared even to my 2015 iPhone 6s Plus, the screen resolution went down.

That brings us to this year's models, collectively the iPhone 11 series. Here, Apple finally wised up in its product naming conventions. Rather than giving the lowest end model some cheap seats designation, like 5C or XR, Apple designated the lowest cost new iPhone as simply the iPhone 11. This will make for some easier price comparisons to some of its competitors.

Apple also added a Pro designation to the higher-end cameras. You can now get an iPhone 11 Pro and iPhone 11 Pro Max. This allows Apple to reach out to the more serious buyer and let them decide if they're pro or not, rather than feel like they're just not worthy of owning a mainstream iPhone.

It's a subtle name change, but it's smart.

That said, what do the new iPhones offer? Well, a faster chip and a better camera. This is the same story we've heard (and had to tell) for years. Yes, there's a wide and wider camera on the iPhone 11. And yes, the Pro cameras add a telephoto lens. But really, it's just a slightly better camera. Oh, and you can now take slow-motion selfies or "slofies." Yeah. Okay then.

There's no doubt that the base iPhone 11 is much more in line with consumer buying desires than the higher-end models.

Even so, my buddy Jason Perlow points out that you can get a quality budget Android phone for as low as $249. You can get an Android phone at just about every price point you might want, which is why there's so much strong appeal to consumers.

At the high end is the Galaxy Note 10, which starts at $949 and, in its Plus-size incarnation, can go up to $1,399. Even though the Note adds a pen, the ability to use a Micro-SD card, and even 5G, it's still a hundred bucks less expensive at the max than the iPhone 11 Pro Max.

I like my iPhone and, as Jason points out, next year I'll probably have to update my vintage 6s Plus when it's no longer supported by iOS. When that happens, overpriced or not, I'll probably upgrade to the iPhone 12 Pro Max Extreme, or whatever it's called. I like the Apple ecosystem, I'm pretty heavily invested in it, and while I love tinkering with Android, staying Apple is good for my basic productivity.

But the fact is, Apple has become an also-ran offering. Its fit and finish and software offering is mostly excellent (except when it's not). But the company that undeniably revolutionized computing and mobile phones isn't doing anything revolutionary anymore. Yes, it's better than last year's model, but that's not exciting or even compelling.

The iPhone 11 fails my explain-to-neighbor test. All you can really say is it's the newest model, just a little faster with a slightly better camera. Yawn.

Wake me when Google announces the Pixel 4.