Every iPhone 12 model from mini to Pro Max: Prices, specs, and availability

Apple's iPhone 12 lineup is packed full of features and new capabilities, at a range of price points. Here's everything you need to know before you place an order.
Written by Jason Cipriani, Contributing Writer on Oct. 14, 2020 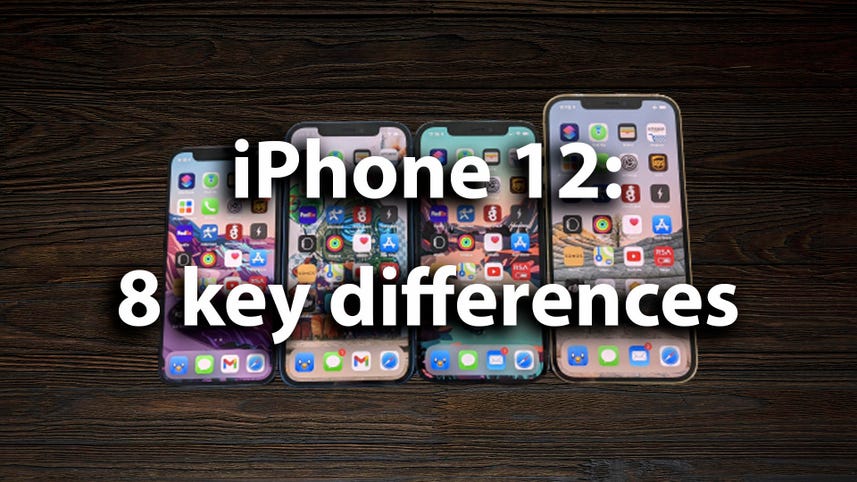 The iPhone 12 lineup is here. Well, almost here, but it's finally official. After months of rumors and speculation about what Apple would and wouldn't include in its latest iPhones models, the company announced four iPhone 12 models on Tuesday.

This year's announcement is about a month later than Apple's typical Sept. launch cycle for iPhones, but this year's crop was delayed due to the pandemic Apple still held its annual September event where the company announced new Apple Watch and iPad models, but no iPhone.

Below is everything you need to know about Apple's iPhone 12 models.

How many models are they and what will they be called?

This is the first time Apple has announced four new iPhone models at one event. This year, Apple will begin to sell the iPhone 12 Mini, iPhone 12, iPhone 12 Pro and iPhone 12 Pro Max. The four models span across several different price points and offer various features.

What will the iPhone 12 lineup cost?

With four models this year, you can pick a new iPhone that fits your budget, with prices ranging from $699 to $1,099. Here's the starting price for each new iPhone 12 model:

When can I order the iPhone 12 model I want?

As previously mentioned, Apple is doing a staggered release this year. Here's how it breaks down:

The new iPhone models have moved away from the rounded edges used on the iPhone 11 and go back to the iPhone 5 and iPad Pro-like flat-edged design. The back of the phones will look familiar, with the Pro models having three cameras along with a LIDAR sensor for 3D scanning. The standard iPhone 12 models will have two cameras.

The notch where the Face ID sensor array, also referred to as the True Depth Camera, appears smaller, with Apple shrinking down the overall size of the notch that cuts into the top of the iPhone's display.

The standard iPhone 12 models will continue to use an aluminum housing, and the Pro models will stick with a stainless-steel housing.

As for colors, the iPhone 12 Mini and iPhone 12 will come in black, white, red, blue and green. The Pro models will come in gold, silver, graphite and blue.

All four iPhone 12 models are capable of connecting to 5G networks. In the US, that means they include Sub6 and mmWave compatibility. The phones will have a Smart Data Mode that will decide whether or not a 5G connection is required for a task, and when it's not, it will use a 4G LTE connection instead. Doing so will save battery life.

Specs, features and differences between the iPhone 12 models

As previously discussed, Apple made the switch from LCD panels in the base iPhone 12 models, to using OLED panels across the entire line this year. The OLED displays are brighter, have better color contrast and deeper blacks, and all things considered, are a big upgrade for the less expensive models.

As for camera updates, Apple has brought Night Mode to every lens on the iPhone 12, including the ultra-wide and front-facing cameras. Night mode time-lapse is also making its debut with the iPhone 12.

With the iPhone 12 Pro, Apple has added Deep Fusion to all the cameras on the phone. There's still a wide, ultra-wide and telephoto. But the iPhone 12 Pro Max has new sensors throughout the camera array. The new telephoto camera is 65mm (instead of 52mm), with 2.5x optical zoom, and the standard wide camera also saw similar improvements.

Apple ProRAW will launch on the iPhone 12 Pro and 12 Pro Max later this year. It allows users to still take advantage of Apple's image processor but provides the RAW file for users to manipulate and edit.

As for video, the iPhone 12 Pro will get HDR video and Dolby Vision HDR, a first for any phone according to Apple, at 4K resolution and up to 60fps.

Finally, the new LIDAR sensor that Apple uses in the current iPad Pro lineup is now found in the iPhone 12 Pro and Pro Max. Using the camera array and new sensor, Apple and developers will be able to create improved augmented reality applications, thanks to the 3D scanning technology the camera brings to the line. The LiDAR also improves the camera experience, with faster focusing even in low light situtaions.

There was a lot of speculation off and on that the iPhone 12 Pro would feature 120Hz ProMotion display technology, but it didn't happen due to concerns about battery life.

The iPhone 12 still has wireless charging, but Apple is including a new MagSafe feature that uses magnets to hold the wireless charger in place, ensuring proper lineup of the Qi coils. The iPhone 12 will charge at up to 15W, which is double the previous speed of 7.5W.