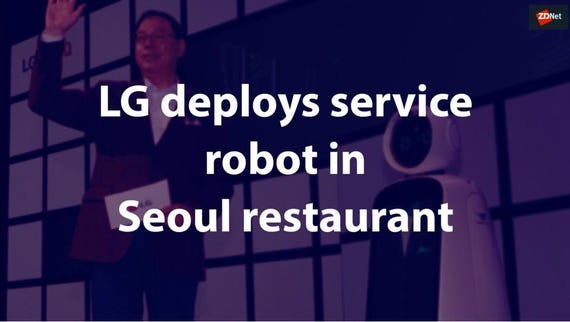 LG Electronics has deployed a service robot that carries food to tables in a restaurant in Seoul, the company has announced.

LG's Cloi ServeBot can carry and deliver up to four food trays to customers autonomously while avoiding obstacles.

It can also return to collect trays and bring them back to the kitchen after customers have finished their meals.

The Cloi ServeBot also shows various facial expressions on its screen while serving customers and excuses itself when passing by people or obstacles. It will play music on the move to alert people of its presence.

LG said the robot is useful for carrying foods that are too hot or when people have to load heavy trays.

The first unit is operating at CJ Foodville's Cheiljemyunso restaurant, a noodle franchise, in downtown Seoul.

LG and CJ have been collaborating since April last year to develop robots for various applications in restaurants.

In November, they deployed a noodle-making robot at CJ's separate buffet chain. In the same month, it also launched care-giving robots to Seoul National University Hospital to assist in the care of children in intensive units.

LG said it is also developing robots for industrial and home use going forward.

Embattled mobile business continues to be in the red despite restructuring efforts.

The South Korean display panel maker suffered an operating loss of 1.36 trillion won for the full year of 2019.

While LG continues to grow in the automotive sector, it's also eyeing expansion plans in the commercial space.

KT's N bot can get on elevators on its own to deliver goods to guests at their rooms.

Commentary: The Robot Operating System (ROS) doesn't get a lot of press, but it increasingly powers the robots upon which industrial automation and other functions depend.