They are combining AWS' cloud and its capabilities in machine learning and artificial intelligence with NFL data to improve player health and safety.
Written by Asha Barbaschow and  Stephanie Condon, Senior Writer on Dec. 5, 2019 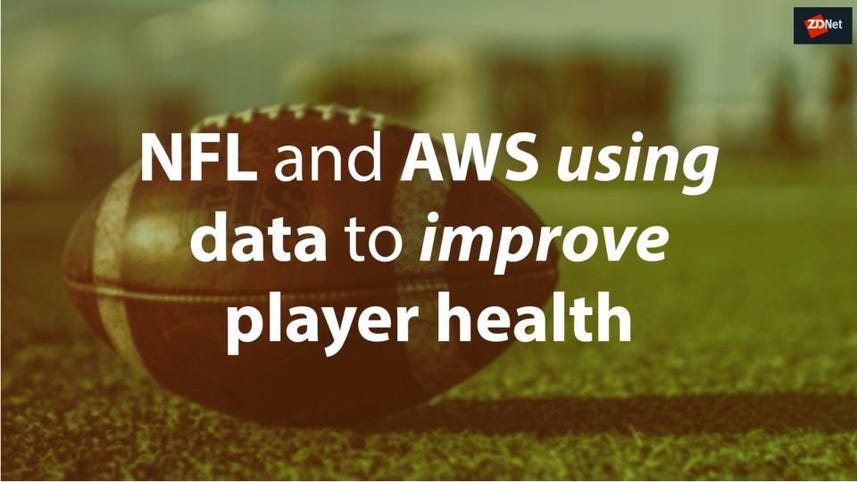 Amazon Web Services (AWS) and the National Football League (NFL) have teamed up in a bid to advance player health and safety, combining the NFL's data with the former's capabilities in cloud and specifically artificial intelligence (AI) and machine learning (ML).

According to Goodell, taking the data the NFL has collected over the last decade, pulled from the likes of sensors and game footage, and combining it with the technology available from AWS, the future of football can be re-imagined.

"When you take the combination of that the possibilities are enormous," he said. "We want to use the data to change the game. There are very few relationships we get involved with where the partner and the NFL can change the game.

"When we apply next-generation technology to advance player health and safety, everyone wins -- from players to clubs to fans."

Goodell said it's important to use technology to make an impact, and he said the NFL now has the potential to do something very powerful. This includes predicting injury scenarios in order to develop a means to prevent, diagnose, and treat injuries.

"The outcomes of our collaboration with AWS -- and what we will learn about the human body and how injuries happen -- could reach far beyond football. As we look ahead to our next 100 seasons, we're proud to partner with AWS in that endeavor," he said.

"I am never happy or satisfied where we are, the NFL in particular has so much more potential and I think that's what this partnership can do."

As part of this announcement, AWS and the NFL will co-develop the Digital Athlete platform, a computer simulation model of an NFL player that will be able to be used to model scenarios within the game environment.

"It is hard to overstate the potential of a digital twin, especially when you're applying that to people," AWS VP of AI Matt Wood said.

AWS and the NFL will also develop computer vision models using Amazon SageMaker, Amazon SageMaker Ground Truth, and Amazon Rekognition to advance the ability to detect concussions and identify the forces that cause them.

The announcement builds on the Next Gen Stats partnership the pair kicked off back in 2017.

Touching on the existing relationship, Goodell said it's about trying to bring the fan closer to the game, and give them some other way to engage.

"The fans have really taken to that and our broadcasters, our media partners have been really interested in how you take this new data and make it a better production," he said.

The Next Gen Stats platform provides real-time location data, speed, and acceleration for every player during every play on every inch of the field, Goodell explained.

The platform has seen innovations in advanced stats, such as Completion Probability and Expected Yards After Catch.

Excited to watch football? NFL+ is offering a free trial and 50% off deal

Excited to watch football? NFL+ is offering a free trial and 50% off deal