Robots threaten middle-aged workers the most (that's anyone over 21) 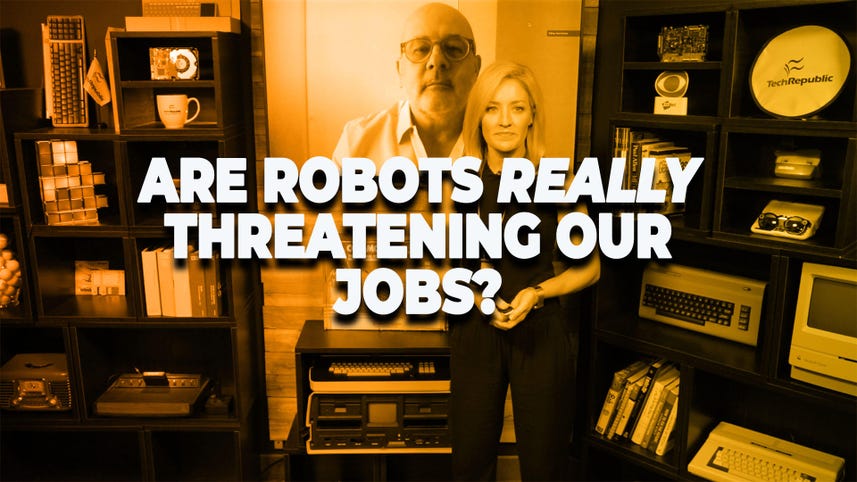 It's something many people joke about. Gallows humor, they call it.

"A robot will do my job soon," they say, as they toil in their factory or lawyer's office.

For many, it's hard to imagine what they might do next, except, in a fanciful thought, train as a mechanic fixing robots.

Yet the more optimistic sorts claim that automation will bring new jobs, new ways and new opportunities to improve life for all.

I was a little downcast, therefore, to read three recent papers by two influential economists, Daron Acemoglu of MIT and Pascual Restrepo of Boston University.

Each casts severe doubt that robots and their powerful brains will do anything other than squish human potential.

Here are some words from their paper entitled "Demographics and Automation": "We argue theoretically and document empirically that aging leads to greater (industrial) automation, and in particular, to more intensive use and development of robots. Using US data, we document that robots substitute for middle-aged workers."

I can imagine one or two middle-aged readers shivering. I can imagine younger readers reassessing their futures when they hear that Acemoglu and Restrepo define middle-aged workers as those between 21 and 55.

You might think you're 22, kid. As a worker, you're middle-aged.

Hello there, people of Germany, Japan and South Korea. I hope you have fine retirement plans.

"Demographic factors alone account for close to a half of the cross-country variation in the adoption of robots and other automation technologies," say the large brains.

This does, of course, make some sense. If you can't find the workers, you buy the robots.

I wanted to feel optimistic, even for those middle-aged 21-year-olds.

So I turned to another of the economists' recent papers, "Automation and New Tasks. How Technology Displaces and Reinstates Labor."

The short answer: Not well.

Some might say that at Facebook, it should have. For example, by creating the need for hundreds of thousands of humans to prevent Facebook from becoming the putrid, festering mess it is now.

Instead, what the economists find is that "the recent stagnation of labor demand is explained by an acceleration of automation, particularly in manufacturing, and a deceleration in the creation of new tasks. In addition, and perhaps reflecting this shift in the composition of technological advances, the economy also experienced a marked slowdown in productivity growth, contributing to sluggish labor demand."

They're at pains to point out they're not suggesting the end of human work. They worry, though, about the prevailing trends: "If the origin of productivity growth in the future continues to be automation, the relative standing of labor, together with the task content of production, will decline."

Those involved in labor will become, in essence, ever less powerful and ever more disposable.

I had one last shot. I turned to their final paper, "The Wrong Kind of AI? Artificial Intelligence and the Future of Labor Demand."

At first, they're polite: "Recent technological change has been biased towards automation, with insufficient focus on creating new tasks where labor can be productively employed."

Why bother creating AI that gives humans new and more interesting things to do when you can eliminate the cost base formerly known as the employee?

Acemoglu and Restrepo see the results of this myopia in stark, dark terms: "The consequences of this choice have been stagnating labor demand, declining labor share in national income, rising inequality and lower productivity growth."

Oh, and wonderful stock payouts to a few founders and their friends.

I sense an imploring tone in the academics' words: "The current tendency is to develop AI in the direction of further automation, but this might mean missing out on the promise of the 'right' kind of AI with better economic and social outcome."

Here we have the weakness of the tech world's ways.

It moves fast. It breaks things. It breaks people. And what's left looks remarkably like a social wasteland.

Too many times, the tech world has been unwilling and incapable of pausing to consider the social implications of what it's creating.

"The considerable promise of AI implies that we need to devote care and serious thought to its implications and to the question of how best to develop this promising technology platform," say Acemoglu and Restrepo.

And yes, the last line of their paper reads: "Before it is too late."

Sit with your thoughts, not your devices

Sit with your thoughts, not your devices