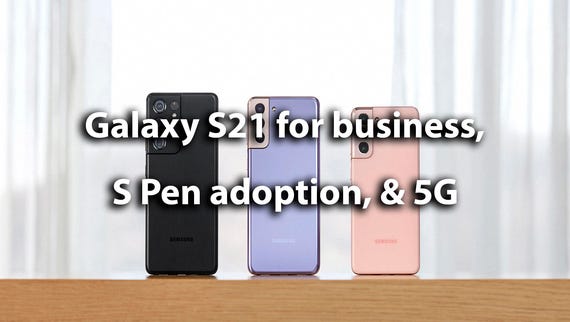 The best Samsung phones Samsung offers a range of smartphones -- with the A-series, S-series, Note line, and new foldables.

The 5G devices will be available for preorder January 14 with January 29 availability. Samsung moved forward its Unpacked event and appears to be setting a product cadence that may or may not include the Galaxy Note and makes room for foldable devices.

Samsung is clearly sticking to the premium flagship market with the Galaxy S21 Ultra yet acknowledging the success of the Galaxy S20 FE, which was a mid-market phone with key features from the premium lineup.

TM Roh, head of Samsung's mobile communications business, said the Galaxy S21 lineup recognizes "the importance of choice" and "freedom to choose the best device for your style and needs." Indeed, Samsung's Galaxy S21 Ultra covers the premium category and the base Galaxy S21 can extend to the high-end of the midmarket.

Judging from a talk from Samsung's Stephen Hawke, director of mobile product manager, the consumer electronics giant put most of its effort on the Galaxy S21's camera systems as well as display and battery life. The Galaxy S21 lineup runs on Qualcomm's Snapdragon 880 processor in the US.

What's most notable about the Galaxy S21 Ultra is S Pen compatibility. The catch is that S Pen doesn't have a built-in dock like the Galaxy Note. With the design choice, the S Pen is becoming more of an accessory instead of an ingredient like it is for the Note. Samsung said that it will have two S Pen models with the base S Pen and S Pen Pro to be launched later. Samsung also said it is working with pen makers to expand S Pen technology and reach.

Historically speaking, Samsung's premium devices sell well initially and then the lower-priced options pick up the slack. The Galaxy S21 Ultra could ultimately replace the Note in the lineup.

Samsung also is launching Galaxy Buds Pro for $199 to go with the Galaxy S21 line. From a business perspective, Samsung is positioning the lineup as a key collaboration tool that can provide seamless experiences between devices, video conferencing and calls.

With the focus on camera improvements for the Galaxy 21 line and new design, Samsung is targeting consumer content creators as well as remote workers. The company also said that it improved the Galaxy S21 Ultra's 100x zoom with more stability.

While Samsung has emphasized the Galaxy S21 uses for everything from photography to social media and vlogging, the company also noted business use cases.

Robert Escalle, head of product for Samsung Mobile B2B, said Galaxy S21 devices can bring the "office wherever you are" and be used for everything from professional photos for realtors as well as training for workers in manufacturing and on-the-fly data analysis.

Samsung Galaxy S21 will also sync reminders to Microsoft Outlook and Teams. The S Pen can add more use cases for the Galaxy S21 Ultra, but there won't be all the features available in the Galaxy Note at launch. All air gestures for the S Pen will be supported at some point, said Escalle.

What remains to be seen is how Samsung builds out industry-specific apps for the Galaxy S21 ecosystem. The company has focused heavily on industries as well as rugged devices.

Preorders for Galaxy S21 includes a $100 credit for preorders with the Galaxy S21 Plus has a $150 credit with Galaxy S21 Ultra carrying a $200 credit. All preorders also include a free Galaxy SmartTag.