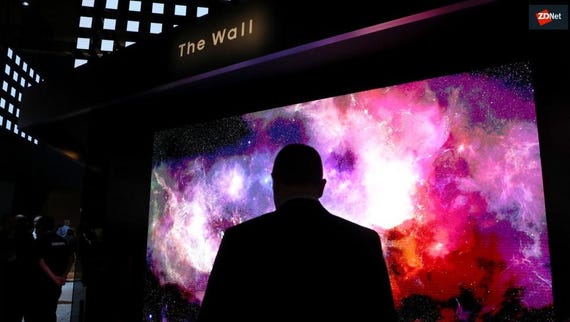 Samsung Electronics said on Thursday that it will commercially launch a 110-inch MicroLED TV aimed at the home market starting early next year.

Pre-orders will begin at the end of December, with official sales to begin in the first quarter of 2021.

Samsung did not announce the pricing for other markets. Markets such as US and Europe that are showing high-interest in the model will also have it available starting in the first quarter, the company said.

He stressed that Samsung was well positioned to begin mass producing MicroLED TVs and that prices would go down as more companies produce TVs with the technology and an ecosystem is formed.

Samsung executives at the conference added that they were reviewing when MicroLED TVs smaller than 110-inches would hit the market, saying the company would share more details at the upcoming CES 2021.

The South Korean tech company first unveiled its MicroLED display in 2018 with a model called "The Wall". The company has since launched the TV in modular form to target the enterprise market.

MicroLED displays use individual micrometre-sized LED modules as pixels. Much like OLED, they don't require a backlight and emit light on their own to provide superior contrast ratios, colour gamuts, and viewing angles compared to conventional LCD TVs. MicroLEDs also do not require colour filters and use inorganic materials, unlike OLED which uses organic materials and requires a colour filter.

Samsung claimed its MicroLED TV has a lifespan up to 100,000 hours, or over a decade. They can also express 100% of the DCI and Adobe RGB colour gamut, the company said.

The 110-inch MicroLED TV has a 99.99% screen-to-body ratio and is completely bezel-less, the company said. It has 8 million pixels, Samsung's Micro AI Processor that delivers 4K HDR contents, and a split-screen feature that can split the screen to up to four 55-inch screens to view four sources of content at once. It also has an embedded sound system that offers 5.1 channel sound without needing external speakers.

On other TVs launching next year, executive vice president Jongsuk Choo, who also attended the conference, confirmed that the company would be launching a new MiniLED TV as part of its QLED brand of LCD TVs next year. However, MicroLED TV will be positioned as a higher-tier product than the MiniLED TV, the executive said.

MiniLED TVs are a completely different and less sophisticated technology than MicroLED -- it is a LCD TV where the backlight is comprised of micrometre-sized LED chips.

Join Discussion for: Samsung to start sales of 110-inch MicroLED...