Samsung really wants you to give foldables a try and with an aggressive price point for the Galaxy Z Flip 3 5G it may get what it wants--the mainstreaming of foldable devices.
Written by Larry Dignan, Contributor on Aug. 11, 2021 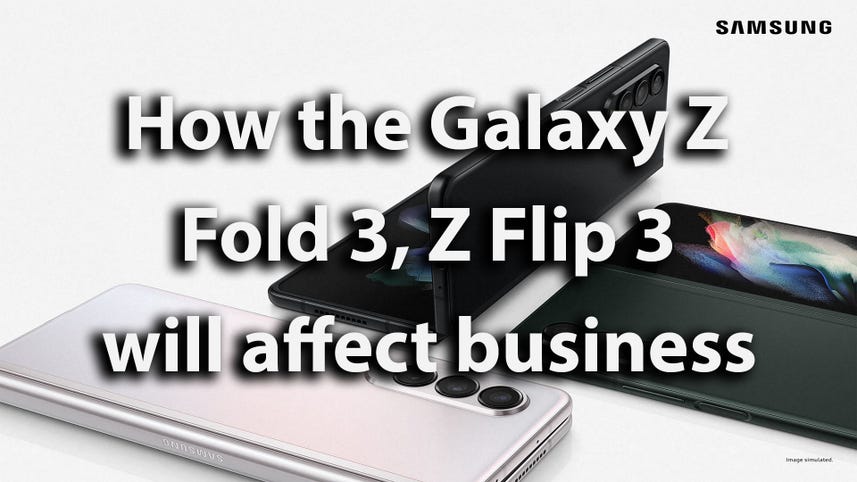 Now that's a starting price, but once you consider wireless carrier promotions and the real cost may be lower.

At its Unpacked event, Samsung's rolled out its portfolio update including the Galaxy Z Fold 3, a productivity powerhouse, that has a lower price than its predecessor but remains out of reach starting at $1799.99. Overall, Samsung's launch of its Galaxy Watch 4 and foldable devices equates to a flagship and value message.

But the real innovation is getting the Galaxy Z Flip 3 below the $1000 mark.

Now the Galaxy Z Flip 3 will start at $999.99 for the 128GB version. Suddenly, Cover Screen tricks, a smaller footprint, and a quirky design for some look more appealing. Bryan Choi, head of strategic marketing of mobile communications at Samsung, said the company's goal is to drive volume for foldables. Choi said the $999 price is about "breaking down the barriers of entry" and creating "the new standard in mobile devices as the category turns mainstream."

Samsung has managed to get the pricing down on the Flip because of its integrated supply chain. And the more Samsung can drive scale the more supply chain leverage it'll have.

The market for the Galaxy Z Flip doesn't appear to be the mobile professional, but a wider range that would typically go for the midrange Galaxy S21 or Galaxy S21 FE. With colors like Cream, Black, Green, and Lavender, the Samsung Galaxy Z Flip 3 is going for trendy.

Nevertheless, Samsung is also betting that the Galaxy Z Flip 3 will make its way to the enterprise too.

Hamshy Raveendran, Head of Product Management and Go to Market for Samsung's B2B Mobile Division, said the Galaxy Z Flip 3 is likely to make its way into the enterprise but under a bring your own device program. In an interview Raveendran said:

We have enterprise customers who are looking to offer the Flip 3 as a choose your own device option and alternative form factor for their end users. We know from our research that 60% of mobile purchases in the US are made by the prosumer.

With the Flip 3's price point and embedded tools like Microsoft Office and Knox, foldables are likely to see business adoption, she added. John Curtis, VP and General Manager of Samsung B2B Mobile, said Samsung is in the process of getting approval for its foldables on approved devices lists.

A lot is at stake. Samsung has bet big on the foldable category as a way to extend its flagship footprint and innovate its way into new categories. Remember that the phablet looked absurd at first too. The Galaxy Z Flip 3 arrives just as folks are getting tired of massive screens even though they need the display real estate for work and play.

The Galaxy Z Flip 3 aims for an audience that wants the small- and big-screen perks. Features like Flex Mode Panel, which leverages the foldable footprint to quickly choose views, and durability additions including IPX8 water resistance, Armor Aluminum, new protective films and Gorilla Glass Victus are designed to overcome initial doubts about foldables.

These are the best Samsung phones for every kind of user

These are the best Samsung phones for every kind of user

Is Samsung still the foldable king? These are the best folding phones right now

Is Samsung still the foldable king? These are the best folding phones right now