They're ideal for other gadgets, but not all external USB-C batteries put out enough power to charge a laptop on the go.
Written by Mary Branscombe on Oct. 17, 2018 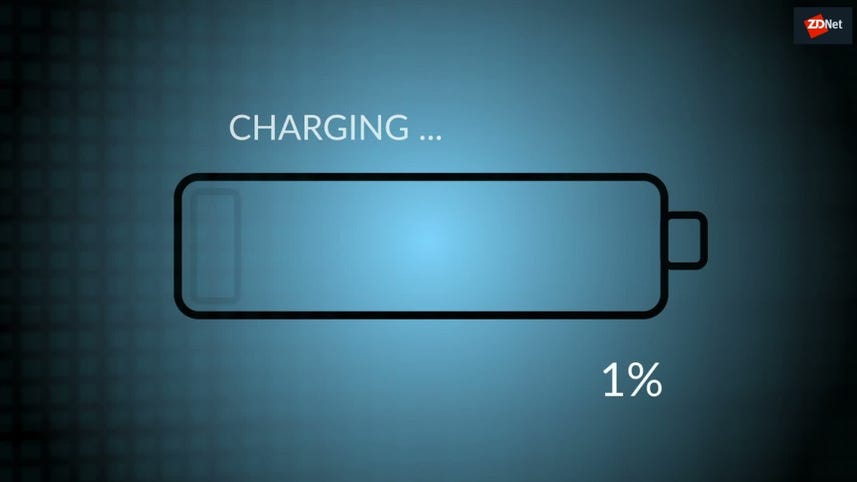 USB-C is fast becoming the default connector for new devices like smartphones, headphones, Bluetooth speakers and tablets. Apple's MacBooks have switched over to USB-C charging, but PC laptops are moving more slowly: you can charge the Surface Go over USB-C, for example, but you can't charge the new Surface Laptop 2 the same way. Since plugging into the wall isn't always convenient, can you carry a USB-C battery bank instead of a charger to get a top-up on the go? Maybe -- but you'll have to choose carefully.

The Iceworks 7000 (£19.99) is extremely portable: it's the size and weight of a smartphone (78mm by 155mm by 8mm and 160g), but has 7,000mAh of power -- more than some bulkier and heavier chargers we've tested. The integral cable tucks neatly into the corner of the portable charger, making a neat little package and meaning you don't have to remember to take the a charging cable with you.

USB-C is slightly smarter than earlier versions of the standard: it starts delivering power as soon as you plug it into a device that can draw power instead of you having to press a button, and the power level indicator lights up automatically.

Although USB-C supports two-way power connections as part of the USB Power Delivery spec, you can't charge the Iceworks 7000 with the built-in cable as it's not a USB PD device -- you need to power it through a second USB-C port on the side (there's a cable in the box for that). You can also power a second device from the second port, which means with the right cable you can charge older Micro-USB devices.

For such a small and cheap device, we were impressed with the power it can deliver. If you're charging a phone, you'll get about two full charges out of it. The 15W (5V/3A) output is on the low side for a tablet or PC, but we were able to use it to power a Surface Go. After using the Surface Go throughout the day, it was down to 10 percent battery. After plugging in the Iceworks 7000 and switching the Windows power plan to 'battery optimised', the Surface Go battery got up to 16 percent after an hour's use, with wi-fi on and OneNote and the Twitter app running. The Iceworks 7000 still had 50 percent of its battery charge left.

On a different day, we ran the Surface Go battery down to 6 percent and plugged the Iceworks 7000 in while running a more demanding mix of apps -- streaming video and browsing web pages with live captions for the video that updated in real time. This time, the Surface Go battery stayed at 6 percent for the next half hour and had charged to only 7 percent after an hour (while we continued streaming video), although the battery bank still had 75 percent charge. When we plugged in the external battery and shut the lid on the Surface Go (which puts it into sleep rather than suspending it), it recharged at about 8 percent per hour.

Compared to the Iceworks 7000, the Anker PowerCore 20100 (£32.99) is a much heftier battery bank: we like its rounded edges, build quality and the way the matte design doesn't show marks, but it's slightly longer than the Iceworks unit (166mm), more than twice as thick (22mm) and noticeably heavier (365g).

While the PowerCore's 20,100mAh capacity is nearly three times that of the Iceworks 7000, we didn't find that it delivered more power. That's because its 5V/4.8A output -- which would have matched the 24W of Microsoft's Surface Go USB-C wall charger -- is divided between its two ports, which only put out 2.4A each (although you have to read the specs carefully to spot that). That adds up to just 12W, which meant it didn't do as well when charging the Surface Go.

Because the price doesn't include a USB-C cable (you just get the Micro-USB cable needed for charging), it's also much more dependent on the quality of the cable you use with it -- and USB-C cables vary wildly in quality. The first one we tried was a short multiheaded cable given away as a promotional gift, which didn't deliver enough power to keep up with using the Surface Go. Starting at 6 percent battery power, the Surface Go dropped to 4 percent after 40 minutes' use. When we switched to a more substantial multiheaded cable the power indicator in Windows showed that the device was plugged in and receiving enough power to automatically switch to the high-performance profile, but the screen immediately went dark because it wasn't charging fast enough to keep up with usage.

Switching to a standard USB-C cable designed for phones, we were able to keep using the Surface Go for another 90 minutes, but while the PowerCore still showed almost full charge with all four indicator lights activated, the Surface Go was down to 2 percent and giving us a low battery warning.

As our tests show, neither of these battery banks are USB-C PD devices designed to deliver laptop levels of power. The USB-C ecosystem continues to be confusing in terms of how many different options and standards there are, as well as the performance levels delivered by different cables.

Because it's so small and light, the Iceworks 7000 is the ideal companion for topping up a Surface Go and stretching your working day for another couple of hours. It even fits neatly under the kickstand when it's open on your lap. When we tried it with a MacBook Pro it delivered power, but here it's better suited to being an emergency option than a regular companion.

It's easy to get confused by the high capacity of the Anker PowerCore 20100. It's designed to charge two devices at once, several times each, but doesn't do as well as a laptop charger because it splits its output between the two ports. You could use it for supplementary power and get a longer working day from your USB-C-powered laptop, but you need to plan ahead and plug it in before the device you're charging gets too low on power.

Is this the world's best power bank? The Omnicharge Omni 20 USB-C
Think of this not as a power bank, but a $200 computer-controlled USB charging station.

USB-C is a total dumpster fire because we want it to do too much too quickly
USB-C is what you end up with when you try to get a single cable to do too much across too many devices by cobbling together different standards.