The Infinity interchangeable magnetic cable supports USB-C Power Delivery up to 100W, but that doesn't mean you can just plug in and charge everything.
Written by Mary Branscombe on April 21, 2020 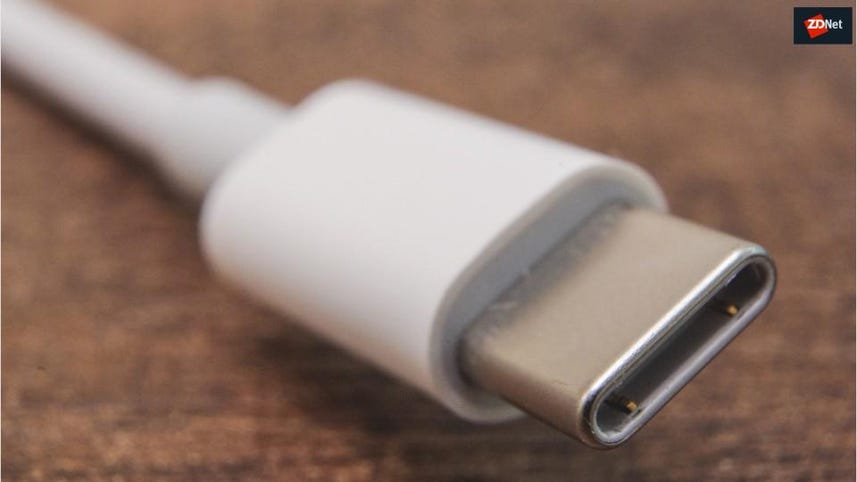 At first glance, USB-C looks as if it's going to simplify things: one port that you can plug anything into, because USB-C can support anything from normal USB power and data connections to MHL, DisplayPort and Thunderbolt video connections to laptop power (up to 100W).

The problem is that while USB-C can support any and all of those, what actually works is down to the capabilities of the port and of the cable itself (more specifically, the control chips at either end of the cable).

Some laptops have one USB-C port that supports the PD (Power Delivery) standard and one that doesn't, because that way you can use a cheaper controller chip and only have to route the power down one path on the motherboard. Different protocols have different licencing requirements, so not every cable supports Thunderbolt. And you need specific controller chips in the cable to support PD.

That's why the UNO interchangeable cable we looked at recently didn't support PD, making it an almost, but not quite, universal cable. The £46/$55 Infinity Cable (also from Chargeasap) has some nice tweaks: a cord wrap; a smaller, less bright LED on the cable so you know when power is flowing but you don't get dazzled by your phone cable at night; and the 15-year warranty that presumably inspired the name. But the big change is that it supports PD up to 100W.

The Infinity cable has USB-C on one end, with an optional ($5) USB-A adapter for when you need to use an older port; the other end is a magnet with interchangeable connectors for USB-C, Micro-USB and Lightning. The magnets are strong -- get the tip close to the cable and it snaps on securely, but if you yank on the cable the tip will come off before you pull your device off the table. That leaves the tip in your device, so the little black tool for prising it out will come in handy unless you have strong nails. If you really like the cable, it's worth getting a few spare tips so you can use it with several devices without having to get the tip out each time. That's all very like the UNO; the difference is the promise of being able to charge a laptop as well as a phone or a fitness tracker.

To try that out, we sat down with the Infinity cable, an official Apple cable, several USB-C chargers from Apple and Anker and a pile of devices -- a Surface Go, a Surface Pro X, a Surface Book 2 (Core i7 and NVidia GPU), a 15-inch MacBook Pro and an iPad Pro.

The older, 29W Air charger charged all our PD-capable devices whether we used the Apple cable or the Infinity cable. But the newer 30W Air charger couldn't power the Surface Go, the Pro X or the Surface Book 2 even with the official Apple cable, or with the Infinity cable. Apple doesn't claim that it's a PD charger, just USB-C, but we were surprised that it didn't work when the older, 29W charger did.

The Anker Power Port Atom was able to charge the Surface Book 2 with both the Apple and Infinity cables; we got a slow charger warning with the Infinity cable and not with the Apple cable, but Windows reported almost exactly the same expected charge time for both cables (23-25 minutes to go from 91% to full charge). Although the Anker website seems to suggest the Power Port Atom is a 60W charger, that's for using the USB-C and USB-A ports at the same time: when you look at the specs printed on the charger (you'll probably need a magnifying glass), it turns out the USB-C port is limited to 45W.

That also means it won't be able to do fast charging on the Surface Laptop 3 or Pro X, because that needs a 60W USB-C charger.

Microsoft told us "Chargers that are compliant with the USB PD 3.0 standard and deliver 7.5W or greater combined with USB-C to USB-C cables that are compliant with the USB-C specification will charge the Surface Pro X and the Surface devices with USB-C ports". However, you need a 60W or better charger to power a Core i7 Surface Book 2 – and ideally 100W. The Surface Connect power supply that comes with it is rated 102W: the USB-C port on the Surface Book 2 can accept up to 20V, so you'd need 20V at 5A to get similar levels and speed of charging, and there are only a handful of 100W PD chargers on the market.

SEE: How I upgraded my USB-C power banks and chargers to make them easier and more convenient to use

Microsoft suggests sticking with the Surface Connect power supply that comes in the box; that's not as important for the Surface Go or Pro 7, Pro X and Surface laptop, where 45W and 60W PD chargers work well with the right cable, but for the high-end Surface Book 2, think of USB-C as more of an emergency option.

The Infinity is a pricier cable, but the interchangeable tips make it flexible. When picking a charger to use with it, look for USB-IF certification (which may or may not be down as a logo on the charger), and in the longer term, USB Type-C Authentication, which will let devices check that the cable and charger you're using are certified and not malicious. That's part of an attempt by the USB Implementer's Forum to deal with the many unofficial, uncertified and sometimes incompatible or even dangerous USB-C cables that started flooding the market a couple of years ago. The problem was so bad that one Google engineer started a one-man cable-testing program.

Authenticated devices will also avoid the problem of USB devices that are badly designed or deliberately created by attackers to fry devices by delivering the wrong power, extract data or stalk someone by hiding a SIM card in the cable connector. But they won't make it less confusing to find which charger you need for your device until device and charger manufacturers become much clearer about power descriptions and labelling.

Tablets
Microsoft Surface deal: Save $200 on the Pro X tablet

Tablets
Back to school deals: 5 best Apple deals for students