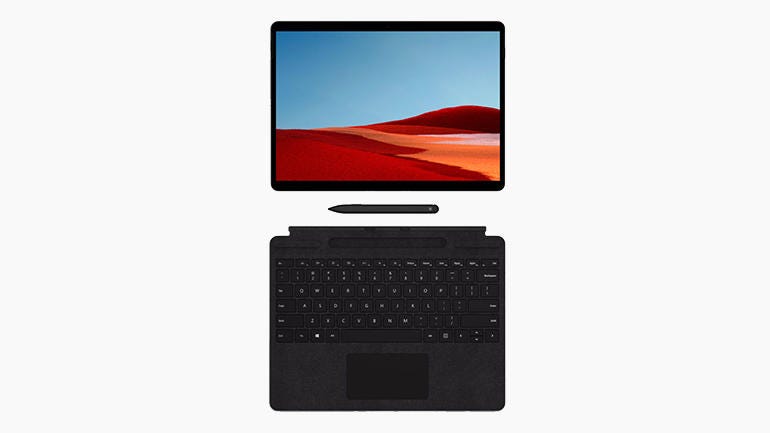 Microsoft's most recent Surface event unveiled a series of new devices, some for 2019, some for 2020. Alongside the expected refresh of the Intel-based Surface Pro was the launch of a new member of the Surface family, the 13-inch Surface Pro X, which starts at £999 ($999).

The thinnest (7.3mm/0.28in.) and lightest (774g/1.7lbs) Surface yet, the Pro X marks Microsoft's return to ARM processors after it cancelled its original Windows RT-powered Surfaces. Part of a third wave of devices using Microsoft's ARM64 version of Windows, it's a device that can give its Intel-powered siblings a run for their money.

The first thing to understand is that Windows on ARM is, for most purposes, a full version of Windows. It's been around a while, with the first batch of devices launching some 18 months ago. It's interesting to compare the performance of Microsoft's new SQ1 processor, designed in collaboration with Qualcomm, with the original Qualcomm Snapdragon 835-powered hardware, in the shape of the HP Envy x2.

At first look the Surface Pro X and the Envy x2 are very similar. Both are always-connected 2-in-1 tablet PCs, with removable keyboards and built-in LTE modems. They even have similar screens, along with support for Microsoft's Hello facial recognition log-on. But that's about it, because when it comes to performance it's like comparing apples to oranges, or maybe a Surface Go to a Surface Book 2.

Benchmarks only tell part of the story: they let us compare raw performance, but don't track everyday usage with off-the-shelf software. So how does the Surface Pro X fare as a workhorse PC?

Eighteen months has made quite a difference to the available software for ARM-powered Windows devices. You're still limited by the 32-bit x86 emulator, but with ARM64 support in Visual Studio, and with C++ and .NET able to build native ARM applications alongside x86, we're starting to see more native code in and outside the Microsoft Store. I'm running a native version of the new Chrome-based Edge browser, for example, which is surprisingly battery-efficient when hosting web apps like TweetDeck in their own windows.

It's worth setting expectations when looking at the available applications. The Surface Pro X is a device targeted at what Microsoft thinks of as 'mobile knowledge workers'. So, if you're looking for a device with support for Office and OneNote and a modern browser, then it's exactly what you want. In the month since I've started using the Surface Pro X, I've used it at two conferences with no worries about battery life, and as my out-of-office device for meetings and interviews.

It's fair to say that the battery life with the higher-powered Surface Pro X isn't what was promised with the first-generation of ARM-based Windows devices. But that's not surprising, as there's always a trade-off between power and battery life -- especially when you factor in a 13-inch 2,880-by-1920 PixelSense screen. Microsoft claims 13 hours of 'typical device usage', and I'm regularly seeing more than 20% of battery life left at the end of a working day writing with wi-fi on. And if there are issues, a USB-C PD battery pack will get me back online quickly enough.

While I'm clearly the type of user Microsoft is targeting with the Surface Pro X, as I'm writing this review on it while sat in a coffee shop, it's also clear who it's not for: gamers and developers. While the x86 emulator can handle most 32-bit games, it can't deliver the performance that gamers require, even with the SQ1's high-end GPU. It's also not a device for developers, because even though you can get 16GB/1TB models, Visual Studio remains a 64-bit x86 application for now. I've been able to use Visual Studio Code happily, although it's running in emulation until GitHub finalises its Windows ARM release of the cross-platform Electron framework.

Designers and photographers will also find the Surface Pro X lacking, although Adobe has promised ARM64 versions of its core Creative Cloud applications, including Photoshop and Lightroom. However, they're yet to ship, and Adobe hasn't announced a prospective release date.

The next release of Windows 10, due in Spring 2020, will bring a surprising new feature: support for the Windows Virtualization Platform and WSL 2. I've upgraded my Surface Pro X to the stable pre-release version, and have found that running a native Linux kernel alongside Windows works very well on my Surface Pro X. I'd recommend getting a 16GB model if you're planning on doing a lot of work in both OSs.

Microsoft gave the original Surfaces an angular look-and-feel, one that's persisted through seven generations of the Surface Pro. The Pro X is the first to abandon it for a more curved design that's reminiscent of Samsung's Android tablets and early iPads. Unlike most tablets, though, there's an element of repairability, as the Surface Pro X's SSD is replaceable. Having said that, Microsoft is an early adopter of the new M.2 2230 SSD format, so you may find it hard to find appropriate hardware.

A simple magnetic cover under the kickstand hides the SSD and the (nano) SIM slot for the LTE modem; all you need is a SIM slot ejector key and a T3 screwdriver to replace the SSD. You'll need recovery media if you're upgrading the disk yourself, as replacing it will remove the entire OS from the device.

Adding a SIM will enable the built-in LTE modem, giving you connectivity -- anywhere there's a 4G signal -- to backup the Surface Pro X's 802.11ac wi-fi. If you prefer, there's the option of a built-in eSIM and instant access to international plans via Windows' Mobile Plans app. The available services will vary based on where you are and, in many cases, it could be cheaper to get a SIM with an international data plan. Performance is good, although obviously network-dependent. I'd recommend ensuring that you mark your cellular connection as metered, so it doesn't download updates or sync large amounts of OneDrive data.

The Surface Pro X is also Microsoft's first device to make the shift to USB-C interfaces, with two ports on the right under the volume control. You can use these to charge the tablet via PD-capable power supplies or batteries (a useful way of getting power on the go). There's also a Surface Connect port for the bundled power supply and other Surface accessories, including the Dock. A surprising omission is an SD Card slot, something that's been part of the Surface Pro since launch. I'd recommend investing in a USB-C portable dock for on-the-road connections, especially if you want to use Ethernet rather than wireless connectivity.

One downside to the Surface Pro X's design is its black finish, which is something of a 'fingerprint magnet'. Fingerprints can be removed with a microfibre cloth, but in practice you're going to have to get used to them -- or buy a skin. If you're using it as a tablet, you're more likely to get fingerprints on the screen in landscape mode, as the bezels are narrower on the short edges.

There are a lot of nice touches in the Surface Pro X. If you get the Signature version of the new keyboard with the Surface Slim Pen, the flat pen will charge in the keyboard. Put the pen into its slot upside down, and the built-in magnets will flip it to align it with the charging coils. It's a bit disconcerting the first time you watch the pen move on its own, until you realise that it's doing just what it should do.

So, should you buy a Surface Pro X? The answer is, of course, 'it depends'. Microsoft has produced an excellent device for mobile workers, with a focus on Office and the web. That makes it an ideal tool for executives, for business analysts and consultants, for teachers and university research staff, and for writers like me. It's not a machine for designers, gamers, or for developers -- yet.

That 'yet' is a big question mark, as it depends on software companies and developers producing ARM64 versions of their applications. If Microsoft wants to make this new device type a success, then it needs to find a good way to bring key applications beyond its own to Surface Pro X. It'll be interesting to see if it can rise to the challenge.

Windows 10 on Arm: What you need to know before you buy a Surface Pro X