What's inside Cipriani's home office? A dedicated space and 8 years of continuous tweaks 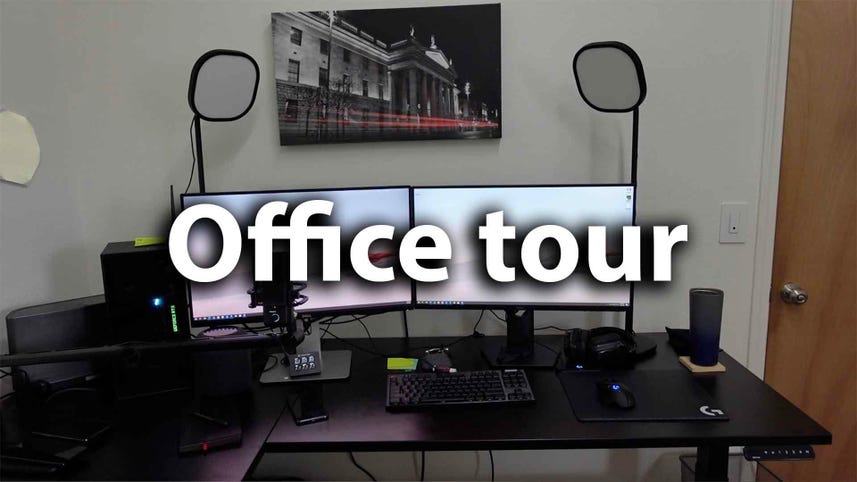 I've worked from home for the last eight years, maybe a little longer. During that time, I've changed my setup around numerous times, bouncing between MacBooks, iMacs, iPads, and more recently, a Windows 10 machine. I'm fortunate enough to have a dedicated working space, detached from my house, so when I go to work, I have to actually go outside, walk across my backyard, and go into a different building. Having that dedicated space has made it easy to transition between home and work, but it's become more difficult during the pandemic now that the kids are home doing remote learning and I feel like I should be inside helping.

Below is what I'm currently using for everyday tasks, my recording setup for Jason Squared, and recommendations for products I use that are no longer available.

For the past six years, I've used an iMac connected to a second monitor as my main computer. The combination of two 27-inch displays has been more than enough space for me to keep tabs on news, my daily agenda, and edit photos.

However, in just the last few weeks, my iMac has all but died on me. I'm in desperate need of a new one, but I'm holding off on making any new Mac purchases until I see what kind of computers Apple is going to announce this fall, powered by Apple Silicon.

After I decided it was finally time to abandon my iMac and switch to a gaming PC, I knew I needed a second monitor. So, I went with what I knew and enjoy using. I have an older version of this same 27-inch Dell monitor, but the latest model, S2719DGF, is my most recent office addition.

It has a 144Hz refresh rate, 2560x1440 resolution, and isn't crazy expensive. I especially appreciate that I can use it to add USB ports to any computer, forgoing the need for a USB hub.

Earlier this year, I built a custom gaming PC. I like gaming in my downtime, and I'd always wanted to challenge myself to build a computer. There were many lessons learned and a lot of cussing, but in the end, I succeeded.

Now, that gaming PC is my main computer, at least until Apple makes some Apple Silicon announcements.

Instead of listing out the different parts and pieces that I used, I thought it'd be good to link to NZXT's BLD lineup. You can completely customize the build, but let NZXT do all of the frustrating parts for you. The company even recently launched a Starter PC line, with builds starting as low as $699.

There was a period of time where I couldn't stand the idea, let alone the sound, of a mechanical keyboard's constant clickity-clack. But, now, it's music to my ears. The Logitech G915 TKL keyboard works with Mac and Windows and is hands-down the best keyboard I've ever used.

The keys are fast, responsive, have a reassuring click to them, and individually lit RGB colors. Its wireless, so I can move it around and not have to worry about managing yet more cables, and the battery lasts a full week of use on a single charge.

Paired with the G915 TKL keyboard is Logitech's G502 Lightspeed gaming mouse, with the Powerplay pad that wirelessly charges the mouse as I use it. The pad is optional and not something you have to have, but if you don't want to ever worry about charging your mouse, it's worth the added cost.

I'm able to customize the extra buttons for common tasks like launching my password manager or showing the desktop during everyday use, and then those buttons automatically adjust to the game and my preferences when needed.

I originally purchased Apple's HomePod to test and review, with my mind set on the fact that I would return it once I was done. I was wrong. The HomePod not only sounds great, but the integration with Apple Music and touch controls on top of the relatively compact speaker has made it a staple on my desk since it launched.

I use it all day long, every single day I'm in my office. Heck, I even use it once in a while to talk on the phone. It's quietly one of my favorite gadgets.

I recently upgraded my camera to Sony's ZV-1 Vlogger camera. Not only can I use it as a webcam to record episodes of our weekly video/podcast series Jason Squared, but I use it to record reviews, and take photos for articles.

I opted for the full vlogger package that came with a wireless shooting grip and an SD card.

When filming an episode, I have the ZV-1 on a random and really cheap tripod that I've had for at least 10 years, maybe longer. Seriously, just find a cheap tripod on Amazon, and that's what I'm using.

For lighting, I recently picked up two of the Elgato Key Light Air lights. I have one on each side of me, behind my monitors, that I can control using Elgato's Stream Deck Mini (more on that in a minute). The lights are fully customizable when it comes to lighting warmth and brightness.

The ability to control them over Wi-Fi along with their compact size is what ultimately sealed the deal for me.

For audio needs, I use the Elgato Wave:3 microphone. It's compact, has easy to use controls, and the Wave Link app allows you to make some adjustments. I particularly like the touch-sensitive button along the top to mute my audio.

I used to use a Yeti by Blue Microphones, which is also a fantastic product. In fact, I still use the Blue Compass boom arm with the Wave:3 in order to get the mic in front of me while keeping it off my desk.

To control lighting, and carry out other routine tasks on my computer, I use the Stream Deck Mini. I don't need it, by any means, but it's pretty darn cool to be able to press a button and my Key Light Airs come on.

I need to spend more time figuring out different tasks I can assign to the buttons, because I'm certainly not using it to its full potential, but it's doing exactly what I bought it for.

Another recent upgrade is the Uplift Desk. I had worked at a standing desk for years, decided to switch to a regular sitting desk and hated every second of it. My particular Uplift Desk is L-Shaped, has a couple of motors that effortlessly raise and lower it, and programmable memory for different settings. I have a preset for when I want to sit, another for recording, and a third for when I want to work while standing.