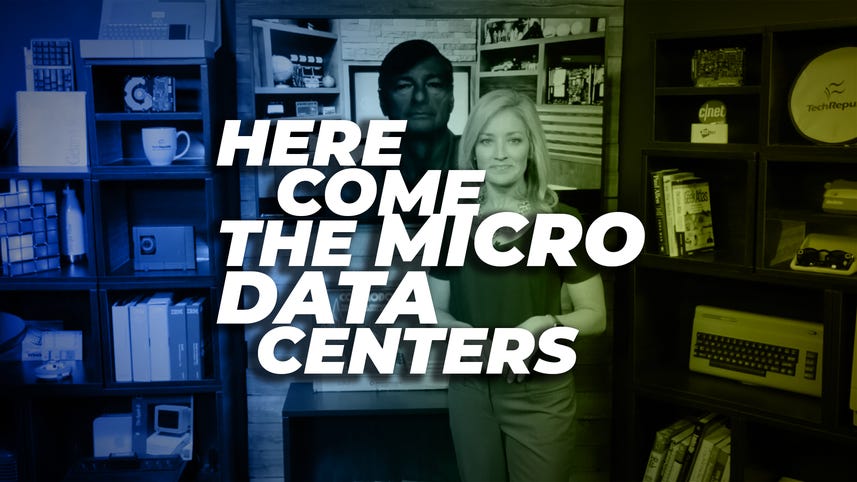 The death of the corporate data center may be a bit premature. Yes, enterprises are going cloud, but the data center could become decentralized via "micro data centers."

Micro data centers are essentially exactly what they sound like. They use racks and a much smaller footprint. Some of these micro data centers sit in cases that look like gun lockers. Others are mini racks with integrated systems. At a Schneider Electric conference in New York City this week, there was one mini data center design that sat in what looked like an entertainment center. Yes folks, in the future there may be a data center sitting in the middle of a store or bank branch.

Schneider Electric, an analytics and hardware company that aims to optimize power consumption, has been cooking up reference designs for racks and data center gear. Schneider Electric's focus is typically power and electric consumption savings, but increasingly its EcoStruxure platform is gaining traction.

You'll be forgiven for your initial reaction to the micro data center concept. At first, I smirked a bit since it sounds like another way for hardware vendors to sell servers, storage and networking systems. Yes, we know hyperconverged systems are a big deal, but micro data centers?!? Wouldn't everything go cloud eventually?

Probably not. The more I thought about the micro data center, the less nutty the concept, which has been on the runway for a few years, sounded. Here are technologies that are converging to spur demand for micro data centers:

We caught up with Kevin Brown, CTO of Schneider Electric's Secure Power, to talk micro data centers. Among the key points:

Is there demand? Brown said interest in micro data centers has picked up after a few years of curiosity.

What are the use cases? Retail is one use case because low latency compute is needed for everything from personalized marketing to IT on site to network resiliency. "Any situation where you need more resiliency on site can be used for micro data centers," said Brown. In addition, micro data centers are more reliable and low touch so local staff doesn't have to manage it. A local bank branch is another venue for a micro data center approach.

What about the cloud? Micro data centers are complementary to the cloud in many cases, said Brown. A micro data center can handle compute for localized data from devices, sensors and customers without shuttling it back and forth from the cloud. Costs are less expensive and latency is better, said Brown.

Energy savings. Micro data centers can be more efficient on power. Brown noted that one company moved compute offsite and still had higher power costs due to a network build out.

Micro data centers have a small footprint. The systems are engineered to be passively cooled and quiet. They can sit in the middle of an office and almost look like furniture. Cases and rack approaches depend on the environment.

Energy wild cards. Brown noted that most of the low-hanging fruit when it comes to power efficiency in data centers has been handled. Ultimately, efficiency will become a topic for micro data centers. "At some point the edge will consume more power than centralized data centers," said Brown.

The ecosystem. Brown said that his company has partnerships with the big data center gear companies such as HPE, Cisco and Dell Technologies. The biggest hurdle has been integrating supply chains and support. A micro data center is shipped with all the parts together in many cases or delivered via channel partners. "For us it's not about where the compute resides. Anywhere there is electricity and mission critical workloads there's a case for a micro data center at the edge," said Brown.

In other words, there's a case to be made for micro data centers. The hybrid cloud approach may wind up becoming decentralized in a hurry.

Education
You need two locks for your e-bike. Here's why and which ones to buy